A few posts back I dropped a performance of Walt Whitman’s “Poets to Come,”  a piece where Whitman precisely states his understanding that he’s shown a new mode for poetry and allied arts, but that this new mode of expression will only be fully exploited and explored by artists in the future.

So, in “Poets to Come”  Whitman foretold his legacy, but did Pound and the other founders of modern poetry in English fully acknowledge their American predecessors? I’m not sure, this is an area I haven’t studied yet. I’ve already mentioned in earlier episodes that Pound and his British allies seemed eager to point to modern French as well as ancient Greek, Chinese and Japanese influences in their Modernist verse.

Could Pound have been embarrassed by his American origins? Could could Englishmen T. E. Hulme and F. S. Flint have sought to emphasize the continental sources of their new aesthetic to compensate for their decidedly non-posh class status? That would be rash for me, who is not a scholar in this field, to claim on speculation. The strongest evidence in Pound’s case would be that as a man living outside the U. S., his cosmopolitan outlook was well-earned by his travels. Being drawn to the work of LI Bai or Sappho, or the French Symbolists requires no apologies.

Modernists who remained in America may have voted with their (metrical?) feet to more frankly explore the 19th Century American roots of modern poetry. A personal favorite of mine, Carl Sandburg certainly did this. That some of Sandburg’s longer poems sound too much like Whitman’s word-music has, I believe, disguised the degree that Sandburg was a committed Imagist, capable of writing spare, no-wasted word examinations of present objects in the Imagist manner. In his no-less than duality, Sandburg was the first successful poet to combine the innovations of Dickinson and Whitman. 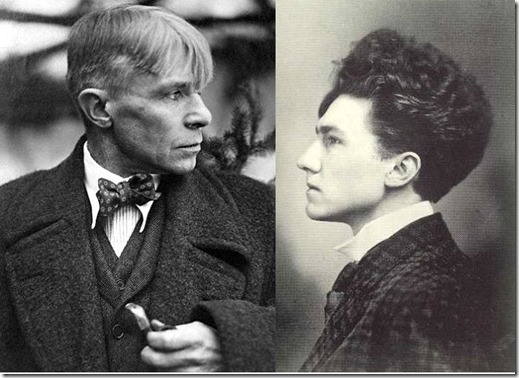 Today’s piece combines two short poems, the first by Carl Sandburg and the second by the indispensable Modernist promoter Ezra Pound. Sandburg’s part “Letters to Dead Imagists”  speaks fondly and perceptively about Dickinson and then moves on to tenderly remember Stephen Crane as a poet, who, like Sandburg, tried to combine Whitman with Dickinson. By calling them Imagists, the term Pound used to promote his “make it new” style of poetry, Sandburg is directly endorsing their claim to being pioneering Modernists.

In the second part “A Pact”  we move on to Ezra Pound’s altogether more cranky voice, where he allows that Walt Whitman had broken “the new wood”, as if Whitman was some sawmill man who had roughly hewn some timber, which he contrasts to his, Pound’s, task and skill, which is to carve it artistically.

I’m unsure how much Pound knew about Whitman’s background, so when Pound talks about the “pig-headed father” I at first assumed that famously stubborn Pound was only projecting his own considerable intransigence onto Whitman. But the poem’s closing image, an extended riff on wood and timber, indicates that he may have known of Whitman’s father’s trade as a carpenter. Pound’s own family had connections with the lumbering industry. So in the end, when Pound proclaims that he and Whitman share “one sap and one root” he’s allowing they share the American grain.

2 thoughts on “Letters to Dead Imagists and A Pact”