I can’t say what day this happened, but it was sometime in 1916 in Davenport Iowa. A well-off, Harvard-educated man in his mid-thirties named Witter Bynner was visiting a former Harvard classmate Arthur Davison Ficke in the latter’s elegant home. Besides family wealth, both men shared an interest in the arts, and both were published poets and art critics. A variety of fine-arts could have been discussed by these highly educated men, more so than any yet-to-be-invented concerns that random recently-young men might discuss today. Bynner later recalled the high-spirited discussion got raucous enough that Ficke’s wife asked the men to take it outside. 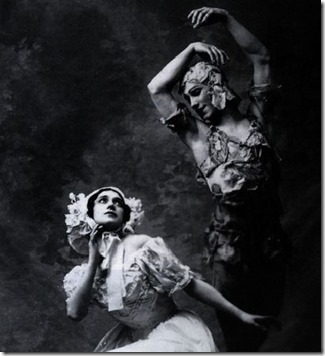 What the F.T.D! Nijinsky as the spirit of the rose

We know where the conversation started: Bynner had recently seen a new modern ballet, The Spectre de la Rose  based on a poem by Théophile Gautier with music orchestrated by Hector Berlioz from a piano piece by Carl Maria von Weber. I don’t know who the dancers were in the performance Bynner had seen, but the titular role of the spirit of the flower was first danced by Nijinsky, and the piece’s choreography ended with the extravagant gesture of Nijinsky leaping out of a stage-set window and disappearing as if he had flown off into the ether of the rose’s wafted scent. 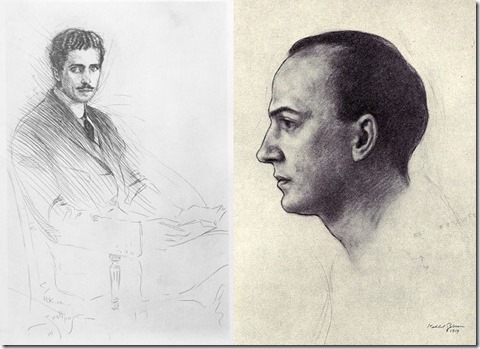 The two men retired to a cross-town hotel room with a bottle of whisky. Bynner had had an idea while watching that ballet. The romantic artistic styles of his birth century were now being challenged by new 20th Century modes. The kind of poetry that the pair wrote: carefully crafted metrical, rhymed verse was being challenged by new verse. It too had extravagant expression, but not only did the new free verse not care about symmetrical forms, it didn’t seem to care about extracting from its expression sense or meaning—things didn’t mean, they were, in these new poems. And some of the new poets were so deadly serious about how important this was! They wrote manifestos about how poetry should work without the old frameworks, yet they didn’t seem to care about how meaning worked!

The levels of the whiskey in the bottle lowered quietly as the levels of whisky in the two loud poets increased. Here was the plan: Oh, this was so good! They would write a bunch of these new poems, just whip them out while they were good and drunk and no longer bound by anything other than sounding like these new Imagist, Vorticist, Futurist poets. Great fun! So much so that nine more sessions and nine more bottles followed in close succession.

Intoxication didn’t stop these two educated, upper-class men from some structure and planning. They’d publish the poems under assumed identities. Bynner, a gay man, was to be Emanuel Morgan, a painter/poet who had dallied in Europe and dug the French poetic influences. Ficke, the straight, goyim man with day job as a lawyer, was to be an exotic eastern-European Jewish poetess Anne Knish. Later that year they roped in another well-off child of local Midwestern privilege, Marjorie Allen Seiffert, whose contributions would be signed as Elijah Hay*, who would be (like Ficke) a cisgender lawyer/poet. Ficke was drafted to write the new movement’s manifesto**, and Bynner supplied the name, taken from the ballet: “Spectrism.” Prophetically anticipating the birth a dozen years later of Andy Warhol there, these Spectra poets were said to be living in the Pittsburg area. Well, maybe it wasn’t Warhol. Maybe Pittsburg was chosen because it was half-way between the East Coast-based Bynner and the Midwestern Ficke, or perhaps they shrewdly judged it as sufficiently nowhere to evade detection.

They submitted Spectrist poems to magazines and some were published. They submitted a manuscript of the drunken hotel room poems to their own publisher and had a good laugh when it was accepted (they did tell the publisher about the hoax after the acceptance however). Perhaps the strangest publication was a “theme issue” of Alfred Kreymborg’s Others  magazine. Others: A Magazine of the New Verse  was the  publication of the Modernist Avant Garde in America, promoting William Carlos Williams, Carl Sandburg, Marianne Moore, Fenton Johnson, Mina Loy, Man Ray, H. D. and Wallace Stevens. If it was “free” or “new” or “modern,” Others was associated with it. It seemed particularly open to redefining sexual and gender roles. Recent “theme issues” before the Others’  Spectra issue for January 1917 had focused on Spanish-American poets and “A Woman’s Number” (which included work by Seiffert). 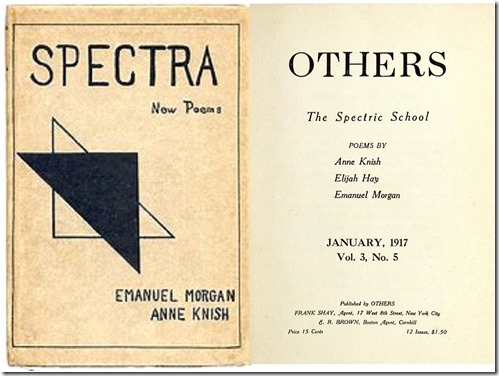 Mysteries of the Spectrism. The 1916 published collection and the 1917 special issue of Others.

What would happen if the Spectra hoax occurred this year? I’m certain there’d be considerable criticism of the perpetrators. Other than the inherent dishonesty the goes into a hoax (though “honesty” is always ambiguous in art) the audacious usurping of the Anne Knish persona by a WASP scion of wealth would draw additional condemnation for sure. Rich white men tweaking the always struggling to stay in business little magazine Others seems particularly cruel on the face of it.

You’d also expect pieces to be written about how the hoax “proves” that Modernist poetry is, consciously or unconsciously, a hoax itself; that Spectrist poetry had shown that if the right signals are made, any word-jumble will pass as art. And yes, that happened after Bynner revealed the hoax in 1918, just as it would likely happen now.

Interestingly, at least in my limited research into this, the 1918 response did not seem to include much if any anger toward the perpetrators though. Class, ethnic and gender privilege might have shielded them. Perhaps even those who might have standing to complain were cowed by the perpetrators prestige and power, or maybe they hadn’t developed an analysis of “cultural appropriation” yet. AFAIK, Ficke, Bynner, and Seiffert never suffered “you’ll never work in this town again” repercussions.

Those fooled by the hoax generally followed a line that the Spectrist poems, regardless of the author’s intent, had some vitality as Modernist expression anyway.*** As the 20th century progressed, automatic writing, cut-up, exquisite corpse, chance and computer-generated composition, found poetry, psychedelic poetry composed while intoxicated, and more would be tested as tactics. Spectra might have started in Davenport Iowa not at the Cabaret Voltaire in Switzerland, but does Dada require intent to be Dada? Can one draw a line from the Ficke’s Spectrist manifesto to the First Surrealist Manifesto?

For myself, more than the philosophical and aesthetic questions, I wonder at the personal impact, and not just on the hoaxed. Modernism had not yet triumphed in its campaign to take over poetry in the 1916-1918 era, but all three of the Spectra hoaxers began to agree with the hoaxed that when they freed themselves from their birth personas and the formal rules of poetry and meaning, that something else emerged that their poetry hadn’t seen before they put on the mask. All three later wrote some free verse as their careers continued and Modernism won the post-WWI war for literary respectability.

On the other side, I’d suppose that the Spectra hoax may have helped give impetus to New Criticism and it’s move to establish objective criteria for what makes a poem good, even if it’s Modernist in language, structure and word-music.

What of the poems themselves? I read the original Spectra book and found it disappointingly forgettable. There are some good lines, but fewer than pure what-the-hell wild improvisation should have engendered. You can laugh at the unhidden humor present in some of the poems, and I can recognize and smile at some of the references to common early Modernist tropes that they are parodying. I was drawn more to Ficke/Knish than Bynner/Morgan, and couldn’t help but think that Ficke, part-way down that bottle of whisky, might have found his invented exotic anima therapeutic.

Therefore, I’ve chosen to perform one of Ficke’s Spectra poems today, “Opus 131.”  I think Ficke—a son who grew up in a house wealth-filled with his father’s world-spanning art collection and who had followed his father into the practice of law—may have needed something more, may have wanted something that Millay or Kreymborg or Mina Loy had, even in their not-having. He may have wanted to leap out of that hotel room window, like Nijinsky in that ballet, and never come down.

*Although it’s usually not filed under “hoax” there’s a fairly long tradition of women writing under masculine pen names, from the three Bell/Bronte sisters onward. Davenport itself was home to Octave Thanet, a successful popular writer born Alice French.

**Sample lines from the manifesto: “The theme of a poem is to be regarded as a prism, upon which the colorless white light of infinite existence falls and is broken up into glowing, beautiful, and intelligible hues… Just as the colors of the rainbow recombine into a white light,— just as the reflex of the eye’s picture vividly haunts sleep,— just as the ghosts which surround reality are the vital part of that existence,—so may the Spectric vision, if successful, synthesize, prolong, and at the same time multiply the emotional images of the reader.” I can only think of the cover of Pink Floyd’s Dark Side of the Moon. 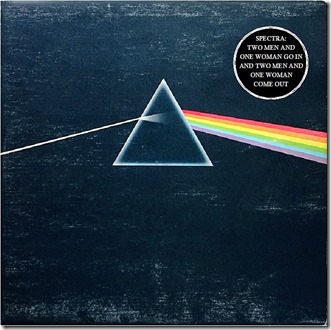 ***However, the funniest critical quote from before the hoax was revealed was William Carlos Williams remark that he preferred the Elijah Hay’s Spectrist poems to Anne Knish’s because the “Woman as usual gets all the theory and—as usual—takes it seriously whereas the male knows it’s only a joke.” Mirror upon mirror in that quote.

5 thoughts on “Two men walk into a hotel room, and…”