A couple of mornings ago, I awoke after a night’s sleep, and as I took my bicycle out to the alley to ride off for breakfast, I was surprised to see the road dusted in torn blossoms and several small tree branches cast about on the wet ground.

While I had been still and sleeping, a storm must have come up.

That contrast, the stillness and the broken change is at the heart of today’s poem by William Carlos Williams, “The Hunter.”   Williams opens his poem with an allusive image. “In the flashes and black shadows of July.” Is this the lightning of a summer storm? I thought so at first. But it might be just what one sees lying on summer grass and looking up through the boughs of a tree. The whims of a breeze or the caprices of squirrels and birds on the thin branches will flutter the leaves’ fan of shade revealing the sun in a flash.

Yet, summer “seems still.” The animals of summer appear “at ease.” But what if there is danger in the world, as in the unmet character in the poem’s title, the hunter? 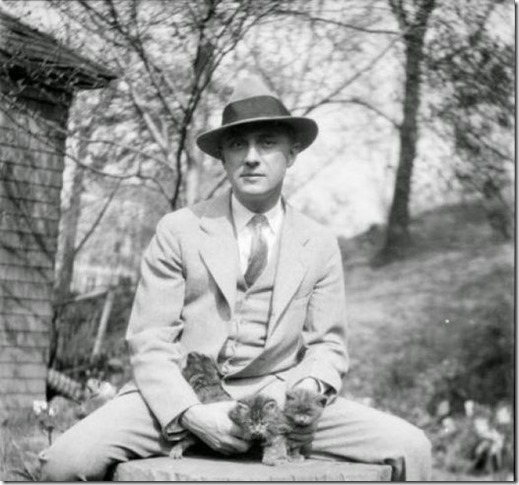 In a last-ditch attempt to increase readership of his poetry, William Carlos Williams decided to try that Internet staple: cute kittens.

For today’s music I combined an orchestral ensemble and electric guitar with an appearance of a harpsichord.  The player gadget to hear my performance of “The Hunter”  is at the bottom of this post.

I’ve noted that there has been a steady listenership for the other William Carlos Williams poems posted in the archives lately, and that helped inspire me to look for more of his work to present. As we move into summer, I remind visitors that there are over 220 pieces available here. Use the search box or just wander through the monthly links on the right.