Such is the case with the repeat number one in this countdown covering activity this past spring: Fenton Johnson’s “The Banjo Player.”  My personal discovery of Fenton Johnson goes back to reading James Weldon Johnson’s 1922 anthology The Book of American Negro Poetry.  Fenton Johnson’s work included there immediately stood out for me in its range of expression, from the hymn-like “God Is In the All Time”  through the startling confrontation of spirituality with reality in “A Dream,” to the frank and compressed expression of despair in “Tired.” I vowed to do my best to present Johnson’s range here. 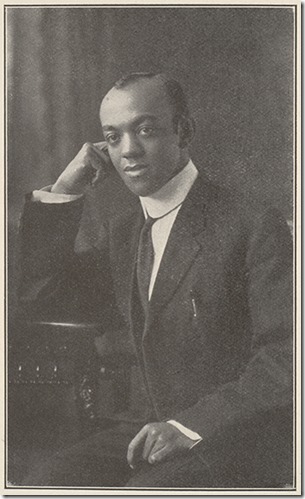 Which lead me to perform “The Banjo Player.”  It’s frankly a humorous piece, though if one pauses after the laugh, there is a serious point being made. Explaining jokes always risks creating more comedy, but the serious point embedded in the joke here is that the banjo playing songster in the poem knows something of his value, but he still feels like he’s a failure because an otherwise uncharacterized woman called him a troubadour, and he’s not even sure if that’s a compliment.

That problematic name for the banjo player is the only way we can characterize that woman who spoke it. Is she, like Fenton Johnson himself, a member of the Talented Tenth, Afro-Americans who had gone to college and who had been charged in the early part of the 20th Century to “raise” the race with their achievements? Or is she a white Modernist admirer of para-literary poetry? We can’t say for sure, and since either is meaningful, the poem works either way; but I lean to the later if only for the word she used.

As so often with Modernism, you can trace something back to Ezra Pound. Just as the Pre-Raphaelites before him, or some hipsters today, Pound looked to the past to find models for a changed, modern future. One source he used was classical Chinese and Japanese poetry, but another was medieval European troubadour poetry.

So even at his lightest, Fenton Johnson makes a sophisticated point here, one that he reinforces by using a location, “The Last Chance Saloon,” in both “The Banjo Player” and his now most-anthologized poem, “Tired.”  In the former it’s a place of some solace, in the later it’s the place were the absence of dignity is numbed.

Returning from those more important points to my issues with my performance of “The Banjo Player.”  I tried to cop a little of that Afro-American banjo tradition. It just seemed the inescapable choice for this. I think I failed, if only because I’m not a banjo player. Such things may be inevitable with the production schedule I’ve practiced with the Parlando Project this past couple of years (something I’ll talk about soon), but to be honest, I’m slightly embarrassed that this piece is listened to so much.

But that’s because of me, not Fenton Johnson. Below is the gadget for my performance of “The Banjo Player,”  but consider listening to some of the other pieces I’ve presented using the words of Fenton Johnson too.