Today in the United States is Independence Day, a day celebrated with summer cookouts and fireworks explosions. Like many obligatory holidays in our modern age, what we are celebrating becomes obscure. Yes, Americans know it’s Independence Day, but what we think of as we celebrate is a mélange of things.

What makes up this celebratory mixture? We celebrate the warmth of summer, particularly here in the northern parts of the US where eating outside is a special season. Our children are celebrating what still seems like an endless summer away from school. Stores have banners of firecrackers and flags luring shoppers who have the day off from work. And we celebrate a diffuse patriotism affordable because America is a preeminent, powerful nation. Our modern patriotism is not short of convictions—far from it, our country is prominently divided by convictions—but that too is possible by the relative wealth and power of today’s America. 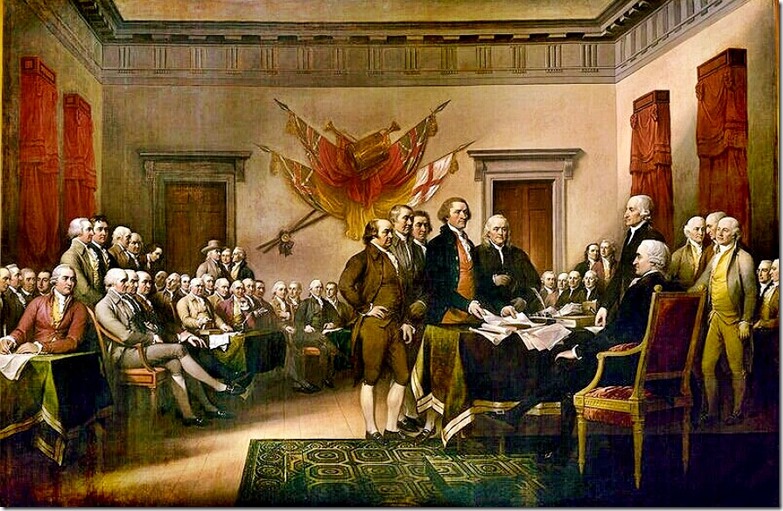 “Yes, treason against the crown and the divine right of kings, and we could all hang tomorrow,

but  can I add a part about dispensing with the noisemakers? I could use a little sleep tonight.”

But the event we are celebrating is a sharp and definite thing. 241 years ago a group of Americans started an anti-colonial movement, and in the furtherance of that, they soon were to found the first modern republic. Those who did this many years ago perhaps did not know, or even think of themselves as anti-colonialists. Some merely had issues with particular colonial authorities and decisions. Some were indeed bound up in an immense evil of colonialism, human slavery exploiting yet other peoples and nations. Still, we should seek to understand them as their idea became understood through the Declaration of Independence they signed today: that the rights of kings and empires were not heaven’s design—rather, human rights were.

And as their rebellion against kings and empires evolved, it strikingly lead—not to the setup of a new king, or a new, locally-sourced strongman—but to a new form of government, a republic. Once again, these were not perfect men—their government “Of the people, for the people” was at first for white male men of property—but they were men of such devotion to the republican idea that they would not let even the worthiest of their lot become king. That was unprecedented, and even in all the time since, not one in ten or one in a hundred rebellions immediately ends in such a way.

I know not all who read this are Americans, but those are the two remarkable things that we celebrate here in my country today. And of these two things, the second is the most rare, and the thing we must take care to carry within us: that winners are not rightfully kings.

That reminds me, there was another Independence Day tradition, one that has fallen by the wayside: the patriotic speech in the town square. I guess I’ve just revived that. Today’s audio piece is based on another text by Dave Moore, but it’s my music and performance of it. When I asked Dave about “Implications of Fireworks”  a few years back, he indicated it was more or less a diary of his impressions of a July 4th he had experienced. As filtered by Dave’s mind that day, those holiday explosions, cracks, and meat smoke brought different, less celebratory, feelings. If our independence was won with cannon and gun fire—if it’s maintained today by the same, and also with bombs made of seeds of sunfire—it is also must be maintained by, and be for, something more than that.

To hear my performance of Dave Moore’s “Implications of Fireworks” use the player below.