It’s Easter and time to close my short Edward Thomas series for National Poetry Month with a short elegy written by a poet both less and more known than Thomas in the United States.

But before I get to that, let me fill in a few spaces in the Edward Thomas story. I ran into Thomas while researching Robert Frost’s stay in England before WWI. During this time three things happened that are part of our story: Frost published his first poetry collection in London (no one in American publishing was interested in Frost then). Frost was praised by Ezra Pound as an authentic new poetic voice and he finally gains attention in America. A man who made and kept few friends, Frost made one with Edward Thomas. Accounts have it that it was Frost himself who told Thomas that he was a poet who could and should write poetry, starting off the around two-year binge of poetry writing that comprises Thomas’ legacy today.

Thomas’ poetry, metrical and rhymed like Frost’s, has, like the best of early Frost, a sense of the direct object that the Imagists (promoted by Pound) were all about. Read quickly and with casual attention this poetry can seem cold or slight. Who cares about the red wheelbarrow, or that it’s quiet in an English village when the train stops except for a spreading universe of birdsong, or that there’s an abandoned woodpile in a frozen bog? Where’s the breast beating, the high-flown similes, the decoration of gods and abstracts?

In the face of World War I, a war the old gods and abstracts seemed to cause and will onward — to the result of turning “young men to dung” as Thomas said last time — all that seemed beside the point. Thomas knew that, and knew that. He was philosophically a pacifist, an internationalist. None-the-less in 1915, in his late 30s and the sole breadwinner for his family,* he enlisted in the Artists Rifles. He had one other offer: Frost had asked Thomas and Thomas’ family to join him in America.

There’s this other famous point in the Frost-Thomas connection: what may be Frost’s most beloved poem, “The Road Not Taken”  was written about his friend Thomas and their walks about in England. Frost meant to gently chide his friend’s intense observation and concern for choices on smallest evidence, though many who love the poem today take it as the motto for the importance of life choices. Some misremember Frost poem as “The Road Less Travelled By,”  when in the text the poem’s speaker says the two roads were ‘really about the same.”  Thomas’ two roads in the matter of the war were not “really about the same.”

Thomas chose to sign up with the Artists Rifles. You may think, “What an odd name? What’s up with that?” Well, it was what it sounds like. It was founded about 50 years earlier by some painters who wanted to start their own volunteer military unit. It saw action in some of the British colonialist battles before WWI, and in-between it was sort of a shooting club, a weekend-warrior kind of thing. Sound like an old-school-tie/old-boys club? I guess it was. Even during WWI it was invitation-only from existing members. So what happened with it during WWI? It produced junior officers, the kind of lieutenants and scouts that would account for the unit having some of the highest casualty rates in the war. So, there you have it: an exclusive club where the winnowing greeter is waving you in to the trenches and a mechanized manure-spreader of a war. 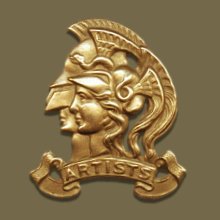 Busts of Mars and Minerva are featured in the unit’s insignia. “Artists Rifles” sounds kin to Sex Pistols or Guns & Roses, doesn’t it?

While still in England and in training with his unit, Thomas was able to mix with his circle of friends. He shipped out to France in 1917. He was killed a few weeks later, during what he thought was a lull in the battle. A late shell or sniper got him. He’d written about 100 poems, none of them published at the time of his death. His friends, other poets, wrote elegies. I know of at least three. Here’s a link to a post on another admirable blog, Fourteen Lines, which includes two of those elegies to Thomas.

One of them is by Robert Frost. Re-reading it again I think, Frost must have been so grief stricken that he’d forgotten to be Robert Frost. It’s filled with the kind of fustian crap, romanticism, and poetic diction that Frost the rhyming Modernist was all about throwing off. I tend to forget the poems that don’t give me strong pleasures, so maybe I’m overlooking something, but this elegy may be the worst poem Robert Frost ever wrote. By the time I got to “You went to meet the shell’s embrace of fire” I was through with Frost’s attempt.

Oh, if he could have concentrated on the concrete, the palpable. He may not have known it, but the records of the British military recorded the meagre personal effects found on Thomas’ body: a small notebook/journal, a watch, a compass, a copy of Shakespeare poems…and “Mountain Interval,”  one of Frost’s poetry collections now published in an expanding career in the United States.

So, to end the story of Edward Thomas, who found himself as a poet in middle age writing about how England changed as war arrived, only to die in that war, I chose to perform the second one in Fourteen Lines’ post “Easter Monday (In Memoriam E. T.)”  by Eleanor Farjeon. Farjeon, like yesterday’s Edna Clarke Hall, was a young woman enamored of Thomas** who like Frost and Hall enjoyed walks with Thomas in the countryside. While few Americans are familiar with any of Thomas’ poems,*** Farjeon wrote the lyrics to the hymn song “Morning Has Broken”  which became famous on the back of a Yusef Cat Stevens 1971 performance, and as I write this it may be being sung in an Easter service in my country. So, many Americans know a Farjeon poem, but since Yusef Cat Stevens was known as a songwriter, most probably think he  wrote the words.

Farjeon’s elegy for Thomas doesn’t’ make the mistakes Frost made. It begins as particular and offhand as Frank O’Hara’s masterpiece elegy “The Day Lady Died.”   I don’t know if it’s intended, but after yesterday’s poem of Thomas’ “Gone, Gone Again”   Farjeon picks up with Thomas’ love for apples, speaking of a package of English apples she’d sent to him at the front and of the budding apple trees in the orchard around her. Like “Morning Has Broken,” “Easter Monday”  starts in Eden, and where can we go from there?

The oblique grief of her last line? What can I say…

I may or may not do a lyric video for this one, but you can hear my performance of Eleanor Farjeon’s “Easter Monday (In Memoriam E. T.)”  two ways now. There’s a graphical player below for some, and for those without the ability to see that, this highlighted link.

*It hadn’t occurred to me, but some have pointed out that a steady paycheck, even if soldier’s pay, may have been one of Thomas’ motivations. His freelance writing work was always running to catch up with the bills.

**Thomas’ wife was open to these relationships, and was friends with Hall and Farjeon before and after Edward’s death. As I said last time, Edward Thomas’ emotional and love life would make a fascinating TV series.

***In England, Thomas is better-known. “Adlestrop”  often ranks in best-loved poem surveys there.