It’s easy to figure T. S. Eliot as an English poet—after all, while his “Waste Land”  spans history and cultures, its landscape is distinctly English and European—but he grew up in St. Louis Missouri, a middle-of-America river town.

I promised you a different poem by a St. Louis poet last time, and so now we return to the compressed lyricism of Sara Teasdale. Just four years older, and with a family that would have crossed paths with Eliot’s in similar social circles, there’s no indication that I’ve seen that these two ever met in childhood.

And oh how different in some ways this poem of Teasdale’s is. “The Waste Land”  is hundreds of lines long. Even it’s third section, which I presented in whole form a couple of days ago, takes over 20 minutes to do it justice. Teasdale concentrated on the concentrated, and her poem “Morning”  first published in 1915, is just 8 lines long, and I assay it in less than 2 minutes.

“The Waste Land”  is a cathedral of High Modernism, and a poem like “Morning”  is what? A little song? A diverting lyric? A small bit of uncomplicated thought or feeling? A mouse in the wainscoting of the sanctuary? A facet light dropped from a stained glass window? In the end we are left with the question of how big is big and how small is small. 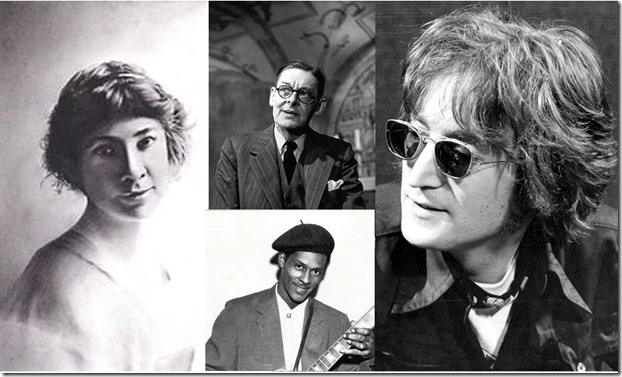 One of these cats is not from St. Louis.

But here’s one thing the two poets shared. Both of them suffered from some form of depression. Eliot’s poems are generally seen as a search for meaning. Teasdale’s poems are seen as about a search for love. The former seems grander, the later more feminine. But how different are the essences of these two consolations really?

I am an old man. I haven’t answered these questions. You, reader, may well be younger, perhaps you’ll get further in this?

I went out on an April morning
All alone, for my heart was high.
I was a child of the shining meadow,
I was a sister of the sky.

There in the windy flood of morning
Longing lifted its weight from me,
Lost as a sob in the midst of cheering,
Swept as a sea-bird out to sea.

Before I leave you with my performance of Teasdale’s “Morning,”  let me just talk a bit about how I experienced it. Like “The Waste Land”  it starts in the spring of April, our U. S. National Poetry Month. The second line may trip off the tongue in song, but it’s a strange one: “All alone, for my heart was high.” One could write an essay on that line I think. My first reading was that the poem’s singer is experiencing heightened feelings which bring forth her sense of aloneness. But it also seems to be an image of feeling a oneness with nature, as outlined in the following lines of the stanza, away from humanness. Uncannily, the conclusion of the stanza seems like the John Lennon anguished lines in his song “Yer Blues:”  “My mother was of the sky/My father was of the earth/But I am of the universe/And you know what it’s worth.”

The second stanza tells us in its second line that longing, this aloneness, has been lifted by the flooding experience of this natural morning. The resolution of the final two lines is deeply ambiguous as I read them. The line “Lost as a sob in the midst of cheering”—anyone who has suffered depression, or even a moment of intense sadness, recognizes this image, and I don’t think we can read this as a simple consolation of nature’s largeness. I feel the final line, lovely and sound-rich though it is, is also ambiguous. The sea may be home to a sea bird, but is it home for the poem’s singer?

So only 8 lines, laid sideways, infinity.

You can hear my performance of Teasdale’s “Morning”  with the player gadget that should be below. If you’re reading this post on an iPhone or iPad with the WordPress reader you’ll be wondering what I’m talking about, but if you use the box-with-arrow share/action gadget in the iOS WordPress Reader app you’ll see a choice to Open in Safari, and the player gadget and your ability to hear the audio performances will be visible in the full browser.

Thanks for reading and listening. This project doesn’t ask for funds, but if you’d like to help it consider helping spread the word about it, particularly on social media during this National Poetry Month.