When we last left-off Kenneth Patchen he was beginning his career as a proletarian poet in the 1930s, writing a strikingly prophetic (in both senses of the word) poem about what the middle of the 20th century was holding in store. I’ll leave it to you to decide if that poem also speaks of our 21st century’s future. 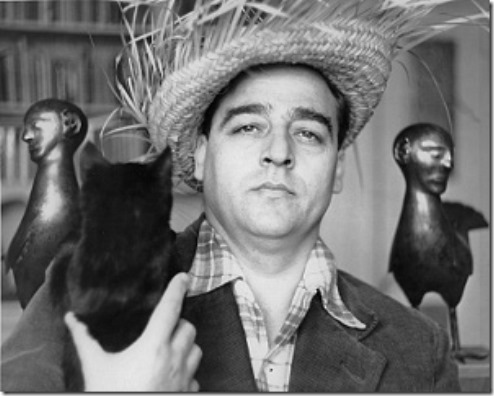 I didn’t have time to discuss that Patchen’s 1952 Wikipedia picture looks like Thurston Howell from Gilligan’s Island.

Patchen never left his concerns with society’s dangers and constraints, it remained part of his poetry throughout his career until his death in 1972, but that’s not all or even much of what he became known for. Here are some of those things:

He was a significant influence on the post-WWII independent, largely non-academic Beat explosion. The bohemian aspects of his life and outlook, as well as the ways his writing expressed itself was a key living American model for the Beats.

And speaking of the Beats, he and his friend and fellow Kenneth, Kenneth Rexroth, were enthusiastic pioneers in the tradition of performing their poetry with musical accompaniment. Though many Beat Generation poems still live on the page, I’m not alone in hearing many of them, even when read in silence, as spoken voices, a jazz group cooling it behind. Patchen was more committed to this combination than most he influenced, touring his “Poetry-Jazz” in the late ‘50s.

Obviously, that style is part of what’s led to the Parlando Project, though I wish to expand on it. Patchen too seemed open to other musical genres with his writing: for example, a longer piece for radio performance with a musique concrete score by John Cage, “The City Wears a Slouch Hat.”

American bohemian arts flowed out from the Beat era, and Beat’s immediate predecessors like Patchen, in a series of connections and mutations. Diverted poet Jim Morrison used his psychedelic ballroom singer money to help Patchen publish one of his final books. And a figure as singular-seeming as Leonard Cohen has links in his expression that seem to connect closely with some of Patchen.*

It wasn’t just music that Patchen combined his poetry with, but visual art—drawing and painting pages that were as much pictures as poems. While this has precedent in medieval illuminated manuscripts, the painter/poet/engraver William Blake, and some of Dada’s work, Patchen’s style of combining his own naïve art with epigrammatic text connects with some of the poster art of the Sixties.

One of the reasons I so like presenting figures like Patchen or Blake is their “get in the van” indie spirit. Art does not need to ask permission, it perpetrates itself anyway, figuring out a way to use the resources it can scrounge together.

And lastly, another thing Patchen became known for, even if it wasn’t as widely imitated in the Beat era, was his love poetry. It would be restrictive to think of him as just a love poet, but it was a substantial part of his writing and audience. As the billboards changed from “The Beat Generation” to “The Love Generation,” Patchen was already there with his poetry. A case in point, today’s poem “O My Darling Troubles Heaven”  performed here by Dave Moore and the LYL Band.

So, enough talking without a band. Go ahead and click on the player below to hear Dave’s performance of Patchen’s poem.

*Like what? The love poetry combined with the prophetic social dread is a recognizable Patchen trope. The combinations of art and writing, such as in Cohen’s Book of Longing  can be similar. And while Cohen’s typical poetry plus music style isn’t often reminiscent of Patchen’s, the two obviously didn’t mind mixing those arts.