I’m going to do something this time that I’ve done before but is rarely done.

I’m going to revise someone else’s poem without their permission—which I would feel bound to obtain, but the author Orrick Johns is long dead. The last time I did this, it was Rupert Brooke’s work I used, and my excuse was that his fragment that I presented here as “On the Troop Ship to Gallipoli”  was likely an early draft left unpolished due to Brooke’s death.

Orrick Johns published “Ollendorf’s Wife”  in his first book-length 1917 collection Asphalt and Other Poems.  There’s little online to help me make sense of Johns’ life, but it’s probable that Asphalt and Other Poems  collected early work Johns had written in his twenties. While most of the poems are short lyrics, Johns works there in several styles. The poems are rhymed, not the free verse of “Blue Undershirts”  that made such an impression on William Carlos Williams. The opening section, “Asphalt” is an odd set of doggerel poems in dialect. I have trouble reading dialect poems, and from my vantage point as a mid-20th century man I can’t make out what ethnicity Johns is representing in these poems. There’s a lot of dropped consonants and dere’s, dem’s and de’s. I assume these poems are intended to be proletarian poetry and demonstrate John’s solidarity.

Another section “The City”  has other poems dealing with social issues of the day, but without the distraction of dialect. It includes one of the book’s longer poems, “Second Avenue,”  infamous in its moment of possible fame for being the poem that beat out Edna St. Vincent Millay’s “Renascence”  in The Lyric Year’s  poetry contest.

Almost nothing in Asphalt and Other Poems  grabbed me. Nothing passed the Emily Dickinson test, there was no spectral cold and the top of my head remained attached throughout. While it was trying to depict its modern world, the music was awkward for me, with some forced poetic diction and conventional sentiments that made it more similar to Margaret Widdemer than Millay or Sara Teasdale, contemporaries that were writing prize-winning short rhymed lyrics at the same time as Johns. Like Widdemer, and unlike Millay or Teasdale, the poetry in this book of Orrick John’s is understandably forgotten.

There was one poem in a section titled “Country Rhymes”  that did seem to have a germ of something though.

Johns’ poem as it appeared in “Asphalt and Other Poems”

Like T. S. Eliot, Johns grew up in St. Louis, but unlike Eliot he stayed in the Midwest for college. The “Country Rhymes”  section reflects that longer experience, and nowhere better than in “Ollendorf’s Wife.”  First off, the poem is generally free verse, with uneven line lengths and sparse rhymes. And it has some vivid images. Ollendorf’s wife significantly has no name of her own in the poem. She works her farm plot assiduously, with no love showing in her face, but also as if it’s her last child. How many children, like her name, go significantly unmentioned? The fields she works, and the farm wife are “drawn together” by a “knowledge…greater” than “each other’s best.”

At its core, this poem works by the things it leaves out, fulfilling Hemmingway’s Modernist theory that you can remove the most important things in a story correctly, and by doing so depict them all the more intensely.

So out of care for “Ollendorf’s Wife,”  I revised it, intensifying that paring away of the unneeded, leaving only the cutout cameo around the farm-wife’s charged day in a life. I added nothing really, but took away words that restated something otherwise established, and rewrote lines aiming to make connections stronger. I made one additional repeat of the “day after day” phrase, because there the repetition is  the image. Though I intended to perform my revision, I generally wasn’t thinking of making the poem more “sing-able” as I changed things, but I suspect that factor worked its way in as well. 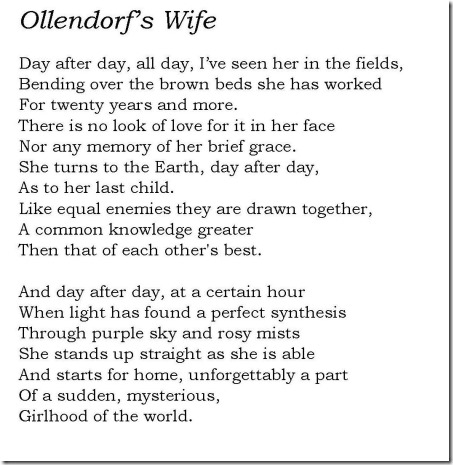 As I said at the beginning, this is not something that is commonly done. There are poems that use the subscript of “after a poem by…” but those poems that are revised and re-voiced are usually much older or in a different language than the new version. Obviously, such an act could fail as well as succeed. You are the judge in this case. The gadget to hear my performance of my revised version of Orrick John’s “Ollendorf’s Wife” is below.