Well, here’s an odd choice for a new Parlando Project audio piece: today’s song has lyrics from British-American poet Edgar Guest. It’s likely that you either know who Edgar Guest is, or you don’t. And if you do, you may be older than me, which is a rapidly declining Internet demographic, as most providers refuse to offer service across the river Lethe.*

Famous American wit Dorothy Parker wanted to help you remember—sort of—Wikipedia reminds us that she once poetically needled him: “I’d rather flunk my Wasserman test than read a poem by Edgar Guest.” But now, folks may not remember Wasserman tests either. Wit has a short shelf-life I guess.

Edgar Guest was a public poet in a way that is unimaginable today. He had a newspaper column, a nationwide radio show; and ordinary, non-academic folks clipped and memorized his poetry in the first half of the 20th century. What did academic folks think of his poetry? Well, Parker nailed it. 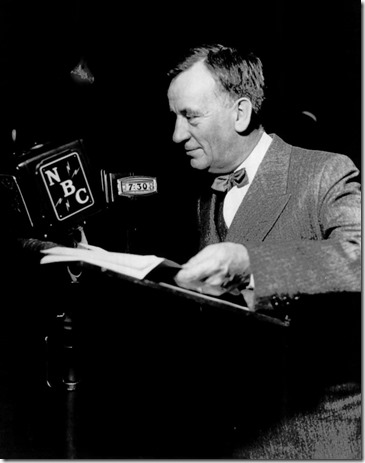 Radio. It was a kind of wireless podcasting useful before YouTube.

His poetry is often folk-humor related, and his style isn’t always very elegant: doggerel. But unlike poets whose work is always with humorous intent, some Guest poems, like today’s, are meant to make a serious point, often in a sentimental way. While there’s no common objective criteria for “good poetry” it’s still safe to say that almost anyone who would have some criteria to evaluate poetry would agree that Guest wrote bad poetry—or at best, not very good poetry.

So, what am I doing, following up some posts featuring a poet like Yeats, who has both a popular audience and a rightful place as one of the most graceful lyric poets in the English language, with Edgar Guest?   Well, it’s my opinion that “bad poetry” or poetry that has intents and methods that are not in alignment with academic critical modes, may still have some value, some reason to exist. I don’t think this is a common belief, which is somewhat odd. While there are elements of theoretical snobbery in other arts, fans of serious novels may still like a quick plebian mystery series, cinephiles may enjoy an occasional piece of mass entertainment, jazz purists or avant garde composers may have surprisingly impure playlists—but serious poetry authorities tend to view not-great poetry as a Gresham’s law issue for their endangered art form.

I went looking for a Father’s Day text in the public domain and came upon this one. What struck me about it? Well, you and I may agree it’s sentimental, but it wears its working-class heart on its blue-color sleeve. Better Modernist poems have been written on this poem’s subject (Hayden, “Those Winter Sundays”  for one)— but most of those are not available for my use today. And it’s not like poems about the world of work are all that common in Modernist lit. Instead, there are many poems about domestic life, lots about the human condition in general, erotic poems of love, visionary texts about the psychic borderlands, poems of scenic trips and museum pieces, poems about parenthood in its physical intimacy, and poems about economic and political injustice—but even the later are often absent the actual world and obligations of work.

Isn’t that odd? It’s as if poets are embarrassed to give evidence of their “day gigs.” Do we secretly expect that we are all still Lord Byron, with an inherited endowment? If we are any good should we be swinging from grant to grant, or have agents digging up the biggest returns as if we were rim protectors who can create our own shot while being a threat to sink the three from anywhere outside the arc? If we are serious, should we be beyond all that non-artistic, non-academic work?

Perhaps there are other reasons for this relative absence of the subject of ordinary work—and there are exceptions  in modern poetry—but even if we were to become one of those making a living with our pen or our mental flights alone, somewhere in our heritage we may have someone like the subject of Guest’s poem. I know I do. And from my age, from my era, I’ve even had the experience of being “the breadwinner” more than once in my life, the one working in a household and bringing in the outside income, while others do unpaid work.

This is no longer a gendered situation in our culture, but in my father’s generation this was the father’s prime job: the  job. Maybe for you this was another generation or even two generations back—we may have had forefathers. A lot of you had two parents doing “the job” (and yes, the unequal, unpaid woman’s work too) or one parent doing it all, or the most of the all.

That said, “It’s Father’s Day and everybody’s wounded.”**  This one goes out to those who didn’t get the service ribbons or the purple heart, who clocked in so we could write about time. In my case, they’re all gone now, but as Guest writes, I’ll sing “Out of this place of dirt and dust.” 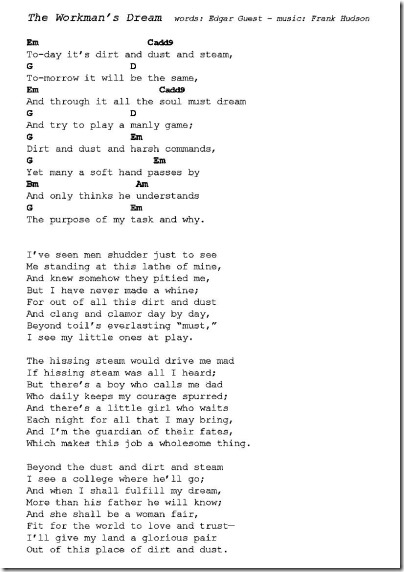 In the Broadside tradition, here are my chords for the song version I composed. I played it with a capo at the 1st fret, so the recording is in F minor. My piano, vibraphone and cello parts are simple: fifths, octaves and roots.

The player to hear my performance of the song is below.

*They say it has something to do with dog attacks on their installers, three-headed dogs at that.