Today’s post includes the 400th audio piece since this blog officially launched in August of 2016. For such round numbers it seems appropriate to use a representative selection, but then the Parlando Project’s aesthetic is to avoid formula. So, the text for today “Doubt Brings Autumn”  is from my own poem. Long-time readers/listeners here know that’s not my usual practice.

When I started the Parlando Project I hoped to create 100 to 120 of these combinations of various music with various words. The music would test my limits as a musician and composer, and the words would be focused on “Other Peoples’ Stories,” an emphasis on other writers and artists rather than my own life.*

I had no idea how enriching it would be to encounter the work I would turn to, looking not just at “Poetry’s Greatest Hits” but also at the lesser-known poems and poets. That choice made around four years ago largely by intuition and confoundedness still seems to be the right one.

I started with some pieces already done, and some already expected. Not nearly 100, but once this project ignited it was hard to put the fire out. Now at 400, the natural urge is to press on to 500.**

One key to keeping this process going and to avoid the formulaic is to introduce random or coincidental elements into the making of these things. One favorite toy of mine to play with is to intentionally seek out and explore misinterpretations of sentences. Syntax and context is a slippery thing after all, why not have some fun with it? Until last month I didn’t know what to call this kind of language play, when it suddenly occurred to me where I must have picked this concept up.

There was once a great comic duo called Burns and Allen, whose career spanned the later vaudeville stages to radio to early television. The act’s trick was for George Burns, the straight man, to report some mundane event or judgement and for the comic, his wife Gracie Allen, to then find some confounding misinterpretation of that statement. Hilarity ensued, as any attempt to put the Dada spring-snakes back into the can was met by more sproinging twisting of the otherwise obvious meaning.

Poetic license: I couldn’t find any short clips of the classic double act, but the concept extends to this scene

That realization led me to name this kind of language play a “Gracie.”

“Doubt Brings Autumn”  began with a Gracie. A blog I read regularly written by an Iowan, Paul Deaton, had in series discussed the seasonal cycle of his food garden and an orchard he works at over the past year. His posts, as well as alternative voice and keyboardist here Dave Moore’s garden probably led me to use more stuff related to gardens this past year. In one post this fall Deaton remarked that frost and even some snow had come and that “If there is any doubt, autumn has definitely arrived.”

We all know what Paul meant, but if one takes this as a Gracie, it could just as clearly mean that doubt, even in small doses, causes, brings on, autumn. That became the germ, the seed, of this poem.

It’s been through a number of versions and revisions, and I revised it yet again slightly this morning after the performance you’ll hear was recorded, but the idea, inherent in both Paul’s life (he’s contemplating retirement) and mine (I’m “retired” but working near-constantly on this project, my “garden”) was a rich one. Our doubts, our questions about how to continue and react to our own seasons, are they cause or effect? 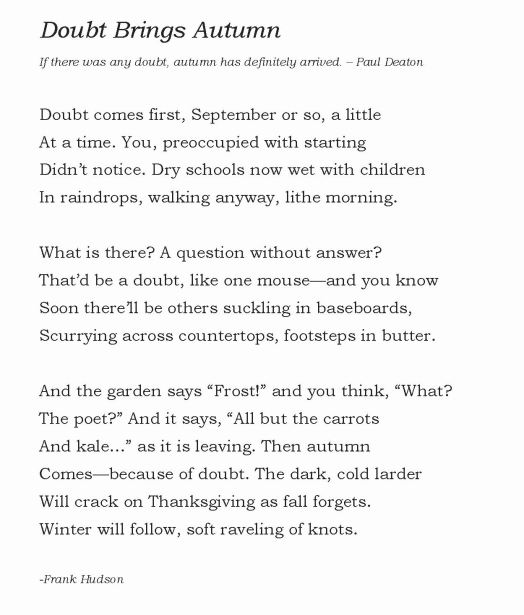 The last line works not just from its sound but gains also from another accident of English. The words unraveling and raveling are not opposites, each form of the word means the same—but raveling is the rarer word and subconsciously adds a paradoxical element that winter could  intensify instead of relaxing and untangling our unanswered questions, our doubts.

Another note on this poem in process: when I read an earlier version an accomplished poet whose work I respect reacted to the pun for frost and Frost***  with dismay. All poems and poets work from their own sensibilities, but mine steadfastly believes that humor, even the coincidental humor of Gracies and puns is unavoidable in the human condition. That other poet’s reaction was likely right, in that many (who knows, maybe most) will find the mood broken by that move in my poem. I do wish I didn’t confound them, but I somehow must.

Musically, I’ve finally been able to play fiddle rather than violin on a piece using the MIDI interface on my guitar. The sound of largo bow work is lovely, but so too are many folk traditions which saw away more insistently. The player to hear “Doubt Brings Autumn”  is below, and thanks to all that read and listen here!

*This insight came from a review of a book of Kevin FitzPatrick’s poems, where the reviewer seemed surprised and delighted to find many poems there “with other people in them.” “Why should this be rare?” I asked myself. In a musical metaphor I’d remark that I love solo acoustic guitar—just one set of hands and six strings—but what if all music or even all guitar music was only that or even mostly that? So much we would be missing!

**If I’m able to reach that number, I think that would be a good time to reassess the effort and focus it takes to do this project. If you’d like to help encourage this effort, the best thing you can do is spread the word. I have (too?) little inclination to promote this project on social media or even face-to-face. But even if I had that useful skill, I wouldn’t have time to do it.

***In my awkward defense, I pointed out that Robert Frost likely intended to pun on his own name in his magnificent “October”  where the endangered garden grapes have already suffered a leaf-wide incursion of burning frost.

One thought on “Doubt Brings Autumn”