Here’s another post in our informal series “The Roots of Emily Dickinson.” Now a title like that may lead some to think I’m some sort of Dickinson scholar—which would be a fine thing to be, but I’m not. Frankly, when I started this project a few years back I assumed I’d present some Emily Dickinson poems. After all, not only do they famously fit well to music, but she was part of the poetry canon that I was raised on. Then something unexpected happened.

When I started to dig into Dickinson poems they grew mysterious, not just the elusive mystery of their intent or even their true subject, but the somewhat more external mystery of how they came to be written in the mid-19th century in a town in rural Massachusetts without any sure models for Dickinson’s new kind of poetry.

We know how many other writers assembled their machines and what fueled them. Shakespeare and Bob Dylan worked within successful entertainment enterprises, even if they were to reshape them. T. S. Eliot had a scholar’s interest in a wide range of art and spirituality across history, and after the trauma of WWI a significant part of the culture was waiting for someone to reassemble it however dolefully, even if it was in his Cubist collage. The Surrealists were crystal-clear about their influences and the impact of Freud and psychoanalysis. The G.I. Bill after WWII and the following post-war American prosperity introduced large numbers to colleges and college towns, including some who would likely not have attended before the war. This fueled not only the Beats, but the more academic-associated American poets of my youth. The 20th Century urban migration of Afro-Americans and the Talented Tenth tactics of the early 20th century U.S. Civil Rights movement encouraged the Harlem Renaissance and similar artists.

Emily Dickinson? It’s just not so clear to me. My best guess remains that she was a Transcendentalist of some sort in a household dominated by a father that wasn’t. Transcendentalism, staunchly individualist in it’s outlook has no mandatory dogma, but the sense that the intense, even visionary study of nature reveals the deepest spiritual truths seem to me to be its core. Received truths, any established customs and traditions, are to fall before this apprehension.

However individualist in philosophy, the Transcendentalists and the Boston publishing and cultural nexus were intimately connected socially in a way that Dickinson was not.

One incident, often judged as a quasi-accident* closed this circuit. In 1862 as the 31-year-old Dickinson had begun her extraordinary five years or so of white-hot poetic composition, she wrote Thomas Wentworth Higginson and enclosed a few of her poems. A string of correspondence ensues, and eventually the two met in person.

Dickinson’s letter is conventionally seen as a “cold call” prompted by Higginson writing a magazine article in The Atlantic “A Letter to a Young Contributor.”  That article is largely unremarkable if sensible, the subject one that is covered over and over wherever there are editors who accept written submissions. Submit clean, legible copy. Re-writing is as important as writing. Remember your audience and take pity on them. Hey, the editor is on your side—they, like the writer, want to produce good work.

And here we come to the next beat in the story as it’s usually told. Higginson is often portrayed as something of a doofus, the archetypal mansplainer who can’t understand Dickinson’s greatness. He suggests Dickinson write more conventionally and doesn’t think her work is suitable for publication. Presented with one of the founding geniuses of Modern poetry, he’s blind and hesitant.

Is that so? Well, there’s a lot we don’t know. First, we only have letters from Dickinson’s side of the correspondence. I’ve delayed this post so that I could at least read some of Higginson’s writing on other contemporaries of his and Dickinson, and one thing stands out from his later 19th century accounts of his life and times: he’s the soul of discretion (obscuring names for embarrassing incidents), generous even to his opponents, and extraordinarily hesitant in claiming credit for any of the things he may have been instrumental in. As an editor and literary critic, he seems to have a fairly good and objective eye, and he does not shy from pointing out shortcomings in writers he admires. I read his essay on Emerson written shortly after Emerson’s death, and his admiration for the man and his intellect does not keep him from agreeing with judgements about the faults of Emerson’s poetry. It therefore seems likely he could have suggested changes to Dickinson in his correspondence.

How artistically wrong would those suggestions have been? How harmful might they have been to the isolated Dickinson? Even if he was “wrong” could he have been tactically right about what mid-19th century audiences would tolerate? Here we don’t know the devilish details, but we know some things otherwise: Dickinson wrote most of her nearly two thousand revolutionary highly condensed poems as this correspondence was initiated. If Higginson squelched her or convinced her to temper her individuality, he must have been bad at it. If, on the other hand, what he said encouraged and kept her going, that would be consistent with what occurred.

Here’s something else we know objectively: in 1890 he was instrumental in getting Dickinson’s posthumous-published-career off the ground.**  He did not prevent and may have agreed with the conventionalizing of Dickinson’s punctuation, adding of titles to title-less poems, and so on—but historically those editions sold well right from the start and gained Dickinson a reading public. He added his prestige to the launch with the book’s introduction where he framed her (not yet knowing how well Dickinson would sell) as a sort of art brut phenomenon:

“In many cases these verses will seem to the reader like poetry torn up by the roots, with rain and dew and earth still clinging to them, giving a freshness and a fragrance not otherwise to be conveyed.”

This may be false, even if it’s an accurate advertisement for the impact reading Dickinson for the first time may have on a reader. Yes, Dickinson was likely a more conscious and careful artist than this impression leaves us with. But it worked! Remember, there was no Dickinson tradition to be misinterpreted when he did this. To a large degree, the reason we have an on-going debate about Dickinson that more than a handful of graduate students and eccentrics like me care about is because of his work in insuring that original edition.

Now for a surprise. I did not know that Higginson had written poetry until I came upon this poem by accident while looking for June poems. I can find nothing about it, but in the absence of knowledge I’ll speculate it might be from Higginson’s college-age youth. Here it is: 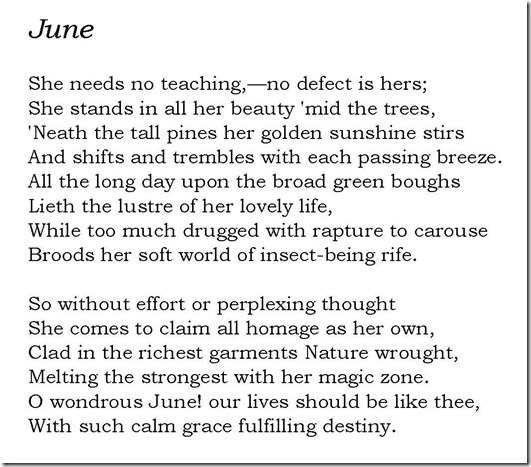 It’s a graceful sonnet. I’m not in love with the slightly over-egged consonance of the “Lieth the lustre of her lovely life” line, but I’d suspect other readers would point it out with appreciation. On the other hand, the vowels of the preceding line “All the long day upon the broad green boughs” are pleasing to me. And the poem’s fine opening line, referring to June’s summer overture, “She needs no teaching,—no defect is hers” is hard for me to not read, whenever it was written, as the proper way to approach Emily Dickinson’s genius. The ending of the octet “While too much drugged with rapture to carouse/Broods her soft world of insect-being rife” is a truly strange one, half awkward “poetic diction” perhaps necessary to make the rhyme, and half a striking William Burroughs a-century-too-early image of June on the narcotic nod as summer’s insect-being is partly suppressed for the moment.

The sestet is not as distinctive, and I wonder if “zone” was chosen for its rhyme rather than being the best word at the end of the 12th line, but overall more interesting than most 19th century American sonnets. In his “Young Contributor”  article Higginson sagely notes that duality of the critic who’ll offer criticism when they themselves are not accomplished in the arts they criticize. “People criticize higher than they attain” he says.

After all that, here’s Thomas Wentworth Higginson’s sonnet “June”  and my performance of it. The player gadget to hear it is below.

*The writer of the standard Dickinson biography Richard Sewell believed that regular Atlantic  reader Emily Dickinson was attracted to Higginson’s nature articles which he’d published in The Atlantic  prior to the “Young Contributor.”  Early Dickinson biographer Genevieve Taggard speculates that George Gould (which she identifies as Dickinson’s ex-fiancé) may have suggested Dickinson write Higginson.

**I’m still underinformed on all the details of how we got to the 1890 publication of the first large batch of Dickinson poems. Originally, Dickinson’s sister looked to Sister-in-Law and intimate friend Susan Gilbert Dickinson to shepherd the publication. Susan Dickinson said (after the successful Higginson-introduced 1890 edition) that she had a big idea for presenting Dickinson in a fuller way from the start, but the project didn’t seem to get off the ground in the mind of Dickinson’s sister who was legally the rights holder. In an example of the multivalent family dynamics of the Dickinson family, the mistress of Susan Gilbert Dickinson’s husband (Emily’s brother, Austin) Mabel Todd Loomis, was then brought in as well as Higginson to edit and arrange for the first publication of Emily Dickinson’s work. Where Higginson comes in within this series of connections and who selected who, I don’t know, but seeing the book to completion and getting it published and launched with notice and eventual surprising sales has to be presumed to be largely Higginson’s work. He was the man with the connections, track record and prestige after all.