I don’t have much to say yet about Genevieve Taggard, who wrote the words I perform today. Unlike (for example) Jean Toomer she’s not one of those writers who are only names to me, because until this month I’d never heard of her. I came upon Taggard reading John Dizikes’ Love Songs,  a lively group biography of nine women in the poetic milieu of New York City during the first part of the 20th Century. I’m only halfway through the book, and he’s starting to tell about Taggard. 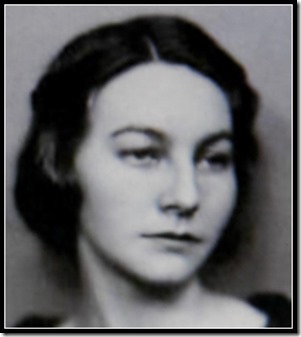 I’m told that, like Millay and Teasdale, Taggard began writing with a nuanced eye about love, that subject that combines not just desire and it’s thwarting, but also easily branches into the nature of relationships between people. I have so far read only two or three of Taggard’s poems from this era, but overviews of her career mention that after the Great Depression and the rise of Fascism, she was one of the writers who moved to direct political engagement on the leftist side, which in the ‘30s in the U.S. most often meant alignment with the Communists.

Taggard died fairly young in 1948, and her career never reached any heights to fall from. As it was, the second half of that century that I share with her was not very kind to many of those who made that move. For some their Red past was overlooked if they themselves acted as if they had overlooked it too. Some recanted their former beliefs, and of course there are reasons one might do that.*

Why would this harm an American artist like Taggard who didn’t live until the rise of an anti-Stalinist and non-Soviet Union aligned New Left? This was the era of the New Criticism, which took the stance that politics was an inferior non-Parnassian and transitory arena compared to art, and besides many of the New Critics “private” political views were conservative. Poor Taggard. Writing about love was considered a minor poet’s subject, the sort of thing non-serious women were prone to do, but leaving that and engaging in party-line political action wouldn’t gain anything from New Criticism either.

None of Taggard’s work is in print and I may never get around to finding, much less reading, her politically engaged work, so I can’t really speak to its quality.**

I figure I’ve just lost half my readers now, and I’m unsure why I brought this up, other than when I read “Everyday Alchemy”  at the end of a chapter in Dizikes’ book, I was transfixed. Is this a political poem or a love poem? This is a poem that is both heartfelt and sharp in its analysis. Like much great art it’s balanced on razor’s edge, one half clear-eyed on the unfairness of the emotional burdens placed on women by men, and one-half equally sure that society gives poor and working-class men no other peace. In eleven lines Taggard speaks volumes on this. It’s nearly 100 years old, yet has it outdated? As poetry it works well too, ringing word-sounds via consonance and assonance, fragmented phrasing in a relentless dance. This is what it sounds like when doves cry.

If you’d like to read along while you listen, here’s the text of Taggard’s poem.

When I say a love poem can be as complicated, as analytical as any, “Everyday Alchemy”  would be a great example. I’m told the 1930’s Taggard considered most of her early poetry about love as a mistaken focus after she moved on to her later political stuff. However, observers note that this poem, published in her first love-poem book For Eager Lovers, was reprinted again in her reputedly socialist realist volume Calling Western Union  in 1936. This poem works both ways.

Here’s my performance of this remarkable poem, available with the player gadget below.

*This is a complex story, and I’m skipping over so much history and passion here, but it’s one of those things that is impossible to summarize adequately in a couple of sentences.

**I am seeking to get a hold of her 1930 biography The Life and Mind of Emily Dickinson  via my local library system however.