I indicated when I first presented a poem by Charlotte Mew this month that I’d talk more about her life, but what I know is so limited and sad that I’ll try to condense things.

She was born into a family that had more than its share of illness and mortality. Three siblings died in childhood, two were institutionalized for insanity. Her father died “without making adequate provision for his family” according to the Wikipedia article, leaving her mother and surviving sister to try to scrape by in late 19th Century London. She appears to have been socially awkward and eccentric. Eventually her mother died, and then her sister, with Mew ending up being the final caretaker for both. After the death of that final sister, Mew herself was unable to care for herself. She was institutionalized and committed suicide by the decidedly unromantic method of drinking Lysol.

There is so much unanswered detail in her story. For example, the two surviving sisters are said to have vowed not to marry for fear that the insanity might be hereditary. My now largely forgotten medical knowledge/experience wonders what the exact elements were of these early deaths and the cluster of undifferentiated mental illness. Quick, idle thoughts fall to something like Huntington’s Disease.

Anyway, during her life Mew was something of a writer’s writer. Thomas Hardy and Virginia Woolf both championed her and apparently got her a government stipend for support. She was not prolific, and she didn’t write grand poetic epics or found a new school of poetry or critical theory. Still from the first time I read her poems this year I was easily struck by how different they often were. In her era there were a lot of Modernist poets who were shockingly different then—and who often still retain easily seen uniqueness today. Gertrude Stein, E. E. Cummings, Mina Loy, Tristan Tzara, Marianne Moore, Wallace Stevens, H. D., and William Carlos Williams made individual showy breaks away from fusty tradition in the time Mew was writing her poetry.

But Mew wasn’t really a Modernist as they were, not in any card-carrying sense. Her breaks from poetic orthodoxy were sometimes subtle and sometimes seem artless in both the good and bad senses of that term.*

Today’s piece “The Trees are Down”  is a good example. Although I didn’t include it in the reading, it starts with a biblical epigraph from Revelation:  “—and he cried with a loud voice: Hurt not the earth, neither the sea, nor the trees—” What follows starts off as if it’s miscategorized prose, as casual as a diary entry, a letter, or blog post. But it soon adopts a subtle rhythm, something like F. S. Flint’s “unrhymed cadences,” with a little symphony of sound verbs and some mixed in background sound from the workmen felling trees. 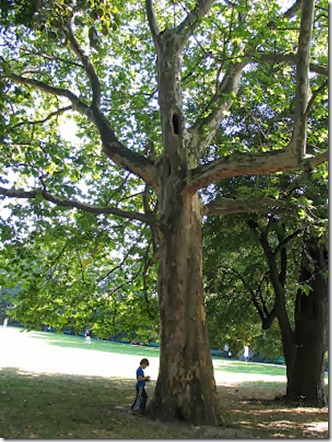 But Mew will turn from this abruptly, rather than developing that sound and theme, almost literalizing the cliché “red herring.” She recalls finding a dead rat—not at the site of the tree work, not recently—just a rat’s carcass once encountered some “long past spring.” And she remembers thinking that even this “god-forsaken thing” should be alive in spring. 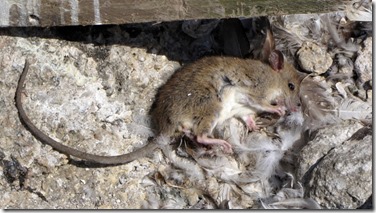 …not quite as romantic as a majestic tree.

Then she leaves this odd aside and begins a passage of irregular rhyme and near rhyme, once more looping in a sample of the workmen’s cries (“Down now!”). Nearly every phrase has end-rhyme, but we are made to wait seven phrases for a rhyme between “fine grey rain” and her return to that seemingly unconnected dead rat with a remark that except for this strange connection with the rat carcass and the death of the trees “I might never have thought of him again.”**

And then she changes once more, back to the unrhymed cadences mode as she begins to introduce her final theme. Her cadence strengthens in her last stanza, and she closes with the introduction again of a series of end-rhymes. She makes her closing case so clearly that I feel no need to make any paraphrase. That case borders on the sentimental I suppose, and I’d guess that any of the few reading “The Trees are Down”  in Mew’s own time would see it as that in their context.

Today, when we encounter those same words Mew wrote, we might contextualize them differently. First, we may not be expecting Mew to sound like a fine regular poet with even meters and regular rhymes. Nor are some of us requiring she make it new in some bold way that makes a revolutionary show of novel ways of speaking and writing. We’re are more likely than readers in Mew’s time to be comfortable with poets speaking in unique and personal but merely human terms about events up unto death. The strange anecdote of the dead rat controls the sentimentality of the death of the great and stalwart trees. We may even see a subtext here, one we’ve come to increasingly realize: that of men callously controlling and seeking to reign over and reign in nature.

In the same way that we now read what had once been seen as inconsequential “relationship issues” in the poetry of Millay or Teasdale and see important social dynamics, we might read “The Trees are Down”  now a hundred years later and see an ecological perspective.

To hear the LYL Band perform Charlotte Mew’s “The Trees are Down”  use the player below.

*Harold Monro, who published Mew’s first book of poetry in 1916, tried to describe this difficulty in Mew’s je ne sais quoi “No argument, or quotation, can prove that the poetry of Charlotte Mew is above the average of our day. She writes with the naturalness of one whom real passion has excited; her diction is free from artificial conceits, is inspired by the force of its subject, and creates its own direct intellectual contact with the reader. Her phraseology is hard and concentrated.” For a modern appreciation of Mew’s style see Molly Peacock here.