It’s my hope that some of you are newer people reading this as a result of my increased posting frequency and other activity during April’s National Poetry Month. If you’ve just found this: welcome! What we do here is combine words (usually poetry) with original music in varied styles, and then write about our encounters with those words and what we discover from performing them.

Since we’ve been doing this for 6 years and over 600 pieces, what we’ve been doing this Poetry Month has been to highlight some of my favorites from the first half of our Project. Since the composition, performing, and recording tasks are already done for these pieces, this has made the daily posts possible, but it has still been a lot of work at a time when life has made other calls on my time and concern. I’ll skip that story, but I want to take a moment to tell those other blog authors that I follow that I’ve been unable to read your posts for the past couple of weeks. I miss that, and I still intend to catch up.

Today’s piece is from a poem of love and respect lost by Edna St. Vincent Millay which is titled “Rosemary.”  As a lyric poem it’s somewhat mysterious in terms of time, place, and exact events. The opening verse’s rushes and bergamot have something of a house-cleaning feel to them. Rush stalks were used in place of rugs or other floor covering historically in homes as varied as Native American structures to European castles, and dried bergamot is fragrant and would be a nice way to make a place smell better, as is the herb rosemary, which may be the name of the speaker in the poem, and/or another way to freshen the smell of the house. Housekeeping is continued as a theme in the second verse. The final verse links back to the opening two lines, and I read it as a revelation that those tasks are being done out of duty and with a false-face of faithful servitude. After the final verse, those early fragrant herbs and fresh-straw-on-the-floor mentions now say something has gone off, is spoiled or rotten. 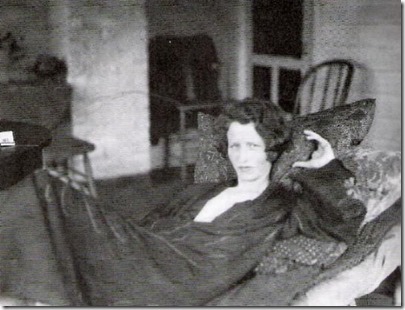 Is the poem’s speaker a wife or partner in a cold relationship? Or possibly a servant? The poem’s “gentle sirs” in its next-to-last line indicates more than one master is being acknowledged, but I can’t eliminate the idea that it could be a spurned lover chiding a partner as if she’s now a servant.

I called this poem “mysterious” rather than “vague” largely because I find Millay’s word-music enticing. Another poem with the same matter, but without that extra factor, might merit that second term. In my performance I created a jaunty tune for this enigmatic but essentially sad story. That’s a common tactic in British Isles folk music, where you can have brisk tunes telling stories of unjust and sorrowful fates. The performance ensemble is a small acoustic band: drum set, bass, two acoustic guitars — but I’m a one-man band performing that in overdubs. Listening back on this several years later I admire that I was able to make it sound like a live take by an actual band. My musicianship has remained inconsistent throughout my life, but this one works, and is able to serve the composer (me), though I wish I was a better vocalist here and elsewhere.

Three ways to hear it: a player gadget below for some of you, and this backup highlighted link if you don’t see the player. And as I’ve done so far with all these re-releases of early Parlando Project performances, I’ve created a new lyric video that shows the full text of the poem above.