Heard this one? A Chinese poet, a shadow and the moon walk into a bar, and they order wine from a translator…Oh, that was last time, and Le Bai’s “Drinking Alone Beneath the Moon.”  Well I promised I’d say a little bit more about translation in another post, as yesterday’s was already long enough.

I’ve translated some poems for this project that have few or no translations I can obtain. After all, this project is a strange mix of poems few have heard about and then “poetry’s greatest hits.” There’s a real need for translations of poems that have been overlooked, but I do feel like I’m driving my translation SUV on thin lake ice when I do them. You see, I don’t speak any language other than English. My only academic exposure to languages was high school French, and most of what I learned then was that my mouth and vocal cords couldn’t pronounce French words correctly. Whatever knowledge of French vocabulary, much less verb tenses and syntax, has faded over the decades since. About all that’s left is recognizing a French word that I would have wrestled with as a teenager, sort as if one might recognize someone at a class reunion as someone you used to know even while their name now escapes you.

So, what do I rely on since I’m monolingual? Machine translation, such as Microsoft and Google translate is helpful. When I’d translate French poems in the 1970s before any such computer/network things, I’d be thumbing back and forth in French-English dictionaries for an afternoon just to get that far, and now in a second I can get something that is a helpful start. With Chinese poems, Chinese-poems.com provides literal/one-for-one translations for the Chinese characters of a number of poems.

But these two ways are just a start. For example, here is the literal from Chinese-poems.com for a poem by Du Fu about Li Bai:

A pot of wine among the flowers
No blind date alone
Toast to the bright moon
Opposite shadows into three people
The moon is neither free to drink
The shadow disciple with me
Temporarily accompanied by the shadow of the moon
Fun must be in spring
I linger about song moon
My dance shadows are messy
Make friends when you wake up
Disperse after drunk
Endlessly relentlessly travel,
Phase Miao Yunhan

Unless one enjoys the most abstract kind of language poetry, neither is much of a poem, and neither will impress a casual reader with the need to read them or an experience to be savored. What can one, seeking to make an effective English poem, grab hold from these literals?

I almost always start with the images. What is the poet seeing or sensing? As I get some working sense of that, I’m mixing in the question of how these images relate. My primary job as a translator then is to take those things and make them vivid and comprehensible to a modern English speaker. If I fail at that, the translation will fail utterly. If I succeed at that, the result will have some value (assuming your source is a good, effective poem) even if it’s not yet a strong piece of poetry. 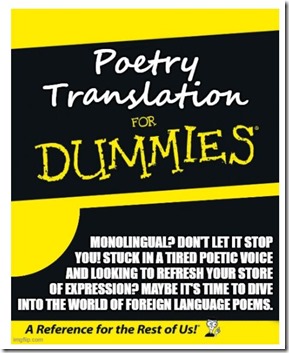 I’ve always admired folks who mastered several languages, though I’m not one of them. But, with an open heart and inquiring mind, aided by modern Internet dictionary and research tools, a poet can expand their view of poetry by the process of translating others.

As I polish my translation, I pay attention to what I began to feel are key words. I have spent an hour or two on one word,* and not having any panel of native speakers to refer to, I’ll do Internet searches looking at actual usage of the word in other writing and using online dictionaries to appreciate more about the specifics of meaning.

What about the word-music? Master poet Robert Frost famously said “Poetry is what gets lost in translation.” But Frost was a stoic, maybe even something of a fatalist, so this observation from him doesn’t mean to not try translation—it just means to accept a certain amount of failure is inevitable and to continue. If you are translating a rhyming poem from another language to English should you rhyme it, maybe even try to use the original language’s rhyming scheme? My answer to this was no—or it was, until I ran into Rimbaud’s “Eternity”  and found it too bare without the reinforcement of the ringing of the rhymes. But to mess too much with a poem’s matter of images and juxtapositions to make rhyme is a mistake in my mind. Similarly, scholars tell me that Li Bai was a formalist poet: his poetry exactly followed the existing rules of Chinese prosody that I have almost no understanding of. Even if I understood them and had a plan to represent them in English, how much can I afford to sacrifice for that? Even though the original poet had to make tough choices during creation within their language to fit the form or make the rhyme, I as a translator have taken on an additional, difficult task and will say I cannot cripple the poem to retain some shadow of its original music.

Still, poetry is  musical speech. I do try to make the resulting translation have a music in English. It just may not be much of a copy of the original poet’s word-music. In the Parlando Project I often have fun matching poets and poems to musical settings that seem, at least at first, to be inappropriate. Any word-music device that adds to the poem’s vividness can be chosen anew during the re-creation that is translation.

In yesterday’s Li Bai, I added a refrain, a repeated line that wasn’t a set line, and so it has an intoxicated repetition effect. This device wasn’t used by Li Bai. My reading of his poem was that it wants to represent the experience of intoxication progressing to the point of being quite drunk, and this musical device reinforced that.

Do I look at other English translations, if available? Yes, I do, though my usual practice was to do this after I have finished mine. I’m not sure if this is right, but I have enjoyed the gradual reveal of a poem’s meaning as one labors over the translation, and so I don’t want to unwrap the present beforehand. In case of yesterday’s Li Bai poem there were an extraordinary number of English translations available,**  and I collected all I found on the Internet and read them all. I think I may have been asking myself if another translation is even needed here, or thinking there was a possible post on how there can be so many and how they differed.

Remember that “thin ice” feeling I mentioned when one is translating a language that is not one you’ve mastered even to a rudimentary level? Reading another translation can help you check that you haven’t fallen through and trapped your translated poem under the ice where it needs to be rescued or left to die in the white page darkness of your own abandoned project pile.***  Sometimes I double check where I differ, dive deeper into the original language or what I can determine about the author’s intent or knowledge. Other times, I believe I’ve found a co-equal alternative in the poem’s ambiguity. After all, many of the more than 40 translators I found of Li Bai’s poem knew at least some of these other translations. The inarguable fact that there have been many effective portrayals of Hamlet doesn’t mean we should stop performing the play.

Ideally, in matters of culture and language, a poet-translator should work with speakers and scholars of those things. Many translators do, to at least some degree. My age, resources, project deadlines, and personality have kept me from doing this with the translations in this project, and even though collaboration is a component of some effective art, committee work rarely is. Ezra Pound relied on limited Japanese sources for his translations of Tang dynasty Chinese poets. The results were not very accurate, but they produced vivid poetry that bore, however inexactly, the power of their original verse to English language readers.

Currently, there are additional worries about cultural appropriation in such actions, perhaps even in my own. Some of it comes down to a sort of literary Gresham’s law: that less accurate work by those outside a culture will obscure or prevent work by those within it. This is an issue worthy of a few thousand words on its own, but not today. I tell myself at my level, with a small audience (thank you for being that audience!)  and a completely non-commercial enterprise for the past four years, that I’d be putting on airs if I thought I was stopping someone else. As an artist, I’ll testify too that bad or incomplete work can be inspiring. I also have enough faith in the accidental and chaotic parts of artistic inspiration that allows mistakes and misinterpretations to produce good art. And while I acknowledge the issues, I have some inner belief that cross-cultural exchange is both unregulatable and desirable.

Speaking of accuracy, of faithfulness to the original poet: I’ve feel a duty to them. Translating someone else’s work can be an intimate experience, an additional level beyond reading a poem, or even deep reading a poem several times, or performing it aloud, or memorizing it. However inaccurately and fantastically, I feel for a few days as if I’m working as an apprentice to this 8th century Chinese master. This year, following the practice of Robert Okaji, I’ve decided that more of my translations would better be labeled “After…” which is an out if I’ve misinterpreted, and a license to extend what I may have only partially absorbed.

Before I leave the subject of translation, I encourage any of you who write poetry to attempt it. Perhaps pick a poet you’ve liked in translation and double-check the English translation you know by doing your own from the original language. You may be surprised at how freely the translator chose to work, but beyond that: this feeling of co-creation, of apprenticeship and comradeship with another artist, with the choices that need to be made in your language to carry in it what comes from the other’s eyes, heart, and senses—this is a powerful spur to the poetic art. And though the English language can be proud of it’s poets, there’s a world of poetry that was spoken in other tongues. French poetry helped form my early writing, Chinese poetry has expanded the range of my older poetic voice.

No new audio piece today, but here’s a piece about how I eventually came to a theory of how my experience of a song my great-grandfather liked was a “mistranslation” of his experience of it. Oh, and like Li Bai’s poem, intoxicating beverages are involved.

*For example my great puzzle over “Hieronymus” in Rilke’s “Before Summer Rain”  poem here recently.

**One web site alone collected 43 existing English translations of this poem of Li Bai’s! Here’s a link if you’d like to see them all.

***I’ve been fairly brave or foolhardy given my lack of language facility, but there’s no reason that you have to show anyone your translations, much less perform them as I’ve done here. And while I might be audacious, other people’s work I present here is overwhelmingly in the public domain. I agree that living writers should have a say in the substantial reuse of their work, but your own private translations are not an issue.

2 thoughts on “Translation for Poets and Other Monolinguals”