Given the times we live in and the current virus-crisis, can I be excused for being a little bit late with an audio piece for World Poetry Day?

It occurs to me that if World Poetry Day was some kind of Olympian-Olympics or the World Cup in Verse, and the United States had to look over its relatively short history on the literary scene and pick it’s most powerful and representative champion, Dickinson could be our choice, even though she spent her writing career not really having one.

Indeed, when I was introduced to Emily Dickinson as a teenager back in the middle of the last century, that was the inevitable, subtitled fact about her: a recluse, a nun of poetry in effect—self-isolated in her room, scribbling odd little poems which are now seen to have at least some middling value because, well, they’re so unusual and such.*

For a century and a bit more, past-through that time when I first read her, and over our new century line by a couple of decades, readers, critics, and listeners still discover that there’s as much there in her little poems as we seek to look, and look again, for.

Take today’s spring poem of hers “A light exists in spring.”  It’s as simple and complicated as a William Blake song of experience. It’s as metaphysical as a poem by Donne. Yet it doesn’t push me, or (I think) many other readers away. It draws me in to this mystery of what it is describing. Dickinson confides in us: we are likely to feel/see this too.

I compared her to Blake with consideration, because poems like this strike me as describing some kind of mystical or limerent moment. Dickinson has a strange effect often, she can be a cold romantic, a skeptical seer, as I read her.

Something in spring almost  speaks to her, and that “almost” in her poem seems powerful—a present absence. I question my musical setting once again today. I’m not sure if I have mistaken a playfulness in this poem as a meditation upon a mystery.

Perhaps it’s my time, and much of the other world’s, this World Poetry Day that leads me there. Many of us are taking Emily’s vows this March, this spring: sheltering in place, practicing social distancing, pondering perhaps a mysterious illness’ distance short or near—and whatever our usual disposition, we may be now far from even lonely crowds in our homes and rooms. This spring is visible as a distance as far as we can see. 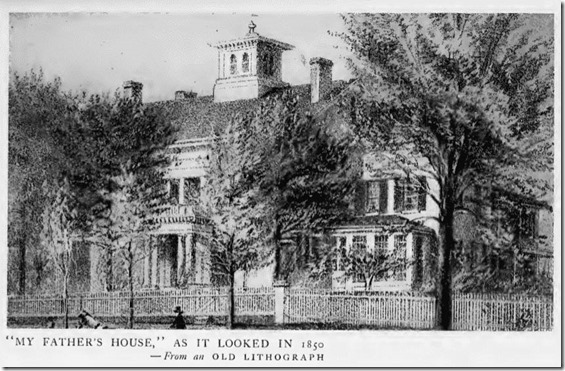 Shelter in place: Emily’s room was on the 2nd floor behind the trees in the front-left of this picture.

The player to hear my performance of Emily Dickinson’s “A light exists in spring”  is below. Thanks for listening, reading, and sharing the existence of this project.

*Scholarship has shown this blurb-level summary of Dickinson’s life was misleading. For a woman of her time and location, she was above the average line in experience (Some college! Visited other cities. Privileged and connected family in a college town located in the region of America’s greatest intellectual ferment at the time). But by her middle age the burden of a woman’s domestic role and a much speculated-on illness tied her down to the homestead, and only then, in her later years, did she become the recluse of legend.