Today I present the other widely anthologized Paul Laurence Dunbar poem: “We Wear the Mask.”  I was going to put a “now” qualifier in front of “widely” above, but that made for an awkward sentence. I think it’s worth burning at least another sentence to note that.

In looking for some more Dunbar information, I found this story told by Professor Joanne Braxton. Braxton recounts that as recently as the 1980s when she was looking to teach Dunbar poems at her university, that Dunbar’s work was out of print and difficult to find. That’s not unusual. As Donald Hall fatalistically stated in one of his late essays: the majority of poets who receive prizes and ample publication in their time will be unread 20 years after their death. Braxton, who knew Dunbar’s poems from family and Afro-American tradition, eventually saw to publishing of the first collection of all of Dunbar’s verse.

I’m sure I have readers here for whom the 1980s is “a long time ago.” It’s all relative I suppose, but this change in availability speaks to the dynamism of “The Canon,” and which poets we’re exposed to in school or the culture at large. Braxton teaches by her example that we, each of us, shape The Canon,* particularly with poetry, which is in suspended animation on the page and lives only when we read aloud, chant, and sing it. It’s up to all of us to find those poets who split our skulls, open our caged chest bones, and let us animate the slumbering dreams. 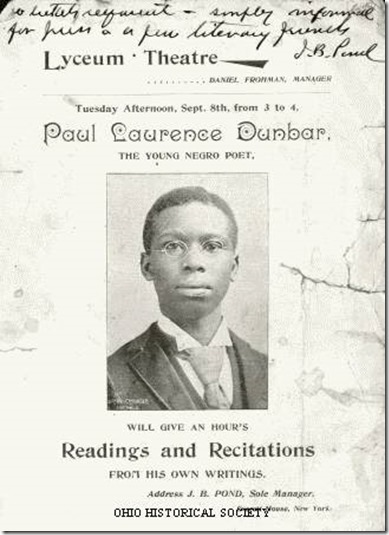 No date is known for this poster, but Dunbar looks quite young here

Braxton** and others have written eloquently on the meaning of this Dunbar poem and about Dunbar’s pioneering code-switching project to write in dialect as well as mainstream 19th century poetic forms, so once more I’ll defer to others today in those matters.

On the poem itself, let me praise its word-music. There were occasional words that were hard for me to sing or set to music, but that’s likely my fault as a composer and certainly my fault as a singer. “We Wear the Mask” is almost too pretty for its subject, but then there’s a tradition (I associate it with Celtic folk musics) of setting the saddest stories to the most beautiful tunes. Last time, for Dunbar’s “Sympathy,”  I followed that idea for my music and the fiddle melody. Now, for my explicit music today, I decided to go in a more martial cadence and ambience. Art song (that traditional method of setting poetry to music) usually avoids that mood; but one of my influences, the English language 20th century Folk Music Revival is perfectly fine with that. 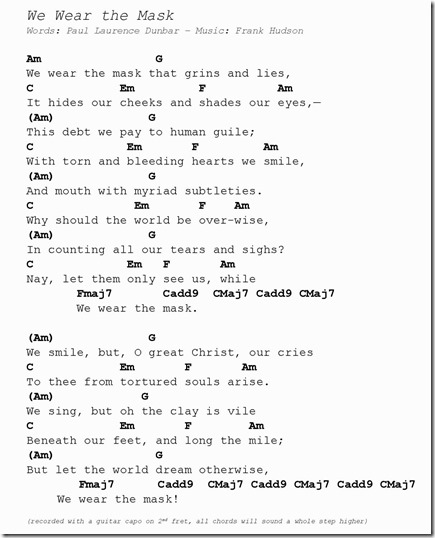 Here’s the guitar chords. The piano and bass mostly just play the roots of the chords in today’s performance. That’s a nice thing about music: sometimes simple works just fine.

In the Broadside tradition, I’ve included my guitar chords with Dunbar’s lyrics for this one. I played it with a capo on the second fret, so the chords sound a full step higher than the chord forms indicated above. My performance can be heard with the player gadget that should appear below.

*This leads to complaints that change in The Canon is “watering down,” or subject to special pleading which somehow is self-evidently inferior to one or another objective aesthetic criterion. If there are indeed multiple criteria (objectively, that must be agreed to be so) how else must we decide among ourselves what has worth, but by a dynamic of discussion, debate, disagreement? And will such actions by human minds and hearts ever lead to a static situation? How can it, if for no other reason that we continue to create poetry, music and art. Hall says, correctly on the face of it, that most will be forgotten. But like those that charge, armed or not, against the redoubts, we must move forward even if only a few will reach and cross the wall.

**One fascinating bit in the link has Braxton sharing an account from Dunbar’s widow about a possible specific inspiration for Dunbar’s famous “Sympathy (I Know Why the Caged Bird Sings)”  poem.