To my knowledge, there’s no situation, no case, in the Modernist revolution of English poetry quite like that of Amy Lowell, who for around a decade from 1915 to 1925 made herself a significant force in the popularization and dissemination of short free verse,*  yet was often derided by others writing in this style, and whose own concise verse was largely forgotten until this century.

That her name and place in Modernism survived at all, it was largely because of her brief connection with the original Imagists in London which led to a running feud with Ezra Pound. Pound said that Lowell’s promotion of the same poetic principles that he had been propounding was a descent into “Amygism.” It wasn’t just Pound, D. H. Lawrence said of her work “In everything she did she was a good amateur.” Witter Bynner, the literary-hoaxster who wanted to mock this form of Modernism tagged the overweight Lowell as the “hippopoetess.”

The young Amy Lowell. “Does this hat make my…oh, forget it…”

What was their beef? Was it that she was a woman and she was generally considered a lesbian? Even though the early-20th century Modernists often fail contemporary standards for wokeness, the Modernist movement included other women** and gay artists. Likewise, Lowell was eccentric, but that too was no mark of uniqueness in their artistic world.

I should make it clear, that even though I often write here of encountering writers from this era as I present their work, I’m not an expert or scholar on the era, and there’s a great deal I don’t know. But my quick read of the situation is that Lowell was seen by Pound and many of his cohort as a wanna-be. She came from a wealthy and prestigious family.*** She seems to have bought her way into some of her influence—but once again, wealthy arts patronage can’t be what makes Lowell unique. That was common then as it is now.

What made her unique is that she wasn’t content with being a patron, she believed herself a poet and a critic, and worked extraordinarily hard in her short career at exercising herself in those roles. Controversy may be good for short-term fame, but some of the most lauded poets of her time didn’t think much of her work as hierarchies and canons were being formed by those that outlived her death in 1925. Did they make their judgements cavalierly because they didn’t like her as a person or by reputation?

Let me cut to the chase: I don’t know. I’ve probably encountered a few Amy Lowell poems over the years, and none of them left an impression on me. But transient mood and expectation and the randomness of anthologized selections could account for that. As this project has come to use a lot of poetry from Amy Lowell’s contemporaries, I’ve figured that someday I should tackle one of hers if I found something I thought I could do something with. And this fall, her poem called “November”  was brought to my attention.**** 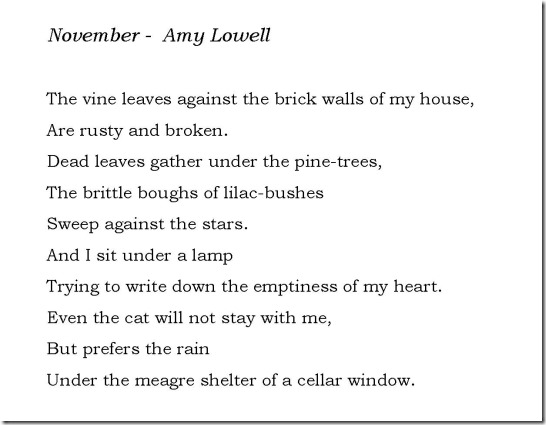 I can’t find any good Internet links to this poem, so here it is.

What did I notice about it? “November”  follows the style of the early Imagists, including the one thing that I’ve come to recognize about early Imagist writing that later Modernism came to reject: the modesty and directness of its statements. You could knock Lowell and say that when she wrote this she had Pound, T. E. Hulme, F. S. Flint, H. D., and so on to model this poem on. But if you believe, as I’ve come to, that this mode of poetry was abandoned too soon for longer, more elaborate and esoteric statements, then continuing to use those valid methods is no crime.

The trick of this kind of compressed poem is how to be simple and subtle at the same time in some way that the reader will find a working expression of beautiful. After finding “November”  worthwhile, I quickly looked at a few other shorter Lowell poems and I’m not sure she consistently manages that, but I believe this one does. Even famous and much anthologized poems in the Imagist style can be read quickly as superficial “Is that all there is?” poems. Their simplicity asks for a engaged reader, not one blown-over by some kind of surface filigree.

As with our other autumn poems, this one touches some common tropes: leaves, bare branches, dark, rain. But Lowell keeps this fresh, where many other poems would seem to just be checking off the boxes. The leaves’ color is secondary, we are subtly asked instead to hear the sound of the crisp leaves rattling against the walls of the poet’s house. Yes, there are fallen leaves too, but they gather under the evergreen pines, sheltered there. The lilac bushes sound-move with the rich word “sweep” against the overhead starlight.

And that translates then to an interior scene where the sheltered poet is too under the lights, a lamp, writing, perhaps handwriting with a sweep of the hand. And another unshowy, but well-chosen, phrase says what the subject is: “The emptiness of my heart.”

Let’s pause there for a moment. Is that a simple epithet for longing? Yes it is, but there are others for that too that weren’t chosen, and “The emptiness of my heart” is more ambiguous than most, for it may indicate a feeling of unworthiness and unreciprocity too—but then to think to explore that, to write of it, to experience it in an autumn moment, is a self-reflection that a callused always cold and empty heart will never do.

The poem’s closing image, following up on that, gives us one more sheltered, or barely sheltered thing: the cat who “will not stay with me” and is huddled in a window casement.

In summary, there is considerable complexity of feeling encoded in these images without the emotions being explicitly named and listed, but rather invoked in the Imagist manner. And the poem hides its craft so that one may not notice it reading quickly, particularly the subtle repetitions in the three scenes. I chose in my performance to repeat the writer under the lamp scene once more at the end to emphasize that I heard that key point the other two scenes turn around.

Musically, I worked on this performance yesterday which was Joni Mitchell’s birthday, so I wanted to try something in an unfamiliar alternate tuning. And today is Bonnie Raitt’s birthday, so it was good that the one I settled on (G minor DGDGBbD) worked well when played with a bottleneck slide. You can hear how Amy Lowell worked with that music using the player below.

*A year after her death in 1925 she was awarded the Pulitzer Prize for poetry, and besides editing and helping to publish several anthologies of Modernist verse, she promoted it by popular lectures and articles in mainstream publications. Louis Untermeyer in his summarizing American Poetry Since 1900  published in 1923 says that “No poet living in America has been more fought for, fought against and generally fought about than Amy Lowell.” But to speak about her poetry (which he does praise) he writes first about her work as promoter and provocateur: “Her verve is almost as remarkable as her verse” indicating that the element of celebrity and controversy was already masking her actual poetry.

**Oddly, the path in the 20th century seems to have been to increasingly under-rate, value, and remember women poets of the Modernist era as the century went on. By the time I came along to encounter Modernism in school 50 years later it was a sausage-fest—but the 21st century is working to re-evaluate that. Canons and reputations are one thing, but every poem and its poet lives or dies each time a reader encounters it. That’s always a present act.

***Some of the Modernists came from what appear to be upper middle-class families, though of those, some had broken family ties and their financial support in some way. How much richer was Amy Lowell? I don’t know for sure, but I suspect noticeably so. Wealthy and gay poet Bynner had to reach for the body-shaming to find something to ridicule Lowell.

****Once more, I first saw this poem at the Interesting Literature blog.