Let me introduce newcomers to one of this project’s “finds,” the little-known early 20th century English poet Charlotte Mew. Of course, I didn’t really find her, some of her English contemporaries did, and they waged an unsuccessful campaign to bring her work to greater attention. Among those who thought she deserved more attention: Thomas Hardy, Virginia Woolf, Siegfried Sassoon, Walter de la Mare, John Masefield, and even Ezra Pound.

Her poetry touches on some different styles, but what unites it is a skeptical and iconoclastic attitude. She herself seems to have been something of a sui generis outsider, and her poetry reflects that, frequently focusing attention on outsider characters, and her poetry often makes unusual arguments or turns—and I suspect that’s the reason her poetry didn’t catch on. Even her era’s rebels like T. S. Eliot had a ready hook to grab attention: the trauma of WWI and the rise of a modern heterogeneous urban society and industrial economy were enough of a shock to the system that even the most high-brow and arcane poetic examinations had some access to the reading public’s attention. Particularly in America, there were a number of women poets who examined love and relationships* in sophisticated ways that were widely seen then as access to that mysterious creature of the era: “The New Woman.”

Mew didn’t really do the former much, and her take on love didn’t seem to always align with expectations, for she was noticeably androgynous as a person and as a poet.

So, what does today’s piece, Mew’s “Not for that City”  deal with instead? Glorious Heaven, and in language and imagery that would make for an ornate hymn about the rewards of same. Except it’s not saying that’s what some “we” really want.

The poem instead says that what “we” want is rest, not a surfeit of glory and splendor. 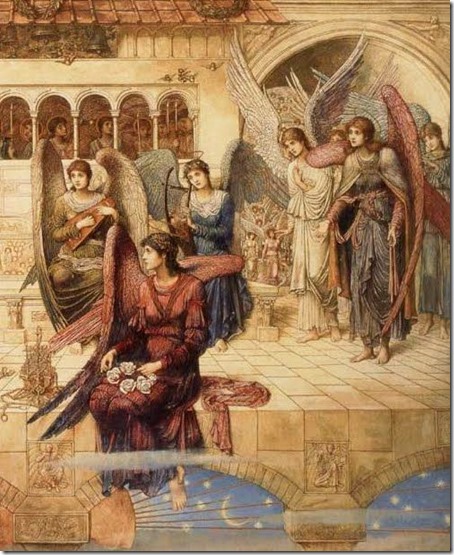 Yes it’s nice and all, but I could use some alone time.

Who’s the “we?” I’m not completely sure. Mew lived a somewhat weary life with long-running caretaker roles. Is she speaking of the poor and working classes, though she never names them as the “we” as such? Is this simply the testament of a religious skeptic? I can’t say for sure, but it works even if this isn’t determined.

I struggled long on the musical setting of this, completing two different sets of music, and then after choosing the music finally used, trying mightily to realize a full voiced, almost operatic singing line. That failed miserably, I just don’t have the voice or access to anyone else who does. The version you’ll hear with the player below is left with a track of my shabby talk-singing which is simply the best I can do to present this. I still think it’s worth hearing, and you can with the player gadget below. Full text for those who’d like to read along is here.

*We’ve presented some of them here: Edna St. Vincent Millay, Sara Teasdale, Margaret Widdemer, Mina Loy and Elinor Wylie. Being seen as “love poets” probably helped them with general audiences that still existed in the early 20th century for poetry, but then caused them to fall off the literary map later in the century which increasingly admired and required either political and philosophical advocacy, or a devotion to “serious and universal topics”—which for some reason did not include women’s observations of sexual and romantic politics.