I’ve been unable to do as much as usual with this project for the past month for several reasons. One of those reasons was a trip to Massachusetts, which if this was a normal blog would have already generated posts of the travelogue sort. However, this project is about two palpable things, music and words (mostly poetry), that can’t handily be walked along, though you can tour their containers and neighborhoods. Perhaps that trip, in an indirect way, will generate pieces yet this summer.

I was finally able to visit Amherst and the house where Emily Dickinson lived nearly her entire life—and today’s piece uses words from one of Dickinson’s poems—but long-time listeners will know that Emily Dickinson is already a favorite source for words here.

No house, no state, not even any time or country can explain the genius of Emily Dickinson. For reasons of brevity, I’ll try to summarize by saying that she created and entirely new form of poetry, powerfully compressed, elusive and still approachable, and wholly without precedent. The things scholars can trace as influences can be found in her poetry, but no one else made Emily Dickinson poems out of that same stuff. And her poetry has largely not become obsolete. Over 150 years after it was written it still seems modern, maybe even more modern today than it seemed to the early 20th Century Modernists 100 years ago. 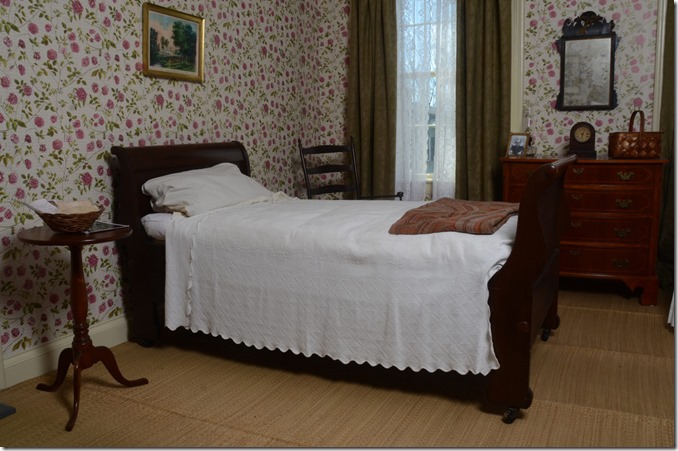 I’m attracted to shorter poems that unpack into larger things, and “Ample make this Bed”  is that. It’s short even by Dickinson standards, eight lines, 34 words. If one pauses to puzzle at this meaning, the imagery of the grave is what comes to many reader’s mind. It can be read as a shorter companion to one of Dickinson’s most famous poems “Because I could not stop for Death,”  but with a bed replacing the longer poem’s subterranean dwelling. However, besides its greater concision, “Ample make this Bed”  is using another poetic form, one different from her longer poem.

“Ample make this Bed”  is an aubade.

An aubade is a poem where two lovers wish for the morning to never arrive. Since it is, in fact, arriving, they will deny it, wishing for their night together to remain forever. By using this traditional poetic trope, Dickinson has thrown a rich ambiguity into her 34 words. Although Christian religious belief has its variations, the traditional judgement day is the day of eternal salvation and the universe’s perfection. “Ample make this Bed”  compares the morning of divine perfection to the morning that separates the lovers in an aubade.

Is this a statement that the sensuousness of human love can be judged greater than eternal salvation? Or is it a puritan statement that any such love will face its final end and judgement? Could it even be both, balanced on a knife’s edge?

Look too at two of those 34 words describing possibilities of this bed. Its Mattress, where the body rests, may be straight. The body has a straightaway lifetime. The Pillow, where the mind inside the braincase rests, may be round, a circular line that doesn’t end.

Dickinson puts her poetic thumb on the scale with the most beautiful line in the poem: “Let no Sunrise’ yellow noise.” The poem has been puritan with its rhymes until this line, although elusive near-rhymes are present in the first stanza. Now it lets in richness, a rhyme internal to the line, before proceeding to the final perfect rhyme in the last line. Besides the line’s sound, the dawn of eternal judgement is— what?—so much noise. If Keats’ second inversion is so, then beauty is truth—and Dickinson may be indicating her thoughts on the matter.

Musically, I performed this in waltz time and I repeated the first stanza to add some sense of the eternal.  You can hear the performance with the player gadget below.