We return with the next three in the count-down of the most listened to and liked audio pieces of last Winter. Like last time, all poets who worked in the 19th Century, but in this group, all men.

Two out of the three today are from the British Isles. In may be no surprise, given its head start in English literature, that Britain is an outsized contributor both in words to be used and the Parlando Project’s reader/listenership.

I’ll be taking my second, short low-budget trip to London this month, and I’m frankly not sure what I will find this time, other than planning a side-trip to Margate to see the Turner art museum there and its small exhibition commemorating Eliot’s “The Wasteland” which was partially written in Margate. I’ll no doubt re-visit the Blake room at the V&A, and who knows, maybe I should try to find that alley beside the Savoy Hotel? 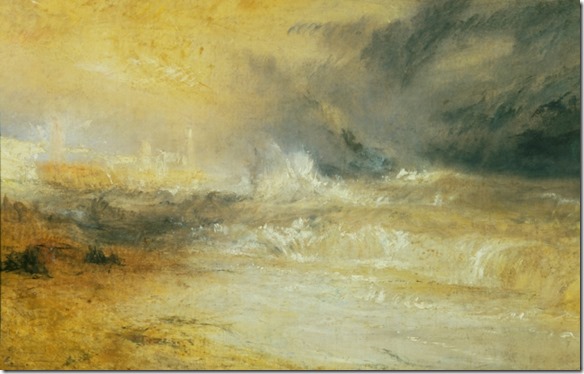 The London forecast calls for rain, hopefully not JMW Turner stormy though!

When I posted this for New Year’s I noted Tennyson’s level of fame when alive, something that even the most popular Instagram poet cannot reach now. What I found out afterward was even more intriguing, that this section of his long poem “In Memoriam A.H. H.”  has become a tradition in Sweden to be read at the turn of the year, sort of how the Times Square ball-drop is ceremoniously repeated in New York, or how Guy Lombardo would once appear with his Royal Canadians near the top of the hour on TV to play a Scottish tune.

As evidence of Tennyson’s fame, I noted that my little Iowa hometown had a major street named for him when it was platted back in the 19th Century. Eventually the town and it surrounding farms were settled largely by Swedish immigrants. The Tennyson and bell-ringing tradition in Sweden started in 1927, long after the town was founded and settled, but wouldn’t it have been good in the town’s heyday if the farmers, shopkeepers, and schoolchildren had gathered on the sides of the street on New Years Eve to hear a poem?

Instagram poets get knocked for the shortness of their verse and it’s focus more on remediation than demonstrating literary skill. Tennyson built “In Memoriam”  into a book length series of poems, but his focus too was on remediation, in his case, of grief.

3. The Wild Swans at Coole

Yeats was Irish, and for decades I’ve met monthly with a group of poets the majority of whom were Irish-Americans. Yeats seems to have seamlessly transported himself between the 19th and 20th Centuries, changing so smoothly that he could not be observed changing. Somewhere around the turn of those centuries he decided that poetry should be chanted (not sung) to music, and yet we seem to know little about how exactly that sounded. Contemporary reports (and that’s what we have, there are no recordings I’m aware of) were decidedly mixed, even derisive, and Yeats eventually set that quest aside. The recordings of Yeats reading that we do have are from decades later, and in them there may still be traces of that concept audible in his, by then unaccompanied, reading style.

Yeats warns listeners that his chant may not necessarily enchant.

Reports also tell us that Yeats suffered from a difficulty carrying a tune, much as I do. His chanted, not sung, idea did not come from that he tells us, rather it came because conventional art song had too much ornament and melodic elaboration, deducting from the inherent music in the words.

In the course of the Parlando Project I take various stabs at what Yeats was trying to do, recreation in the literal sense, trying to create from the ancient and natural connection between music and poetry some combination that doesn’t privilege one over the other. Sometimes it’s spoken word, sometimes it’s “talk-singing,” and sometimes I think it necessary to sing.

I avoid apologizing for my musical shortcomings. It never mitigates anything anyway, and I’ve always found the humble-brag distasteful. I’ve hesitated at—and decided against—releasing performances most often because of failures of my singing voice. This performance came close to staying in the can. At times it works, not from my skills, but because there’s a certain match in the failings in the voice and the meaning of the poem.

2. My Childhood Home I See Again

One last 19th Century poet, an American. Long-time readers here will know that US President George Washington’s teenage love poem “Frances”  has been a surprisingly persistent “hit” with listeners here. It didn’t make the Top 10 this season, but we now have another Presidential/Poetical contender in Abraham Lincoln. If Washington was all youthful alt-rock persistence, Lincoln is more goth, with a downcast you-can’t-go-home-again tale of all he finds missing when he re-visits his hometown in his thirties.

Lincoln’s “My Childhood Home I See Again”  was very close to the popularity of the Number 1 this season. If didn’t count the substantial Spotify plays the Number 1 received, Lincoln would have topped this season’s list.

I posted this for what was once a common U.S. holiday, Lincoln’s Birthday. Also on this season’s Top 10 are the Tennyson New Year’s post and Rossetti’s Christmas song posted on Christmas Eve. Not sure if this is a trend, but listeners did like the holiday poems this winter.

Tomorrow, the most popular audio piece.