I’m continually a few days behind in the past month or so, what with Winter holidays and other appointments and responsibilities. Some of the audio pieces have been recorded especially expeditiously, and another part of this project has been neglected: the searches I take to find words (mostly poetry) I combine with original music.

Because publishers do not respond when I ask for permission to use works that may be in copyright, I am constrained to use written work outside of copyright, typically works published before 1923. Although I respond to, and use, poetry written in various eras, my desire to mix in more contemporary voices leads the Parlando Project to use a lot of poetry from the first two decades of the 20th Century. This is not altogether a bad thing. I happen to like a lot of what these pioneering Modernists did, and in some cases, what we find in the mouth of the “Post-Modern” poetry mainstream delta is worthy of reconsideration in the light of the Modernists. Have stagnant currents deposited silt and detritus at our end of Modernism, its own Mannerism that says that poetry must be written in a special poetic language and syntax, because that is the language that serious poems use? If popular poems are to be about recounting internal personal experience and serious poems are to be about hermetic personal language, what is missed?

Maybe we answer these questions by doing, as we answer other questions (even ones we never ask) by living. In my case, the doing may be by continuing this Parlando Project.

So earlier this month, returning to the research that goes on behind the scenes of this blog, I read two old anthologies of poems now in the public domain, looking for some new material. In one I was attracted to yet another piece by Carl Sandburg, a poet I believe should be reassessed in our time, but hardly an unknown, particularly to readers/listeners here. In the second one I came upon the work of Fenton Johnson for the first time. I’m willing to bet most of you haven’t heard of him.

Johnson, like Sandburg, like William Carlos Williams, wrote Modernist verse while remaining in America. Like William Butler Yeats, his career was long enough that he wrote poems that sounded like the 19th Century before transitioning to a 20th Century voice. Here’s a difference: Fenton Johnson was Afro-American.

OK, let me drop a term here: Identity Politics. I was recently reading a thoughtful blog post on Carl Sandburg compared to Post-Modernist poetry, when the author remarked that Sandburg was able to write in a time preceding Identity Politics. I don’t know enough about Left Write & Centaur’s full thought on Identity Politics, but the implication was that Identity Politics, characterized as the idea that we are silos of individual experience based on membership in social and ethnic groups, who then by implication need to be treated and considered primarily by that identity, is a bad thing.

I agree, that’s a bad thing for the most part. I also believe it’s often a real thing.

The first half: the separation, at least to some degree, of individual experience, is so self-evident I don’t feel I need to argue it. Poetry and literature is to a large part a demonstration of the things that we find unique in individual voices—yes, along with things we can find in common in our lived lives—but if our take on experience wasn’t varied, literature would soon become dull and repetitive (at least to me). Even for those things that we find in common as we read or listen, how would we know without literature or other arts letting us share this?

If we feel that separation is a bad thing, then art is where we go to heal that. The arts are simply a name we give to that sharing of experience.

The second part, that this separation can be handled and considered with bins of people labeled with ethnic origin, sexual orientation, gender, age, class, and so forth, this is where it gets real. We cannot wish away with imagination the ways the world labels and files its temporary inhabitants.

Should I care that Fenton Johnson is an Afro-American poet? Should I mention it? Does mentioning it imply some kind of special pleading? As I present a smattering of his development as a poet, will his work become “Well, it’s a Black thing”—a separation surrendered to? 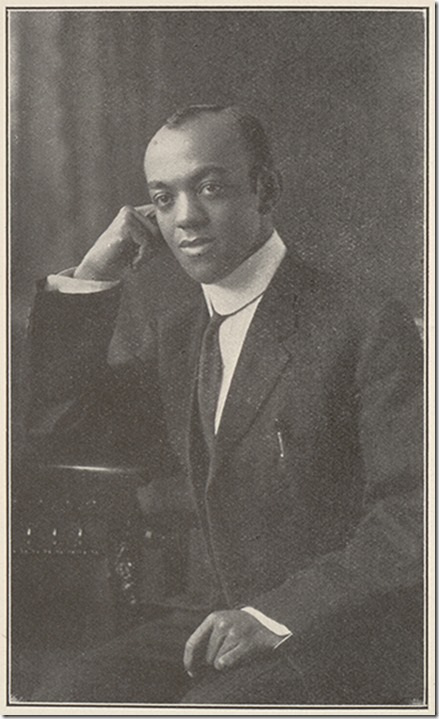 The younger Fenton Johnson. I’m unable to find any later portraits of him.

However we dream our ideal world to come, I know that Fenton Johnson had to deal in the real world of 1918 Chicago, just as he would in 1968 or 2018 Chicago, with his ethnic skin color label on a daily basis. That label doesn’t peel off. No doubt, many he encountered imaginatively filled out that label with a long list of contents, but instead, let’s look from inside Fenton Johnson out at the world.

Will it be the same and different as Frost, Tzara, Sandburg, Rossetti, Tagore, Yeats, and Dickinson? Yes.

Early Fenton Johnson poems often start from a religious theme. This one, “God Is In the All Time”  portrays things from a universalist perspective. To hear my performance, use the player below.