A holiday for it, so this is due. 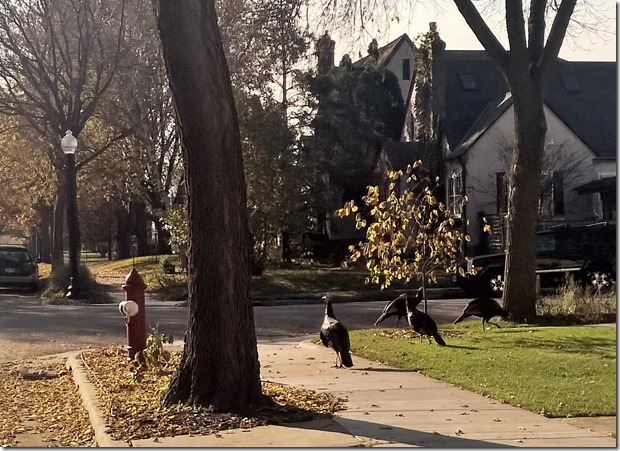 Have you changed out your summer flamingos for autumn yard turkeys yet?

“The Parlando Project,” my 2015 dream to present over a hundred audio pieces combining various words (mostly poetry) with various music, has now reached 155 officially published pieces. For those who’ve taken some of your attention and spent it listening to me present my take on the words of others, primary thanks is due to you. Despite the amount and variety of material I present here, I respect that your attention is precious. Thank you!

Thanks even to the unintended. The strange movements of technology and trade have allowed highly flexible musical instruments to become available at low prices. Most of what I use to make this did not exist one hundred years ago, and in the past few decades, the cost of these instruments, software and recording technology has declined into broad affordability.

Similarly, the Internet, so easy to dismiss for its mundane temptations, has made the availability of artistic materials “ubiquitous everywhere” that tautologies are sold.

Both of these things, the music technology and the Internet, are so enabling of creative work that it seems almost sinful to me to not apply my human imagination to them. But, as with many things, avoiding one sin leads to the commission of others. So, thanks also to my family for the forbearance that has allowed this project to get the amount of time and attention it asks for.

Thanks to Dave Moore, who lets me take a break from presenting my voice uninterrupted , and whose words are presented in some of the most listened-to pieces presented here.

Thanks to the Modernists of  100 to 150 years ago, who showed us fresh ways to use language, and shared their complicated hearts, heart’s beats, and apprehending eyes. Thanks also to their foresight to publish their work before 1924, so that we’re free to demonstrate to the still living what they did. Alas, the leading sadness in this project for me has been the large number of works by no longer living writers whose work you and I cannot speak publicly, because our copyright laws forbid it.

No new audio piece today, instead, here’s one of the first officially released pieces of the Parlando Project, words adapted from Dave Moore. I view it as being about the people left even farther behind than the signed artists of famous paintings. It’s called “Netherlands.”

I’ll let it be a reminder that there is a whole lot of material available here now, so using the Search… box or just click-wandering through the Archives months on the right will allow you to listen to more of the variety that Dave and I do.

Subscribing to the blog either through the “Follow” button near the top, or on the WordPress Reader, will let you know about new posts as they occur, or if you just want an easy way to get the new audio pieces for listening to them off-line, you can do that by subscribing to the “Parlando – Where Music and Words Meet”  podcast on  iTunes, Google Play Music, Player.FM, Stitcher, or wherever you get podcasts. The “Parlando – Where Music and Words Meet”   podcast is free of course. [note: I’d previously mentioned using the little orange RSS buttons to subscribe to the blog, and for those who have an RSS-aware app they will  still work, but the Follow button I’ve just added today makes this easier for most.]

Here’s the player to listen to “Netherlands”