Robert Frost is every bit the master of word music as Yeats and Millay. What makes Frost stand out is that he was every bit the thoroughgoing early 20th Century modernist as any of his free-verse contemporaries, while retaining an ease with accentual syllabic meter.

Here’s an example of Frost handling a subject just as a free-verse Imagist would. His aims, his presentation, hold to the Imagists’ principles. He deals with the thing directly (as we shall see, two things, but still…), and there are no tacked-on metaphors, no stock comparisons, no extraneous “poetic” language. Context is shown, but not explained. He loosens and varies his meter, so the poem sings and never seems to be a shackled march. At 40 lines, it’s a bit longer than Yeats’ poem considering “The Wild Swans at Coole,”  but Frost’s extra detail is even more specific and concrete than Yeats, though both begin their poem with the poet walking in a rural wetland. Yeats slough is a well-known place to him, conditioned with 19 previous visits. Frost is far enough into his swamp to not know exactly where he is, and so experiences what he sees with a first-time immediacy. Yeats’ slough then contains tradition, Frosts’ the more Modernist “Make it new!” place.

Though presented as one simple rural scene and story, “The Wood-Pile”  is more at two poems, though each part speaks to the other. As Frost’s tale starts, we are in the midst of one of his characteristic journeys, just as we are in other famous Frost poems. There’s a need for decision (“Turn back” or “go on farther”) and his choice, also made in other Frost poems, is to go on regardless of whatever doubts brought the question. If he’s lost in the dark by a wood on a snowy evening, keep going. If you come to a fork in the road, pick one and go on. If you’re walking in a swamp in winter and your foot is sometimes falling through the frozen crust, well, keep going “and we shall see.”

And so, here he sees his bird. No Keatsian nightingale, not Millay’s elusive flying swans with their awkward dangling legs and cries, nor Yeats’ majestic 59 swans, but a small bird. This bird becomes a mirror to the poet. Frost’s bird too must make choices in direction, and the poet, sensibly, thinks the bird’s guided by fear. “Keep something between little me and the big lummox trodding through the winter swamp,” he humansplains. And there’s a bit of humor at human’s expense as the poet muses that the bird, like humans with their self-importance, may think that the only reason for Frost to be out in the swamp is to go after the little bird. 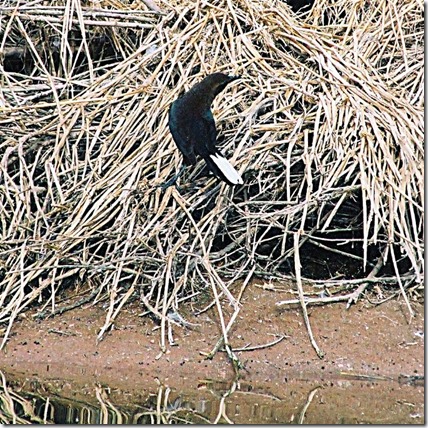 But, we don’t know why Frost is out in the frozen swamp explicitly. The only reason he’s given, or will give, is the Imagist poets’ reason: “and we shall see.”

The bird leads Frost to the second thing the poem wants to present: an abandoned fire-wood cache. Here Frost zooms in close. Every detail of the cut wood and the once neatly stacked and propped wood-pile is stated. Frost turns forensic, like some New England Sherlock Holmes: this pile has been abandoned for years. Mature vines have grown through it. 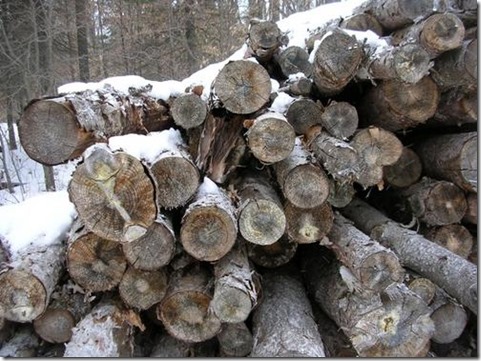 “The slow smokeless burning of decay”

Here is another context left unsaid. Why would someone abandon a purposeful wood-pile in a swamp? Frost leaves it for us to be detective and to solve the mystery. This isn’t some lot of fire-wood left temporarily to be gathered later in the day, care has been taken to stack and prop it.

The only thing I can think: someone once built a shack (now completely disappeared) on the swamp land. Frost muses, sardonically, that only someone so busy with “fresh tasks” could abandon such effort in cutting and stacking. Does he mean to say, “only a fool would be so industrious to cut and stack this wood and yet not notice he was building his shack on a swamp that would not support a homestead?”

Now, the small bird with his “little fears” and oh-so-human misapprehensions of reality—and now, the steadfast Frost of miles to keep going, even if you may be lost, are set in contrast to this choice. Your fears may lie to you—but so will your optimism.

I once heard an astringent biological statement that the length of our lives can be reduced to a slow-burning chemical reaction. Frost’s last line here is a sad and beautiful analog to that truth.

Turn back or go farther? Go on, and we shall hear my performance of Robert Frost’s “The Wood-Pile”  with my original music. Just use the player below.