My teenager asked me what I’m doing, overhearing me test-shouting the text of today’s piece Percy Bysshe Shelley’s “England 1819.”  Here’s a link to that text if you want to follow along.

“Shelley, the perfect English Romantic Poet, might have been the most radical poet of his time. In matters of sex, religion, politics, aesthetics and philosophy he was explicitly in opposition, and he was chased out of England for it. But still he was capable of being driven to a new level of outrage by events.”

“The ruined statue in the desert guy?”

“Yeah, that’s him. And some readers forget that as beautiful a poem as “Ozymandias”  is, that there’s real anger behind it—but you can’t miss the anger in this one.”

So, once more I’ll write today about the process of translation. Not from some other language to English, but from perfectly fine English and a past you may not know, to our time. “England 1819”  is 201 years old, and some superficial particularities could make it seem a little antique. It wasn’t so when it was written—and it just so happens that the rhymes of history may make some other specifics in the poem ring out to a reader or listener today.

What was it that set Shelley’s anger to a new heat point? In August 1819 a large meeting was planned by reformers in Manchester England. The organizers seemed to take care that it be a powerful but peaceful demonstration. Chief among the subjects of the event: the granting to ordinary people the ability to vote.* On the appointed day, tens of thousands turned out, including whole families. Many were dressed in their “Sunday best” to hear speakers in St. Peter’s field, an open space in Manchester.

I’ll summarize the brutal details of what happened. Given that it’s 1819 there are no photographs, no bystander cell-cam video: one has to read and use imagination to picture it. Mounted police were sent to arrest the speakers and organizers on a temporary stage in the midst of the large field while the event was happening. Their horses were slowed and tangled in the crowd (described as so dense, that the hat brims of the attendees touched one another). This led to additional mounted militia and eventually regular soldiers that had been held in reserve to be sent against the crowd. Sabers were used as the horsemen struck out at those surrounding them, and of course the horses themselves were trampling on those who fell or were in the way. In some ways it seems miraculous that “only” eleven were killed. Hundreds were injured: men, women, children. The organizers were arrested, convicted, and jailed. 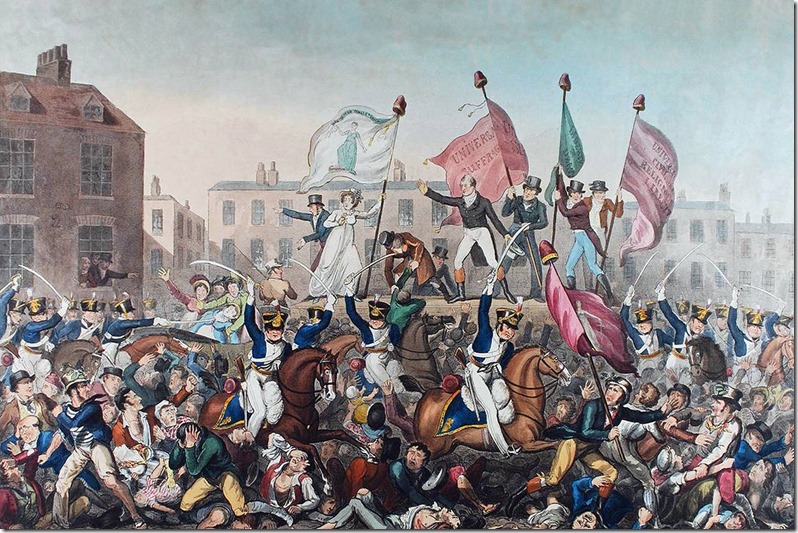 Wikipedia says the banner the woman on the left is holding that day would say “Let us die like men and not be sold as slaves.”

One of those who was injured, and who died a few days afterward from his wounds, was a veteran of the Battle of Waterloo, the famous British victory of four years earlier. With bitter irony this event was called “The Peterloo Massacre”

It took a few weeks for the news of this outrage to reach Shelley who was in Italy. That September he wrote today’s sonnet, along with a longer work “The Mask of Anarchy”  and a third poem in a song form. Despite that he was already a self-exile abroad, none of them were published during his lifetime. There was a reason for that: merely publishing an account of The Peterloo Massacre was considered sedition and libel. He asked his friends to not publish them, for there was a real risk of imprisonment for them to do so. The poems were circulated informally, and finally published over a decade later after Shelley had died.

“England 1819”  then has some specifics. The stabbed in line 7, the army in line 8, and the sword in line 9 aren’t only metaphors—they are, albeit second-hand, reportage. Adjusted for the speed of communication in Shelley’s time, they are roughly as immediate as a blog post, just in the form of a sonnet.

What about the possible correspondences of history/rhyme I mentioned? I could write how in some way that the charges laid out against the 1819 English government power structure and the insidious way they used their power could be compared to my country in 2020. I almost wrote just such a section—but anyone who remains in my audience can likely do that for themselves. I personally found some of them as bitterly ironic as the decision to call the 1819 event Peterloo. You may think otherwise. Feel free to do your own translation today. As to prophetic Shelley’s concluding “glorious Phantom,” the Phantom that may emerge from the graves created and filled by those that then recognize they are dying themselves: what tempest will that day bring? A cleansing, nourishing rain, applauded in the leaves of trees, or a hurricane?

The player gadget to hear my performance of Percy Bysshe Shelley’s “England 1819”  is below.

*For over half-a-century in my life, voting is something that would seem uncontroversial—at least since the heroes of the Civil Rights movement, some of whom died to make that mundane. Indeed, how many radicals have I met who invoke the saying that if voting could really change anything, they’d make it illegal. Now I hear that statement backwards. If there are current efforts trying to impede voting, reduce it, and denigrate it—there must be powerful people afraid of some change it could bring.