OK, let’s reveal where the words from the last post, Poetry in Translation,  came from and what I know about their context—but stick around, as this is going to relate back to those 20th Century theories about how poetry works. If you haven’t listened yet read and listened to Poetry in Translation,  this would be a good time to scroll down and do so.

Earlier this month I was making some tea and talking to my son in the kitchen. He asked about what kind of tea I was making. I picked up the box to show him, Tazo Peachy Green tea. I noticed there was something more than an ingredients list and those filled-circle graphs of how much caffeine was stuck inside the individually bagged dried leaves. So, I broke into my Parlando Voice, improvising line break pauses as the early 20th Century Modernists have ingrained in me, and read it to him: 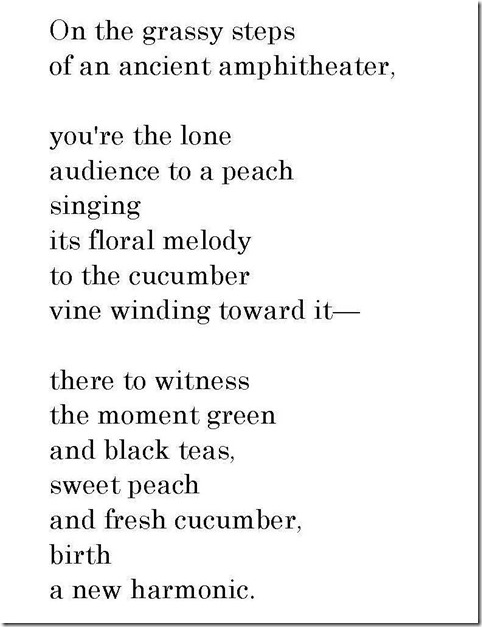 Modernist verse in the supermarket?

My son, now a teenager, is making sure that he’s nobody’s fool. “They must be smoking that tea, not drinking it.”

Modernists a century ago would have liked this. “Found Objects” and use of commercial ready-mades in art and Dada japes were ingrained in Modernism during its avant garde phase. I’d have fit right in at the Cabaret Voltaire in 1916 if I was to have read this wacky and rapturous advertising copy from the tea box while Hugo Ball played piano. 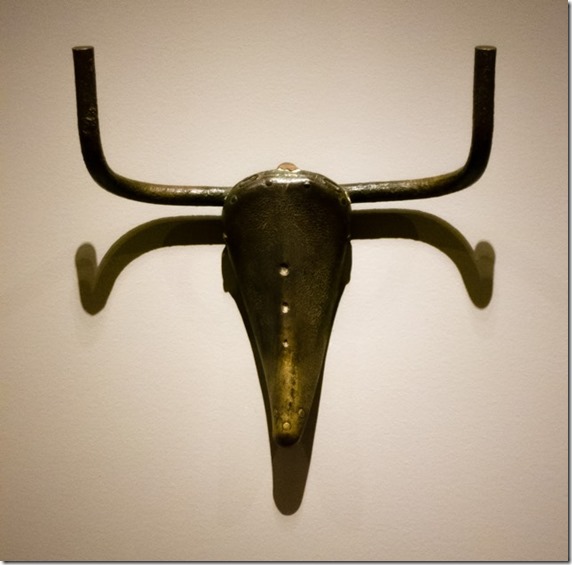 Some will see a Picasso sculpture, others will wonder if a bicyclist won’t be able to ride home

But as Modernism moved to the universities, and I. A. Richards’ and John Crowe Ransom’s “New Criticism” solution to the problem of unreliable interpretation became predominate by mid-century, things would change.

Simplifying wildly, the New Criticism suggested that the reader, not just poets and writers, needed to get under the hood and figure out what made poetry run. Inside every poem was the ideal poem, an expression of complex ideas or states of being placed there by it’s writer. The poems surface, though it may have some interest itself, was only the wrapper surrounding this more sublime poem. This bridged over the revolutions in poetic language, by making less important changes in the way poetry spoke, such as the widespread use of rhyme and free verse. John Donne, John Keats, Gerard Manley Hopkins, T. S. Eliot, Wallace Stevens—the different music of the words made no difference, the rich images portraying important thoughts could be studied side-by-side.

Imagery became poetry, more or less (yes, meter and sound were still attended to, but they dropped in importance). The original Modernists, including the Imagists, sought to kill off centuries of ingrained and tired imagery that had become merely decorative, and replace it with more integral and concrete images, palpable things. But just as when one finally cleans out a closet, time passing will clutter it again. If images contain the soul of poetry, and if deep reading is the best and proper way to encounter a poem, then complex and hermetic images will offer more of the poetic experience.

There’d been something of a cult of great poetry before, often based on important subject matter or the extent of readership, but as the New Criticism ascended to orthodoxy, the ideal of great poetry became stronger and used new criteria. Poems with densely jammed complex imagery requiring close reading and educational training to comprehend were great. Poems that didn’t do this were highly suspect—and likely harmful, in that they did not reinforce this new critical understanding of the soul of poetry.

As I said last time, this is how I was taught to understand poetry in the midcentury.

How can we return to the box of tea with its peach singing to the cucumber of its deathless desire? The midcentury New Critics presumed the supremacy of the poem and the poet’s intent. Later in the 20th Century new literary theorists arose, and the subjective experience of the reader became the place where the poem existed. The poem means what you think it means, which may be different from what another reader thinks it means. Meanings extracted from even the merest of texts could still be complex and valid. The intent of the author is not important, they could well be mistaken.

Now our singing peach isn’t a joke at the expense of exalted literature, it’s an expression of the woo of consumer culture signifying exotic essence through the appropriation of an ancient amphitheater dramatizing barely sublimated vegetable desires. Or it may be something a tired copywriter churned out on Friday afternoon before leaving work and picking up takeout on the way home to feed the kids.

As I said, I’m simplifying, but for the mid-century New Critics the poem existed objectively deep inside the poem where the poet put it. For the late 20th Century Deconstructionists and their contemporaries, the poem existed subjectively in its readers experience of it and the structures around that.

Coming up, is there a reconciliation between those two views? How will the 21st Century view what poetry is and where the poem lives? Will the cucumber and the peach find a meaningful relationship before they are dried and bagged?

Don’t worry if you’re missing the usual music and words meeting up here, we’ll return to that soon enough too. I promise variety, not predictability. To tide you over, here’s Dave Moore and the LYL Band running through his song, set in the late 19th Century, called “The Green Fairy.”