Today we’re going to have our first Parlando Project double-header, two pieces whose words and music were written by Dave Moore back in the 1979-1982 era and both of which appeared on the Lose Your Lunch Band’s only official release, the cassette-only Driving the Porcelain Bus  in 1980*.

The LYL Band and Porcelain Bus  were not entirely political, but the elements of political protest and social commentary were a big part of it. Some of this was based around the election of Ronald Reagan as US President in late 1980 which at the time seemed to be the culmination of a long conservative struggle dating back to the early ‘50s.**  You could say it was like today’s post-Trump election era, and one could point to similarities, although the pendant in me could list considerable differences too. I’ll just let that rough likeness stand to simplify the history for our younger readers. It’s close enough for rock’n’roll.

Dave also points out that his spouse and her relatives at the time were politically interested, and discussions in their circle often included political analysis and issues. I’d add, knowing Dave from a decade before that, that the same could be said about him. Let’s just say that around 1980 it wouldn’t be strange for political dialectics to be part of a casual conversation in South Minneapolis, again, just as today.

But here’s something interesting I noted as I rethought those years, the local music scene really didn’t reflect that directly. I recall folk-singer Larry Long, a man who has sought to continue the legacy of Pete Seeger, as being around the cities during this era, but at least as far as recordings he comes later. John Trudell an activist and singer was based out of the region later in his career, but in the early 80s his musical expression was just beginning, and he was living in California then.

Of course, artists portraying the world and how people relate to it cannot help but reflect political and social connotations in their work, and to that degree that any of the biggest bands to eventually emerge out of the Twin Cities indie scene were political, it was largely that.***  Those bands had something to say about life: what they opposed, what they preferred. An argument can be made on both artistic and commercially-distributed subversion levels for that. But the songs Dave was writing then were sometimes upfront about their political stance. In those songs, subtext, which was also there, was what was beneath the politics, not the other way around. 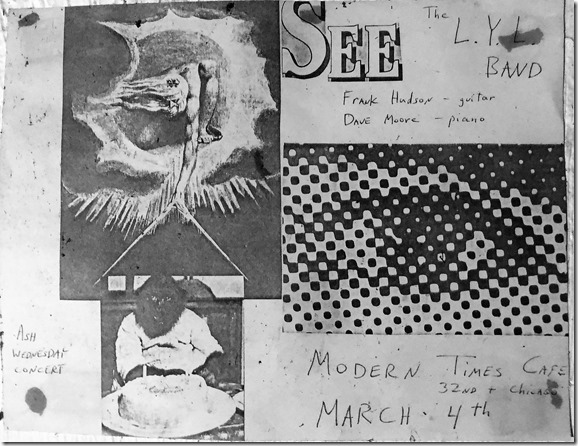 Traveling to a telephone pole of the past, we see a Dave Moore Dada poster for an early ‘80s show

So, let’s step out of the history and into the songs.

Here’s “Scrap”  a companion song to “The Night Inspector”   which you’ve already heard here, inspired by Dave’s work in a machine shop in this era. There was a good live version sung by Dave on Porcelain Bus,  but I don’t have access to a digital copy of it right now, so in its place here’s a later solo acoustic guitar version where I sing it.

And here is an actual cut from the Porcelain Bus,  engineered by Colin Mansfield, just after he was helping Husker Du get underway, a song asking the rhetorical question “What’s Wrong with That?”

If you’re asking yourself, where’s the poetry and various musical settings that you’ve seen here before, know that I plan only about one more history-of-a-band post before returning to our regularly scheduled programing. If, on the other hand, you wonder how this all turned out, the next post will be about that.

And, of course, footnotes, but we reject the hierarchy of superscript numbers for asterixis!

*I’ve just located a few digital scans I made years back of the even then moldering materials form this era, and they show the the Twin City Reader reviewed Porcelain Bus (see footnote below) in their issue that covered the upcoming week interval of January 7th to the 13th 1981. This would mean we recorded it in late 1980 and probably released it before the turn of the year.

**for a detailed history of this conservative effort, I recommend Before the Storm  by Rick Perlstein. For me a lot of what he covers was current events, but for most present-day Americans, it’s history. His two follow-up books are good too, but why not start at the beginning?

***Two exceptions I can note, even if neither are the best-known songs in their respective catalogs: Paul Westerberg’s “Androgynous”  from the 1984 Replacements LP Let It Be,  a heart-felt yet casual sounding and appropriately ambiguous song about busting gender roles, and then Prince’s arch “Ronnie Talk to Russia”  from 1981’s Controversy,  where Prince sounds like the LYL Band would sound if they had Prince’s skills, work-ethic and recording studio (or at least a drummer and bass player).   OK, the new date for Porcelain Bus  means that theoretically Prince could  have heard Dave’s Farisa drenched sound before he used a similar punky combo organ sound on “Ronnie Talk to Russia.” File this under “improbable.”

OK, that last part is irony for you English majors, but Porcelain Bus  was reviewed and got a cover blurb on the local alternative weekly in January 1981, along with Prince protégé’s The Time’s LP. The blurb said “The Time Ain’t No Lose Your Lunch Band,” a statement that I think we can all agree on. The review said we might become a cult band. If you’ve read this far, you’re our last chance as cult adherents. You don’t have to shave your head, sell tracts, move to a compound in the country, or worship Dave as a semi-divine incarnation—unless you think it’ll really help. I believe Dave would rather be worshiped as an Andy Devine incarnation anyway.