Here’s an audio piece that begins in the midst of a common life event: when a son leaves home to go off on his own independence. While this leave-taking could be for a job, or for military or other service, in the modern world, it might well be for college.

Other than its late summertime setting, and the odd moment when the son in this story is thinking of something he’s read in a book as much as what his father is saying as he leaves, there’s nothing in it that indicates the child is leaving for school. Perhaps the son (or the reader) at the start thinks that such a leave-taking will be the story of “One Summer Morning, Which Isn’t,”  but eventually things open to a broader story.

Many who read an earlier version of this were puzzled by the title. “Why isn’t it,  that, one summer morning?” they ask. I once revised the title to answer the puzzlement, but today’s version instead revises the text of the piece to try to better convey what I wanted to get at under its original title. Even that first morning in the opening is seen from two very different perspectives, and as the story expands I try to show that leaving-takings are, strangely, always present, they are not only a moment or a single day. Am I successful in that effort? I’m not sure. It’s gone through some revisions over six years, and by now I’m not even sure it’s a poem, or if it isn’t more of a compressed short story. Well, the new draft is done, and it’s ready for you to hear it performed. 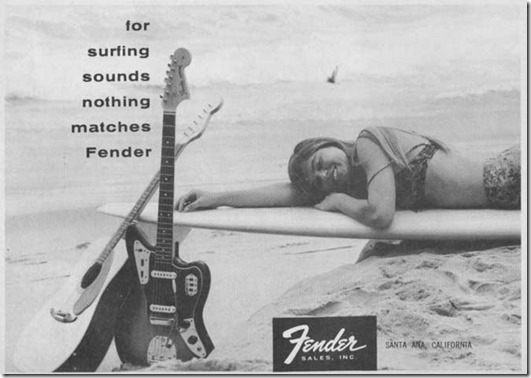 Listen! Gidget, Listen! You hear the grating roar
Of pebbles which the waves draw back, and fling
At their return, up the high strand,
Begin, and cease, and then again begin,
With tremulous cadence slow, and bring
The eternal note of sadness in.
– Matthew “Hodaddy” Arnold

Today’s music is fairly spare: electric guitar, bass, and drums. Yes, that bass line, close but not identical, is meant to remind you of another piece of music, back before Steely Dan. The electric guitar is an inexpensive version of the Fender Jaguar. Just before the 4 minute mark on the track, that weird high wind-chimey sound is something available from its design: notes that can be plucked on the strings between the bridge and the tailpiece. I was reminded of this trick while listening in a car ride with my son when an old Sonic Youth track came on the radio earlier this month.

To hear “One Summer Morning, Which Isn’t,”  use the player below.