Here’s a short piece using a poem by a person who started out as a poet but who spent the greater part of her life working for her country, India’s, independence: Sarojini Naidu.

Sarojini Naidu, like Edna St. Vincent Millay around the same time in the U. S., impressed people as a capable poet while still a teenager. Her talents lead to her being sent abroad to England for college, and eventually she connected with the Rhymer’s Club, the turn of the century London organization that was the last stop in the 19th Century for some of the poets who would launch the poetry of the 20th century.

Today’s piece, “The Poet to Death”  was first published in England as part of Naidu’s initial collection of poetry The Golden Threshold  in 1905. Fluent in several languages, the pieces in The Golden Threshold  are in Naidu’s own English. Some accounts say that the young Sarojini was modest about her poetry at the time, worried that her work was less-substantial because it is lyrical and song-like; and retroactively English-language Modernism did discount that sort of poetic gift. So, while her poetic work is still remembered in her homeland, where Wikipedia says she’s called the “Nightingale of India,” Sarojini Naidu will be a new name to most of our reader/listeners.

During the WWI years Naidu transferred her focus from poetry to working for Indian independence, a cause in which she became a principal, alongside Gandhi and the other independence leaders.

Did the world loose a poet for India to gain its independence? Perhaps. I do not know enough to say. In her English poetry, I can see the influence of the earlier 19th Century English romantics, but her language is less extravagant. She can remind me at times of Christina Rossetti (readers here will know I consider that a good thing), and “The Poet to Death”  is a concise version of a trope Keats used as well.

Today’s music employs a polyrhythmic blues. Perhaps I was subconsciously moved by the “till I am satisfied” line in Naidu’s poem to think of Muddy Waters and his “I can’t be satisfied,” though what I ended up playing has some elements of Skip James’ guitar style too. At a conscious level, I was working on this while thinking of poet Donald Hall, having read a review of his new collection of essays coming out this month, and then hearing later in the same day that he had died at age 89. In his last couple of decades, Hall has often written of what continues until it ends in the course of aging. 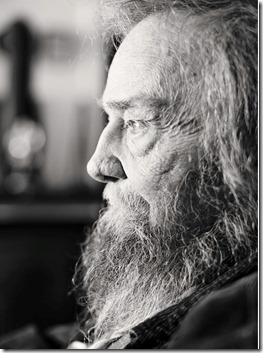 Donald Hall. His book of essays “A Carnival of Losses: Notes Nearing Ninety” drops in July.

For some reason the version of the text I worked with did not have Naidu’s first stanza, which specifically speaks, as a younger poet, for death to stay his hand. In the remaining two stanzas, the age of the speaker is less determined, and so the situation is joined whether it is a young poet or old. The blossoms are always there a short time, at any age.

To hear my performance of Sarojini Naidu’s “The Poet to Death,”  use the player below.

When it was announced that Bob Dylan had been awarded the Nobel Prize for Literature there was a substantial reaction asking if songs could be literature—no, that’s not right, I’m mischaracterizing much of the reaction I read as if it was an honest inquiry into this question. No, the reaction I read was more of a conclusion that songs could not be literature, and so this Nobel award to Bob Dylan was a break with tradition, a loosening of standards.

This is complex subject, one I’ll probably return to, as I have much to say on this; but missed in the hoopla and questioning was this fact:  Bob Dylan was the second singer/songwriter to win the Nobel Prize for Literature.

In 1913 Rabindranath Tagore was awarded the Nobel Prize, the committee citing:

“Because of his profoundly sensitive, fresh and beautiful verse, by which, with consummate skill, he has made his poetic thought, expressed in his own English words, a part of the literature of the West”.

In 1913 when the prize was given, Tagore had only one such work they could be talking about: “Gitanjali,”  a 1912 collection of his song lyrics that Tagore had translated himself from Bengali into English prose poems.

The title page of the original English edition

Tagore is a fascinating man and artist, with achievements in so many fields that you might think I’m making him up. He wrote every kind of literature, started a university, seriously pursued modern painting, and gave Gandhi the title “Mahatma.” But he was no dabbler at songwriting, having written over 2000 songs. He’s even the only composer to score a hat trick for national anthems, having written the national anthems of India, Bangladesh and Siri Lanka.  His songs are so pervasive in Bengali culture that his thousands of songs have become their own genre.

“Let me lay it on you Mohandas: it means ‘Great Soul.”  Also, there’s this girl in Detroit who I’m going to call the Queen of Soul.”

Poet William Butler Yeats wrote enviously in his introduction to Tagore’s “Gitanjali”  of the power of songs:

“These verses will not lie in little well-printed books upon ladies’ tables, who turn the pages with indolent hands that they may sigh over a life without meaning, which is yet all they can know of life, or be carried by students at the university to be laid aside when the work of life begins, but, as the generations pass, travelers will hum them on the highway and men rowing upon the rivers.”

This spring as I read Tagore’s “Gitanjali,”  I hoped to find there on the page what is promised in Yeats’ introduction and what would normally be guaranteed by such acclaim. I failed at this. I couldn’t find it. The English of the prose translations seemed so archaic, the expression stilted, the voice vague. From accounts I’ve now read, this seems to be an acknowledged problem; and it appears that, for whatever reasons, Tagore purposely framed his translated work in an incomplete way. In the longer term, I will seek some of the newer translations. In the short term, I stood back and remembered something.

Song. These are songs.

Not only are they missing their music, but songs, like plays, are works for individual voices and talents to embody. Their creators are not claiming the real, complete thing exists on the page, that they are performing them mutely with ink on the white page. No, they expect, demand, that someone step in them, surmise their meaning, fill the blank white space with emotions, and speak them.

All art is like this really. Songs admit it. Songwriters generously say: I need you to fill these things, your humanity is better than any of my approximations.

So, today’s episode is the second of my attempts to bring something to a piece from Tagore’s “Gitanjali”  using his original prose translations, as that’s all I have for now.  With the last post here, “Light,”  I tried to meet Bengali music partway, but this time I’m staying firmly in the Western side, maybe even a bit on the Country and Western side. As I read this piece on the page I heard it as sounding like one of those weird Lee Hazelwood arrangements from a few decades ago, but since I was producing this myself, I had to sing the Nancy Sinatra part as well.

If you wonder about the floating light ceremony mentioned in the song I call “Maiden with a Lamp,”  it may be this one.

To hear me perform my vaguely C&W version of “Maiden with a Lamp,” use the player below.