I’m posting a bit late in the day, but it’s International Women’s Day, and so today’s audio piece uses as a text a poem by a very international woman, Lola Ridge. Ridge’s poetry is perhaps best known for a fierce commitment to social justice and the situation of the poor in early 20th century America; but she was born in Ireland, left with her parents for New Zealand as a child, emigrated from there to Australia to attend college, and then to America, eventually New York City, where she mixed with most of the political and artistic radicals of the early Modernist era, including on the arts side: Marianne Moore, Edna St. Vincent Millay, Hart Crane, and William Carlos Williams and the rest of the circle around the NYC Modernist magazine The Others.  Over at the Midwestern anchor of Modernist American poetry, it’s editor/founder Harriet Monroe was said to have called Ridge a genius, and she won awards and some favorable reviews in the years between the two World Wars.

Late in the 1930’s she apparently fell from the scene politically and artistically, and when she died in 1941 she was as poor as the people she wrote about, and then seemingly the subject of a rapid and rather complete forgetting for the rest of the 20th century.

Luckily our 21st century has become interested in reassessing the women who were on the scene a century ago along with the male Modernists, and there’s now a revival in considering her work.

Unlike some of Ridge’s poetry, today’s piece is not formally Modernist. It’s not only a sonnet, it attempts to present a passionate if conventional poetic argument regarding the abstract ideal of artistic beauty. Taken by itself it’s more Percy Bysshe Shelley than William Carlos Williams, but if we look just a little beyond its surface we can be reminded that Shelley was a thoroughgoing political and social radical as well as a Romantic era poet. Here’s a link to the text of Ridge’s “Sonnet to Beauty,”   from a blog that does a great job of presenting sonnets and similar shorter poems, FourteenLines.blog.

Ridge’s poem starts by worshiping beauty almost as an awed acolyte unable to face the godhead. But in the midst of the poem, something strange starts to manifest itself: a buzzard (an ugly, carrion-eating bird) appears gussied up by “The wizardry of light” to appear “All but lovely as the swan.” I read this as Ridge saying that artists and society can fail, can deceive, can fake beauty.

A musical metaphor follows this that says despite the diversity of artistic endeavor — including false beauties or injustice like unto our buzzard — that beyond the dissonance and the harmonic stress of this dialectic, that the chords can resolve. The poem ends avowing that true beauty can still chime through ugliness, falsehood, and strife.

Beyond sonnets, I will now make a turn in this post before giving you a chance to hear my performance of Ridge’s poem. Let me quickly summarize the event I attended this past Sunday remembering Irish-American poet Ethna McKiernan. There may be more than coincidence that Lola Ridge started this off. 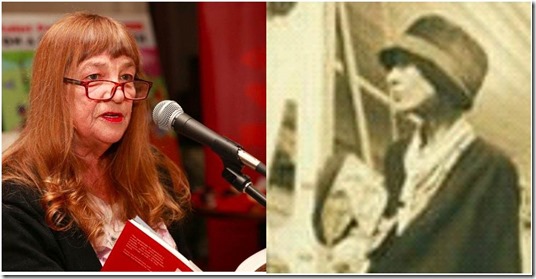 Ethna McKiernan reading, with lipstick, and Lola Ridge, I’m not sure.

Minnesota weather and continued Covid-19 concerns might have conspired to reduce attendance, as the side streets were still full of sloppy snow from Saturday’s snowfall.*  I arrived early and helped the bookstore staff setup chairs. They seemed to be expecting maybe a couple of dozen, which may be par for a Twin Cities local-writer poetry reading, but both the event organizer and myself the bystander suspected we’d need to maximize the amount of chairs the space could hold. I think we were able to get nearly 40 folding chairs into the designated space, but as the crowd started to assemble, extra chairs needed to be rounded up and put in the various aisles between the bookstore shelves to handle those that kept coming in, and we had a few standees who fit in where they could.

More than typical bookstore poetry readings, I suspect most of the crowd knew Ethna for a long time. And that may have given a boost to the eight poets who read poems of Ethna’s, a smattering of their own, and gave short thoughts about her as a writer and a person. So less a usual public reading where some poets might be nervously trying to consider how they would come off presenting their work to an audience which might not know it, and more like an experienced and informal poetry group of long-time colleagues.

Several of the readers were members of other periodically-meeting writer’s groups that included Ethna, like unto the Lake Street Writer’s group that Dave Moore, Kevin FitzPatrick, Ethna, and I were decades-long members of. I’m sure that if Kevin had lived, he would have been a valued part of this event, as Ethna often credited Kevin as an influence on her writing — but he died a few weeks ahead of Ethna. I tried to make myself useful by playing stagehand and raising and lowering the mic stand for the variety of readers.

Many of the readers spoke of Ethna’s work with homeless outreach, and read some of her poems that dealt with that work, something that echoes today’s poet Ridge. Though the audience was entirely masked, a few noted that Ethna was a stickler for always putting on lipstick when out in public. For all anyone knew, what with our Covid era masks, we all were wearing lipstick! Who could see — but I believe all of us were remembering Ethna. 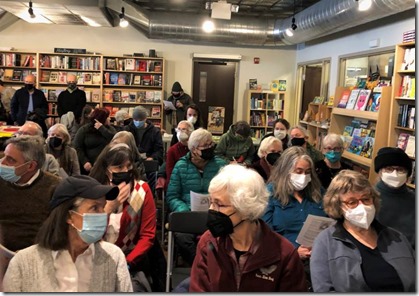 Covid-era ambiguity: “Lipstick? We were supposed to wear lipstick?” A portion of the crowd at the “Remembering Ethna” event last Sunday.

So, as I speak of a woman who promoted culture, wrote beautiful poetry, and was committed to helping the economically desperate, I will now leave you with a piece using the words of another woman who a century before us did the same. You can hear Lola Ridge’s “Sonnet to Beauty”  with a graphical player below if you see that, or if you don’t, with this highlighted link.

*My friend and participant here in the Parlando Project Dave Moore was unable to attend due to concerns with the street conditions. I’ve attended two other book-launch poetry readings given by Ethna herself, and this Sunday’s was the smallest crowd of the three. Consider though that most of those who knew Ethna are “senior citizens,” and some are frail as well.