Looking for texts to feature here this month, I came upon this odd Robert Frost poem “Bond and Free”  and I could easily see how I could perform it Parlando style. Performance unavoidably involves choices, even if it can precede fuller understanding. Let me talk some about those choices I made and what understanding I’ve come to have about this poem. If you want to have the full text available while I discuss it, it can be found here.

What seemed odd about this poem? Well, I associate Frost with specific and palpable imagery. If one has any sense of the rural landscape of the 20th century, as I do, I can often place myself directly on the stage with the speaker in a Frost poem and examine the set decoration. Critical overviews of Frost’s era will sometimes want to clearly distinguish his work from the Modernists, mistaking the devices of rhyme and meter as the essentials of his work. This ignores that he’s so often working in his early short poems with the same direct observation, avoidance of worn-out tropes, and fresh, lyrically present moments as the Imagists.

This poem with it’s capitalized “Thought” and “Love” is not like that. In some ways it’s like Emily Dickinson in her more philosophical or legalistic abstract mode. To the degree that this poem has a landscape, a stage set, the one on which this poem plays is cosmic.

Frost’s poem begins “Love has earth to which she clings.” Any accustomed Frost reader would expect that garden or farming matters will follow. We first read Love here as implying a plant’s roots, but what follows has a topography viewed from aerial heights. From there the valleys of a hilly country are, as they can practically be in Frost’s time, wall after wall that separates people and their towns from each other. That third word “earth” as the poem progressed could well be capitalized too, for it’ll turn out to be more at the planet Earth, not mere soil. The first stanza ends by introducing Love’s contrasting principle in this poem — Thought, as in Free Thought. Right away we see Thought is flying above it all, in the mode of Icarus or Daedalus.

The poem’s speaker (I’ll call them Frost, for as there’s no sense that Frost is setting up some special other voice from his own) follows Thought as the second stanza views Earth’s earth from above as a landscape with marks of human effort on the ground visible as a printed page. “Nice enough” it seems to have Free Thought thinking, but “Thought has shaken his ankles free.”

It’s now a good time to take note of the poem’s title: “Bond and Free.”   Frost is writing this about 50 years after African-American emancipation. Like Emily Dickinson (who wrote most of her poetry during the Civil War) Frost almost never mentions slavery, the issues of racism, or the widespread theories of racial differences or superiorities in his poetry.*  Leg shackles could be applied to prisoners of course, but like the broken shackles that are hard to view at the feet of the Statue of Liberty, in the American context I think slavery is an intended connotation here. Essays on cultural appropriation could be written from this. Not here, but it’s possible. I could suppose someone could see a BSDM reading. While I know a blog post titled “Robert Frost and Sexual Kink” would be surefire clickbait, I’ll resist. It’s also plausible that he was connecting “bond” in the sense of “marriage bond.” More on this below. 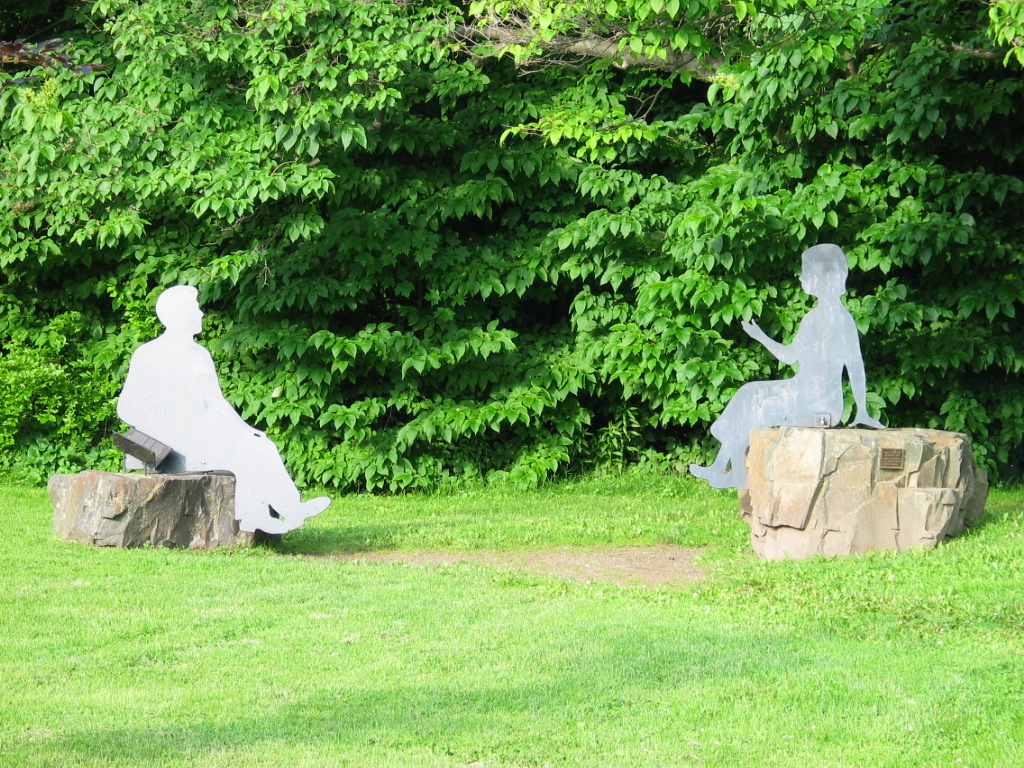 “You read your Emily Dickinson. And I my Robert Frost…” The two great American poets lived in Amherst in different centuries, and this set of statues there commemorates that.

In the third stanza we outdo Bezos, Musk, and Branson as Frost notes with inexpensive poetic efficiency that Free Thought is not bound-in by earthly hills but is capable of interstellar flight. This stanza’s final lines, an Icarian or Luciferian plummet, find that at the end of the limits of the dreams of a night Thought invariably returns to an “earthly room.” As my footnote below notes, Frost is fairly sure of the fallen nature of humanity.

The final stanza is, to my reading, an ambiguous judgement. If humanity is fallen, Frost too is unable to judge the competition and contrast of Love and Free Thought. Thought’s freedom and range, even if temporary, even if illusionary, has a pull and value. And “some” (Frost externalized this opinion and doesn’t say they are right or wrong) say Love (even if it’s bondage and constrains one) can have a fuller possession by nature of its grounded stasis.

The poem’s final couplet retains this duality, Free Thought has partial experiences of multitudinous beauties in a wonderous universe, but these beauties are “fused” to other stars. To choose other than temporary dreams, just replaces New Hampshire with Sirius.

I said at the start performance means choices. I made an audacious choice. In Frost’s poem he consistently gendered Love as female and Thought as male. Furthermore, I’ve read second-hand references that in an earlier draft he chose to make both Love and Thought female, an unusual choice that he abandoned. I made my choice for my own reasons, to help the performer, myself. I think that choice makes it a stronger piece for myself and for my audience.

The reports of Frost’s abandoned choice would make for a different poem. English writing in Frost’s time usually used male pronouns for universals and abstracts, so that original choice of female pronouns must have been intentional. His choice for skyward Free Thought as male, and earthy and fecund Love as female is archetypal, and I in turn made a conscious decision to reject that. I did this because I feared that too many listeners might grasp this poem as a conflict of male sexual freedom vs. the clingy women. Intentionally or subconsciously, this may have been in Frost’s mind, and even so then this is Frost’s version of the complicated love poem that the female “songbird poets” were developing in his time, even if it’s more abstract in describing the bond and free of desire.**  I just preferred the duality of the poem ungendered, and I think modern audiences are ready to receive that version.

The player to hear my performance will appear below for many of you. However, some ways of reading this blog won’t show it, and so here’s a highlighted hyperlink to play it. You will notice that besides the pronouns there are a few other textural differences, some accidental, some chosen to make the language more colloquial***  and easier for a modern listener to grasp on hearing. I don’t know if these changes are for the better, but they were this performer’s choice.  As promised earlier in this month of noisier musics, acoustic 12-string guitar and piano featured this time, but just enough sarod and tambura in the background to add a non-New England air.

*Frost did write one searing poem on racial hatred and violence: “The Vanishing Red,”  which I presented here. A brief search today didn’t return much. I would expect that he held stereotypical views and used ugly racial epithets casually. Like Dickinson, Frost’s silence on this central American issue should be more often considered as a loud silence. In her defense, Dickinson’s stance on human freedom, often expressed in her poetry, can easily be viewed as inspirational by all. Frost is surer of a fallen humanity, but that too can be appreciated by those weighed down by life or oppression.

**That reading would say that Frost was more guarded and indirect in dealing with desire than Millay, Teasdale, and the “songbird poets.”  Thus, the uncharacteristic abstraction of this poem

***One of Frost’s Modernist strengths was to largely remove from his metered and rhyming verse the sense of stilted and too formal poetic diction. My judgement was that this skill deserted Frost several times in this poem. Perhaps abandoning his usual distinct and grounded settings for this more abstract poem also blunted his naturalness of speech.

One thought on “Bond and Free”