Today’s report on the most listened to and liked pieces featured here over the past quarter will show three experiences of the mystery of winter. So, let’s return to our countdown:

4 Twilight Fallen White and Cold  by Joseph Campbell.  I seem to have become something of a promotor of this little-known in the United States Irish-born poet who I still know little about. He published a series of poetry collections before the end of WWI, and then his poetic output dropped off, for reasons I’m not yet clear on, though the politics of his country’s decolonization struggle may have contributed. This piece using his words that a lot of you liked and listened to may be the most mysterious of today’s trio.

Best as I can figure it, this winter nature landscape poem may be an expression of his nation’s detracted state and situation, particularly in the invocation of ancient earthworks (raths) and burial mounds — but I cannot plumb the entirety of the refraining line of “wounds of Eliom/weep on me” that I feature in my setting of Campbell’s poem. Eliom is a plural word for gods, sometimes used for polytheistic gods, sometimes used for the singular monotheistic diety, and as it may be here, used for angels. If that’s so, then the starry constellations, the winged vampires, the curlew birds, the floating mists, the carrying sound of the ocean are all the Eliom, the angels in this changed winter nighttime vision.

To hear my setting of Campbell’s poem, you can use this highlighted hyperlink which may open a new window with a player, or in many cases, you’ll see a player gadget below to directly play it. 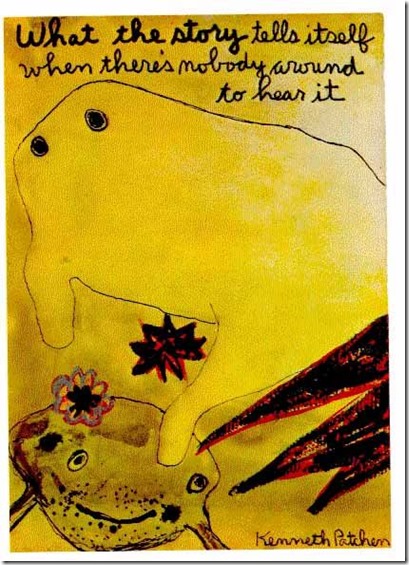 It’s been too long since I’ve said this: thank you for coming to read or listen here.  It’s become harder for me to respond to comments or properly promote this project, but I appreciate so much those who come here, listen, and let others know what the Parlando Project does.

3 The Snow is Deep on the Ground  by Kenneth Patchen.  Lawrence Ferlinghetti, whose words we met earlier in this countdown, would sometimes remind folks that he wasn’t really part of the Beat Generation, even if he was associated with others who might have been so thought. Patchen is a similar case, or perhaps more so, in that his poetry career started in the 1930s,

As with many of the best Patchen poems, even the political ones, this is a love poem, delicately poised between the enchantment of love and the world that allows the shattering of it. If one can fully absorb the illumination of this poem, as with some of the best of Patchen, you would cry tears of joy and sadness at the same time.

You can hear my performance of Patchen’s “The Snow is Deep on the Ground”  with this highlighted hyperlink, or if you see it, with a player gadget below.

2 The Sky is low  by Emily Dickinson.  Some years back in this project I once compared Emily Dickinson to one of those unexploded, yet potential, bombs that are still unearthed in Britain or Europe from the World Wars. Originally she was found as the creator of curious little poems from an eccentric woman, then as a prescient 20th century Imagist, and now in our deconstructed age we can stare at one of her tiny poems, and like one trying to follow the decent of a single flake of snow in a flurry, fall as far as one can follow.

You can read, or listen to my performance, of “The Sky is low”  and find a whimsical nursery rhyme, and find enough enjoyment in that — but let it stick in your memory or repeated ear and a little dialog about predestination, first causes and fate is discernible. To listen, use this hyperlink, or you may see a player gadget to directly play it below.