What do we see, what do we learn, what possibly do we gain here in the upper parts of the northern hemisphere from so much nighttime at the beginning of a cold and snowy winter?

Some might say we learn endurance, a sense of obligation besides the dark and ice to carry on. Or a concentration, winter solstice as the fasting of light. But night is a filter, a frame, offering another way of perceiving. So, I went looking for poems this month that might allow you or I to look at darkness and see differently. One of the strongest and strangest poems I found was this one by a little-known Irish poet named Joseph Campbell.*

I’m trying to gather more info on Campbell. He was born in colonial Ireland in 1879 and died 1944 in a now independent Ireland. Most of his available poetry was published before WWI. He was imprisoned in the events surrounding the Irish Civil War of the last Twenties** (he was aligned with the losing side) and afterward he lived for a couple of decades in the United States. Shortly before his death he returned to Ireland and died there. I’ve read one of his book-length collections of poetry and parts of two others, all of which predate Irish Independence and the Civil War. I find him a striking poet worthy of more interest. Most of his poetry is brief, rhymed lyrical poems, using short metrical lines, such as today’s selection. One collection, Irishry,  contains incisive small character sketches of Irish life at the turn of the 20th century. Another, The Gilly of Christ,  has elements of Christian mysticism. Inherent in many of the poems seems to be a speaker who has spent time hiking about the country, and in this regard, Campbell reminds me at times of Edward Thomas with his attention to the book of nature and the landscape. While he likes rural and sometimes peculiar words, his language is clean and modern without the taint of worn-out 19th century leftovers.

There are also a handful of poems I’ve read in the collections so far that are very much in the style of the early Imagists, and this is striking because they may date to around the same time as their initial ground-breaking experiments. I so far know of no direct connection between Campbell and the largely London-based pioneering Imagists, but like his Irish contemporaries Yeats*** and Joyce, Campbell seems to be an early Modernist voice regardless of his use of rhyme and meter for most of his poetry. 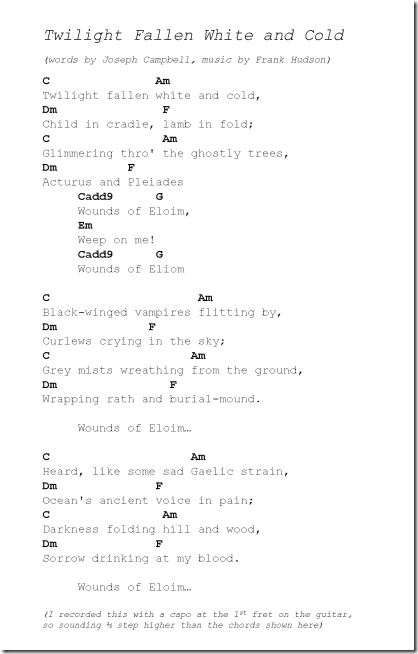 Today’s Winter Solstice relatable piece “Twilight Fallen White and Cold”  mixes his modes a bit to produce an interesting effect. It’s on one layer a jaunty nature poem, almost nursery rhyme simple. This seems an easy effect to achieve, but particular to moderns, it’s not. Subtly mixed in with the “child in cradle, lamb in fold” comfortable lines are misty undercurrents. Well, yes, those trees are a bit ghostly in fading light and cold mist. Yes, birds are on the wing, but also “Black-winged vampires.” What? No, there are no vampire bats in Ireland.****  And in the last line of the second stanza we meet “rath and burial mounds,” the former a word that has an Irish meaning that an modern American reader might slide over. No, the burial mounds aren’t explicitly angry, a “rath” is the remains of an earthen-walled stronghold dating back to Celtic chieftains. The poem final stanza intensifies that hold and call from the indigenous past. Though Campbell is depicting an Irish landscape, these rounded-over and landscape-worn earthworks bring to mind the areas of North America in my native Midwest where indigenous people built similar structures.

But the most mysterious part is repeated as a refrain to make sure we don’t miss it: “Wounds of Eloim/Weep on me!”

The darkness of coming night may be mysterious, but this is more so. I don’t know exactly what Campbell is getting at there, other than the effect of mystification assuredly delivered. Eloim, which I believe in a variation of “Elohim,” is word that will not become less mysterious if one researches it. It appears to be a Semetic language family word for gods. In the Bible the word appears to have taken on several meanings. The Abrahamic Semites are famously monotheists, and they will use the word to refer to the multiple gods of the other tribes—but even though the word is plural, they will use it to refer to their own, singular god, or to the ambiguous angels that are not human but are also not plural gods. At some point, I believe post-Biblical times, this association with angels has led the word to be used at times as synonym for heaven.

Does that help us understand what Campbell meant to ring out multiple times in his poem? Not exactly. I gather some sense of a lost past, of a suppressed culture, is being invoked, but the mysticism never reduces itself to a “this stands for that, it’s just a code to be broken” level. That may increase its power, and it certainly increases the strangeness of this poem.

Returning to my original question, what might the darkness, our winter-come overwhelming night portion teach us? The example of this poem says that I shouldn’t answer that question quickly and simply—but that I should ask it.

A player gadget to hear my performance of Joseph Campbell’s “Twilight Fallen White and Cold”  will often appear below. If you don’t see it, this highlighted hyperlink will play it too.

*As I have to say whenever I mention Campbell to anyone: no, not the American Hero With A Thousand Faces  and “Follow your bliss” Joseph Campbell. This is another guy. The Irish Joseph Campbell also used a Gaelic name, Seosamh Mac Cathmhaoil which would have given him a more secure doing-business-as cultural brand, and near the end of his life a pen-name of Ultach.

**Until this year I was entirely ignorant of the events of the Irish Civil War and now only know the summary story as reflected in things like this Wikipedia entry. I am, so far, unacquainted with Campbell’s political beliefs and actions.

***Like Yeats, Campbell seems to have been a committed cultural nationalist, seeking to use the arts as a way to uplift his country’s prestige and as a foundation for independence from colonial status. Like Yeats he also seems to have been involved with theater and as a song lyricist. One tidbit I found, which may be related to the mysterious element in today’s poem, is that he may have been the source responsible for a broadside folk ballad “Reynardine,”  being performed in a version by several British Isle folk-revivalists later in the 20th century as a tale of a “ware-fox” rather than in its original guise as tale of a bandit. Here’s two of my favorites versions, one by the incomparable Bert Jansch, and an unaccompanied one by the equally special Anne Briggs.

****Maybe St. Patrick and Van Helsing teamed up to take care of that?