I’m of an age when thoughts of death could be excused as more a present issue than a youthful goth affectation. Covid-19, that hit dirge of the summer that would play at every party were there every parties, amplifies that. But the gothic was similarly close at hand in the 19th century when untreatable disease and violence were more common. We still associate poetry with funerals—though I worry too that we can compartmentalize it there—but in the 19th century this was even more so. Real and imagined elegies were all the rage for poets at any level of talent and fame. From extensive demographic research I believe it may be true that just as high a percentage of 19th century people died as nowadays;* but it did seem the opportunistic occasion for poetic mourning was more extensive then.

Now Mark Twain, a satirist, loved subverting the expected, and so in the course of his novel Huckleberry Finn’s catalog of expected human behavior and good taste overwhelming a more rational ethic, he stopped to parody such memorial verse with this tale of romantic death that failed to be, well, romantic enough. In the novel this poem is written by Emmeline Grangerford, who is described as a young poet who rapidly cranked out memorial verse faster than any undertaker or supple lyric muse could keep up.

In today’s audio piece I give some of the story of Emmeline’s poetic endeavor from the novel, and then sing as a folk song of the sadful death of Mr. Bots using for lyrics the example poem of Grangerford’s Twain has given us. The full text of the poem is here. 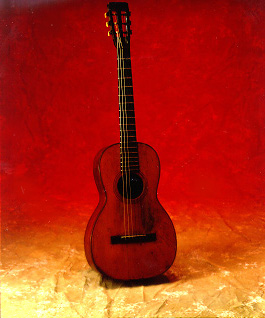 What is said to be Mark Twain’s guitar still exists and has been acquired by a collector. Small size guitars like this were normal for the 19th century guitar market in America. (photo by Bianca Soros)

Today’s music is just acoustic guitar. Although I originally intended a more elaborate arrangement, I think just guitar suits it well. As I came to the decision for practical and aesthetic reasons, I was reminded that Mark Twain himself was a guitarist.** Just before leaving for the West Coast where he would make a name for himself as a writer, he bought himself a used Martin guitar.*** He says he played it for men and women in the newly founded boom towns, and on shipboard as he sailed hither and yon. Twain’s account says he sang along with the guitar, but I haven’t found any accounts of what his repertoire was. It could well have been a songster’s mix of popular tunes of the day and what we now call “folk music” and I could purpose he just might have slipped in a few originals. Since one can’t tell how Twain would have performed “Stephen Dowling Bots”  as a mournful song, I claim my attempt as “close enough for folk music.”

You can hear my reading of how Emmeline Grangerford’s poetry is introduced by Twain and the song made from her memorial poem with the player gadget below.

*I can present the statistical charts and tables for this startling claim when it’s ready for peer-review. A counterclaim is based on the data that many people in our 21st century are not, in fact, dead at this time. (emphasis mine)

**One of Twain’s sisters was a music teacher who taught piano and guitar. Both instruments were often thought of as women’s instruments in that era, to be played in middle-class home parlors for do-it-yourself culture and entertainment. The supposition that Twain’s sister taught Twain how to shred on his axe follows that tidbit.

***The famous American guitar making company was founded by a German immigrant Charles Frederick Martin in 1833 (a year that’s still featured on a Martin guitar’s label.)  The Twain guitar pictured here is said to be from 1835, which would make it a “birth year guitar” for Mark Twain. Some collectors today seek out vintage guitars that are coincidental with their birth year, but I doubt that was a thing in Twain’s time. Further clouding the picture, the design of this guitar (particularly the headstock) looks more like the guitars Martin made later in the 19th century, and not those made just after the company’s American start.