Here’s one of Robert Frost’s well-loved poems that has managed to penetrate into popular consciousness in a way that few modern poems have. “Nothing Gold Can Stay”  is therefore found anew inside of S. E. Hinton’s novel The Outsiders  and the resulting movie and Stevie Wonder song, or via the 21st century song by First Aid Kit.

Often when I present Robert Frost poems here, I ask your indulgence to point out that what is often drawn from them doesn’t represent what Frost seems to be trying to impart. “The Road Not Taken”  isn’t about the critical importance of taking the “road less traveled,” but about the irrelevance of choice and dangers of “analysis paralysis.” “Stopping by Woods on a Snowy Evening”  isn’t about tarrying by a beautiful winter scene instead of getting on with life’s duty, but about someone lost in rural darkness. Even this month’s “Acquainted with the Night” —while, yes, frankly dealing with despair—is about living with depression rather than dying from it.

But “Nothing Gold Can Stay”  does seem to be saying what most everyone draws from it—and so, unlike these other Frost poems, it’s loved for exactly what it is saying: that certain kinds of beauty and states of grace are transitory; and then by implicated extension, that to hold them inside a memory or a memorable poem is our consolation. So, what’s left for me to say then?

Well, maybe there’s this element: that a catch phrase drawn from it, “Stay Gold,” is not in Frost’s poem, and his poem indicates that will not happen even if wished; but I’m willing—as was Carl Sandburg in our last post “Monotone” —to cut humanity a little slack here. Sandburg in his middle stanza of “Monotone”  tells the same story as Frost’s more famous poem, though more of us remember Frost’s expression of the idea, which may be testament of the power of Frost’s rhyme in memorability. Sandburg’s point however, the one I subscribe to, is that there’s something to be admired that is left after the loss of moments of perfection or passion in both memory and the continuing changed moments.

One other thing I’ll admit I hadn’t noticed until preparing this piece this month: “Nothing Gold Can Stay”  is a spring poem about tree blossoms as much as it’s an autumn poem about falling leaves: “Early leaf’s a flower.” The tree blossoms on my bike rides this spring are, it seems to me, more numerous, fragrant, and beautiful. Is this a side-effect of the closed in spring of our current epidemic? I think too, not only of Sandburg’s “Monotone,”  but of Meng Haoran’s “Spring Morning,”  and my own “Plum Tree Blossoms on 40th Street.”

Early one morning this month, I rode my bike down 40th street to the now closed schoolhouse, the route I rode a few years back with my child in “Plum Tree Blossoms on 40th Street.” I remembered one fine tree full of blossoms there a block before a bicycle bridge that crosses the then busy freeway, and the flowers’ smell that day that told me the tree was louder to my nose than the traffic under the bridge. This morning, this month, I was surprised to see not one, but a whole row of trees, all in bloom. 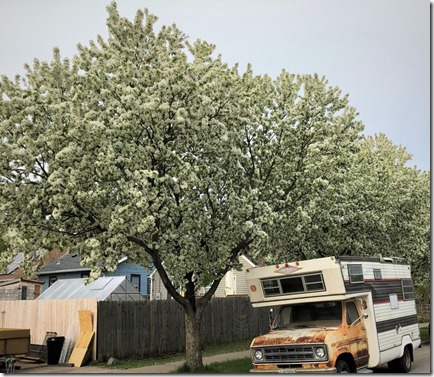 Blossoms revisited. The other side of the street from the rusty camper was a tattered car with blankets blocking all it’s window glass, evidence that some of the cardboard sign beggars at the nearby freeway entrance may have slept there the previous night.

A few words on the music before I ask you to listen to my performance of Frost’s “Nothing Gold Can Stay.”  The music I created for this is based on my appreciation of South Asian music, a style that I refer to sometimes here. This is a complex musical tradition of which I have little knowledge of other than as a listener, yet like some others I’ve been drawn to its tactics from the first time I heard it.* Oddly, the top line musical instrument I used for this is a uniquely American one: the mountain dulcimer, a small, fretted, plucked string instrument.** And the percussion instruments here do not include the tabla drum sets used in South Asian music because I don’t have access to them, but are instead approximated with a mix of “Latin Percussion” drums and rhythm instruments, like congas, bongos, and small rattles, bells, and such. I do have good tampura and harmonium virtual instruments that I can play with my MIDI guitar and little plastic keyboard, so I did use those traditional South Asian sounds.

I like how this turned out. Why this music for Frost’s “Nothing Gold Can Stay?”  There’s no harmonic progression to it. I don’t notate this sort of composition with chord symbols the way I might a rock music piece. If I did it would be sort of Dsus4, D, D5, Dsus2—so really it’s just about the drone center of D and how one steps out and back to the D note in a rhythmic/melodic dance. Nothing gold can stay, but the D drone reminds us musically that change is return, that return is change.

Here’s the player gadget to hear the performance.

*Like many Americans it was Ravi Shankar LPs on the World Pacific label, reinforced by his appearance in rock concert films like Monterey Pop and Woodstock, and other audacious appreciators who (like me) started to drop in things they drew from these performances into their own work.

In the early 70s in New York I worked in an E. R. with an Indian surgeon who would sing melodies acapella while suturing away. Those melodies would keep us going during long nights.

In the Twin Cities area we are lucky to have some South Asian tradition performers, and westerners like Dean Magraw, Marcus Wise, Steve Tibbetts, and Greg Herriges who incorporate this tradition into their playing.

**The mountain dulcimer has a mysterious past. It’s like and then not like a lot of other instruments from around the world. It seems to have been played by rural Appalachian mountain country settlers, often from Celtic backgrounds where harp instruments and drone wind instruments were common, but it’s not a harp. What it is though is an instrument that was relatively easy to make at home without complex tools or fixtures. In quiet times in those night-time hospital E.R.s I would sometimes quickly construct a rough fretless one out of a cast-plaster box and rubber bands.

One thought on “Nothing Gold Can Stay”