Let’s continue our celebration of U. S. National Poetry Month!

If Emily Dickinson and Walt Whitman are the parents of modern American poetry, then one poet is most nearly the descendant with an equal inheritance from both: Carl Sandburg.

Sandburg’s poetry has two modes: the tightly compressed Imagist poem and the expansive, iterative, catalogic Whitman-like ode. I find him effective in both styles—and sometimes he mixes both, as in today’s selection. Each line in his “10 Definitions of Poetry”  is its own compressed poem, but taken together in a list they express different aspects of poetry. 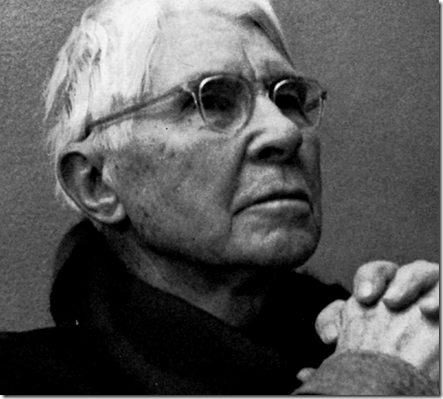 The forgotten American Modernist. Sandburg! thou shouldst be living at this hour!

I’m something of an advocate for Sandburg here, as I feel he’s fallen out of favor during my lifetime and now is more than due to be re-evaluated. The major knocks against him in the later part of the 20th century were that he wasn’t complex and subtle enough, that his poetry didn’t dig deep enough in to the hard-to-grasp philosophic questions at the core of meaning and human existence, and to a secondary degree that his poetry wasn’t, well, poetic, that it was neither lyrically beautiful nor painstakingly constructed.

I won’t lay out a complicated case for Sandburg on those two issues here today, but on the first issue I’ll say that Sandburg’s Socialist and working-class outlook leads him to address universal issues of the human condition, from top to bottom of our current social organization; while other poets, ones with an avowed aesthetic focus or a calling for self-contained spiritual insight look at only part of the situation. Even those that don’t share Sandburg’s politics can benefit from his insights. On the charge of Sandburg not being a poetic craftsman, I’ll say that while I don’t know much yet about his working methods, I can look closely at some of Sandburg’s shorter works and find well-chosen small things—and whether they were intuitively there in his vision or created by exhaustive study and revision, I find that less important than their existence.

I’m also sorry to say that Sandburg’s poetry can sometimes be—as reflected in some of his definitions in this list—fun, funny, entertaining. You’ll just have to overlook that.

I took my musical inspiration today from Sandburg’s first definition: “Poetry is a projection across silence of cadences arranged to break that silence with definite intentions of echoes, syllables, wave lengths.” My guitar part runs through some modulation effects and an echo/delay; and underneath, working with my electric bass-line, a wobbly Mellotron* waves along. Hear this with the player gadget below, check back soon for more combinations of various words with original music—and, oh yes, please let others know what we’re doing here at the Parlando Project.

*No, I don’t have an actual funky tape strip Mellotron. Thankfully the tapes have been converted into digital samples and can be played with an inexpensive MIDI keyboard or controller.