As I’ve done most quarters, I like to look at the most played and liked pieces during the past season and report back here. Usually a few of the results surprise me, they aren’t always my favorite pieces or even the ones that I think came off best.

I do this in classic countdown fashion, so we start off with number ten and move in the next few days up to the number one. The audio pieces for the Parlando Project can be consumed a number of ways. Some listen to them here using the audio gadget on the blog, but others listen by subscribing to us through any of the leading podcast services. The audio pieces are the same, but the blog allows me to write about the pieces in a much richer manner than I can with any of the leading podcast services. However, if you, or someone you know might be interested in just the music and words, this is a handy way to get them on your phone or other handheld. So, if you just want the tuneage, search for Parlando – Where Music and Words Meet on iTunes, Spotify, Google Play Music, or any of the other podcast services. You should find our audio pieces in their podcast sections.

On to the countdown…

Coming in at number Ten is one of the two pieces from May that gathered enough likes and listens to make it, despite having a shorter time frame to do it in, “Letters to Dead Imagists and A Pact.”  I often like to look at who influences the writers we feature here, and this piece lets me do that with short poems from two poets: Carl Sandburg and Ezra Pound. Sandburg tips his hat first to Emily Dickinson and Stephen Crane, while Pound, rather grudgingly, acknowledges Walt Whitman. Despite being contemporaries with similar lifespans, despite both having connections to the American Midwest, despite Sandburg’s use of the early 20th Century Modernist/Imagist poetic practices as promoted by Pound; these are two very different men outside of their work with pen and typewriter. Interestingly, it’s Sandburg’s work that has an obvious Whitman influence though it’s Pound that points to him. Though Pound thought Whitman too careless in his craft, he’s the one that chose to give Whitman his due here.

Speaking of Imagists, at number Nine, we have the poet Hilda Doolittle and her “The Pool.”  Pound acted as a high-handed branding consultant would with  her, reading her poetry and then scrawling at the bottom of her manuscript her new brand: “H. D. Imagiste.” Doolittle writing henceforth as H. D. went on to a long career, and I’ve read that Hilda herself didn’t care much for the connotations of her family name anyway. Maybe that marketing advice helped, but early H. D. work like “The Pool” is  striking short poetry mixing concreteness and mystery, so maybe it was an inspired choice to use the short and less defined H. D. for a pen name.

Musically, I really like what I came up for this one too. 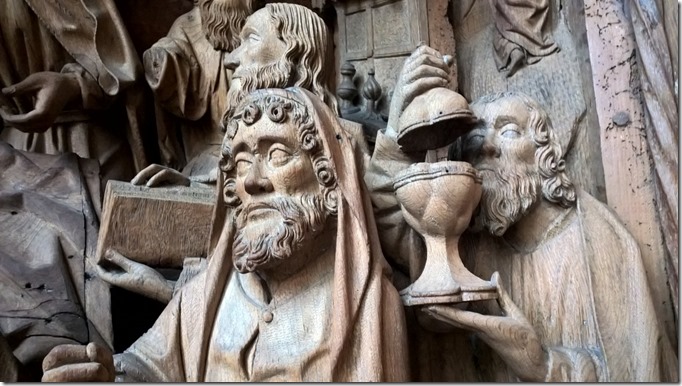 At number Eight, let’s welcome to our stage the man who Pound said in our number-ten-holding poem “broke the new wood” in free verse poetry: Walt Whitman. What an odd image for Pound to use! In looking at why he might have chosen that image I found out that Pound’s family established itself in Wisconsin by building a thriving sawmill there, so it may be that Pound is liking Whitman to a pioneering lumberman, bold in seizing the ground and resources he found there, while Pound seems to say he pictures himself more as a William Morris style furniture craftsman or perhaps even as a skilled woodcarver. 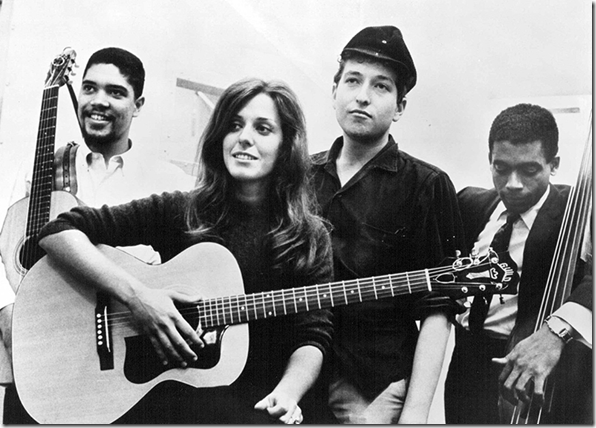 Straining at connections, because I love this photo so much: folksinger Carolyn Hester once recorded Whitman’s “O’ Captain,” but the 3 session men behind her appeared on many great folk records of the 60s: guitarist, Bruce Langhorne; bass player Bill Lee, father of filmmaker Spike Lee, and in the middle. the harmonica player with the shayna punim cheeks is known to trivia buffs as the father of Jakob Dylan, the leader of the 90’s band The Wallflowers.

Whitman’s “When Lilacs Last in the Dooryard Bloom’d”  is one of a pair of elegies Whitman wrote responding to the assassination of President Abraham Lincoln, and the one I prefer to the other: “O Captain! My Captain!”  regardless of the feelings some have for that other Whitman poem’s use in the movie Dead Poets Society.  Furthermore, Whitman’s lilacs here are one of the reasons that T. S. Eliot’s landmark of High Modernism “The Wasteland”  begins in spring with that very flower blooming “out of the dead land.”

We’ll have numbers Seven, Six and Five coming back here soon. So don’t touch that dial—wait, this is the Internet, you can touch the dial any time you want—but do check back, as we continue our countdown of the most listened to and liked audio pieces combining various words  with original music here over the past season.