There’s a long tradition of “the answer record” in pop music, where another artist responds to a hit record with an opposing viewpoint. Christopher Marlowe’s 1593 “The Passionate Shepherd to His Love”  (our last post) received a similar diss from Sir Walter Raleigh with his “The Nymph’s Reply to the Shepherd,”  which is today’s. Who will folk-rock the mic harder? Feel free to re-listen to Marlowe’s inning before considering Raleigh’s reply, Marlowe’s player is just below:

As I mentioned last time, these poems with their shepherds and lovers, called Pastorals, were proudly artificial, and set in a completely stylized and relaxed world of affection and sufficiency. You may find any desire to dwell in this unreal world strange and old-fashioned, but perhaps we imagine now another kind of locus amoenus/“pleasant place” to dream of going to, to escape the world. 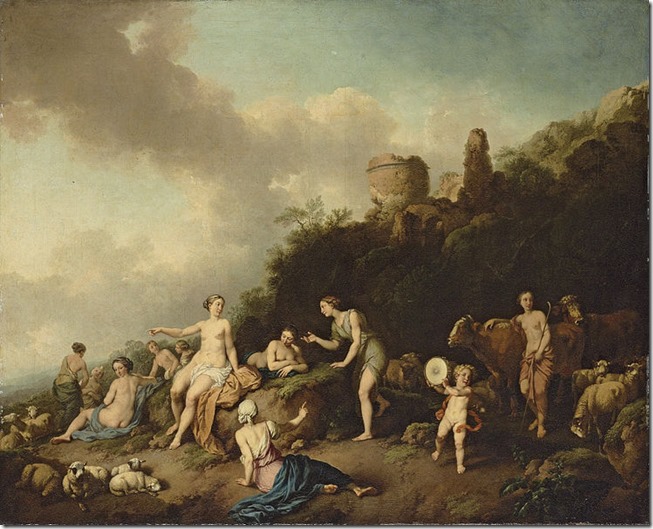 “Then he was all about rural handicrafts all of sudden. Was he even interested in me?”

“Well, it’s not like taking care of sheep is that hard. A child with a tambourine can do it!”

Raleigh’s “The Lie”  has already demonstrated here that Raleigh had no patience with romanticism. So, he’s primed to take on “The Passionate Shepherd,”  but he also notices another weakness in Marlowe’s argument: the Shepherd promises pleasures, presumably mutual pleasures to his lover, but he isn’t stopping there. He’s going to demonstrate his commitment by throwing an entire Etsy shop at her: beds of roses, caps, vests and belts made from woven wildflowers, wool dresses and wool lined slippers. And bling! Gold buckles, coral and amber buttons.

So, Raleigh composing the nymph’s reply has three arguments to make. All those hand-made crafts on offer? Doesn’t move me Shep. Outdoor animal husbandry? Not as romantic as you make it out to be in May, and those wool slippers better be warm if I’m going to be traipsing after some sheep come January. Lastly Shep, you’re all hot and bothered about me now, but just how lasting is all that? I appreciate the offer, but let’s just say I’m keeping the wool lined slippers and you can go try your line on some other nymph?

I’m not even sure what a kirtle is, but I understand cold feet at night

Musically, this is another piece inspired by a 1960s folk-rock sound. I was thinking specifically about the musical style of Fred Neil’s Capitol records as I arranged this. I used a minor key chord progression somewhat related to the major key one I used for “The Passionate Shepherd,” and once again I sung this one. Raleigh, if downbeat, is just as lyrical as Marlowe in his answer. Marlowe has pretty lines like “By shallow rivers to whose falls/Melodious birds sing madrigals,” but Raleigh has “The flowers do fade, and wanton fields/To wayward winter reckoning yields.” So, use the player just below to hear Sir Walter Raleigh’s response in song.