Returning now to our discussion of Modernism, that early 20th Century artistic movement that gave the artistic environment we are still grappling with. While it was a world-wide movement, reacting to world-wide changes in technology and society—for the first time, Americans were at its forefront.

But not all the Americans were residing in America.

Back in 2014, when there was a brief 50-year anniversary flurry of coverage of the Beatles “British Invasion” of the US, I played one of favorite games. So, if we were to think in 2014 of the way things have changed since 1964, what would a person in 1964 be looking back at from the same 50 year interval from their time?

Turns out they could have been looking at not a “British Invasion” of musical groups, the Beatles et al—but an “American Invasion” as Ezra Pound, T.S. Eliot, H.D., Gertrude Stein, Robert Frost, and Ernest Hemmingway all were residing in England or Europe around this time. Pound in particular, was busy making alliances and promoting his vision of Modernism, which he called “Imagist.”

Imagists, at least at the start, put a high value on concision. Pound was just as concise in Imagism’s manifesto, reducing it to three rules:

Direct treatment of the “thing”, whether subjective or objective.

To use absolutely no word that does not contribute to the presentation.

Images of Imagists: Sandburg on the left, Pound on the right. You can say that again.

Not all the Imagists were residing overseas however. Back in the specifically American city of Chicago, Carl Sandburg was to combine these Modernist/Imagist precepts with Socialist politics and activist journalism. He worked so hard at this that he essentially split himself into different people. There was Carl Sandburg the Imagist poet who hung out at the then new Poetry Magazine offices, where the poetry discovered by their European Editor, Pound, was funneled into America. But he was also a journalist working for the legendary Chicago daily press portrayed in “The Front Page”.  At the same time, he was also associating with equally legendary American IWW radicals and anarchists, writing for their publications, sometimes under a pseudonym. Was he hiding his identity, or just saying that the agitator was a different personality?

Visualize that American comic-book secret-identify hero, say Superman. By day the “mild-mannered reporter for a great metropolitan newspaper…” by night fighting for “Truth, Justice, and the American Way…” as a crusading radical Socialist—but wait, there’s something more—he’s not just those two, he’s trying to create Modernist poetry as well. And pay the rent. Which is his true secret identity? 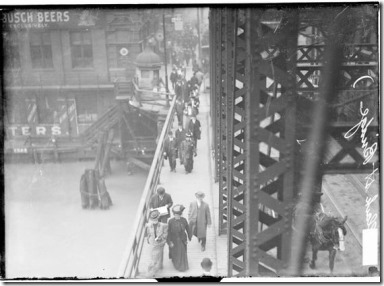 Chicago’s Clark Street Bridge, then and now: “No more dust and wagons.”  Are the voices still unheard?

Today’s audio piece, Carl Sandburg’s “Clark Street Bridge”  is an orthodox Imagist poem by this un-orthodox, tripartite man. The subject “thing” is definite as the downtown Chicago river bridge in its title. Its rhythm is as legato and singing as the absent voices singing at it’s end. It starts with its busy turn-of-the century black’n’white newsreel footage of crammed wagons and walkers, then takes us to the dog-watch night: only three scattered people interrupt the foggy mist and the brightest stars above the urban river. In this mist and shadows, reporter Sandburg takes off his double-breasted suit, but then, stay-at-home Imagist poet Sandburg takes off also his poets’ tights and doublet, and now, naked as a radical above the dark Chicago river he hears the “voices of dollars” in the city’s heartless commerce, the “drops of blood” from the men and women who animate it, and the gigantic chorus of the resulting “broken hearts,” as many as all the stars, as heavily present as the mist, and as unheard as either.

As I’ve often found with Sandburg, others have set his poetry to music, but no matter, I press on. My music for “Clark Street Bridge”  started with an un-relenting long-measure typewriter-like drum part which I hoped would stand for hoof and foot beats. I tried to pair the guitar part and the reading of the words, and finally, I laid a legato bass part underneath it all to stand for those voices softer than the stars and mist. To hear it, use the player below.