“The Assyrian came down like the wolf on the fold…” This, written by Byron, is one of the catchiest first lines in a 19th Century filled with catchy lines. It’s so good that I remember reading it in high school many, many years ago—and so good, that ironically I recalled nearly nothing else of the poem, not even its title.

I, like many others since, have informally used that image of a mighty force, that wolfpack, totally overwhelming a weaker force, cast as a fold of sheep. So, even though I did not remember the poem, when I read it again this month I thought that opening line summarized what the poem described. In that first re-reading I had trouble following the poem’s plot entirely, though the poem’s rhythm, rhyme scheme, and irresistible forward motion carried me through it with some appreciation. “OK, big bad Assyrians are going to sweep all before them, destroying everything in their path, including, I guess, that ‘Sennacherib’— must be the name of a city.” The poem’s flow moves relentlessly forward, like those Assyrian horse-drawn chariots I think; and there’s death and its all-quiet-afterward corpses—but no real battle, however one-sided, that the famous first line leads us to expect. Did Byron leave something out? And what’s exactly with that last stanza?

Turns out, I was misreading the poem. It’s also been a long time since I’ve read the Second book of Kings in the Bible, where Byron borrowed his story. Sennacherib isn’t a city, he’s the king of the Assyrians. In the Bible story, the Israelite king, about to be swept away like his kingdom by Sennacherib’s Assyrian army, prays for God to intervene to save the kingdom, and God RSVPs with supernatural force, wiping out that supposedly unstoppable horde from the famous first line. 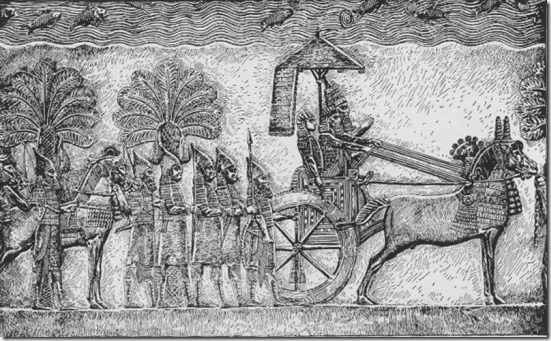 Once I realized that, I could properly appreciate Byron’s middle section, with it’s spooky Angel of Death sensuously breathing in the faces of the Assyrian army as it flies through it faster than any charioteer. And the gloriously grisly image of the dead warhorse whose spume from its last furious race to escape is stretched between its stilled nostrils and the dirt it now lays in.

Yes, Byron races through this story because the mysterious “glance” of God defeating the Assyrian army might be diminished in a mortal’s attempt to describe it, and when Byron jumps to the aftermath, he keeps moving fast, but each detail he chooses to notice tells.

Unexpectedly to me, this wasn’t a story about how the smart money bets, how the unstoppable force is, as we’d better well realize, unstoppable. It’s instead, the story of a miracle.

Besides my initial misunderstanding, I found the poem has another problem in modern performance. Its poetic meter is anapestic, two unaccented beats followed by the strong beat. This is a jaunty rhythm, which whether for natural reasons or from association, sounds to me either like “A Visit from St. Nicolas”  or Dr. Seuss—and neither assists with the mood of this poem! So, I attempted to break up the metrical feet, and read “against” the meter a bit, while keeping the momentum going.

Musically, it’s some guitars mixed with warbling synths, and a keyboard electric-piano bass line this time. To hear the performance of “The Destruction of Sennacherib”  by George Gordon, Lord Byron, come down like a wolf on the fold onto the player gadget below.