As promised, here’s the very next piece Dave and I tracked last July after our take on Bob Dylan’s “Went to See the Gypsy”  which eventually broke out into a full orchestrated arrangement. It’s one of Dave’s songs, his words and music, a piece he wrote a couple of years ago called “E Flat.”

Dave says he wrote it after reading a report that planet Earth’s fundamental vibration was determined to be at the pitch of E♭, though this pitch was at an octave range much lower than human instruments or hearing go. I did a little searching today to see if I could re-find that report, and I’ve come up blank — though the concept of our planet having a frequency has been trotted out, often with a dose of cosmic woo-woo. The most popular Earth frequency I found was “Schumann’s Resonance” discovered in 1952 by a German electro-physicist Winfried Otto Schumann.*  Schumann’s observations were made of electrical wave activity between the earth and the ionosphere, and were calculated to be on a fundamental frequency of 7.83 Hz. What pitch is that? Well, it depends, and if you follow some esoterica, that’s an important depends. Most musical stuff these days is set so that 440 Hz is an A note, but that was not historically the only way the pitch we call A was defined; and there’s a belief that one such past standard, 432 Hz, is better. Some of this belief is buttressed with “hear me out, this is very scientific, an objective fact” talk about powerful natural vibrations that have perfect ratio relations to a 432 Hz A.

As of today, I can’t relocate the report Dave read, but that doesn’t mean his song isn’t close enough for rock’n’roll. When we performed it this summer, I set out a time-keeping drum beat, and while Dave sang I played a free-form guitar track swinging close to the amp speaker for feedback sustain. Some days after the live tracking I fancied up the drum track, added electric bass, and played the electric guitar chordal part that dominates the final track you can hear below. When Dave and I play we decide things very fast, and I didn’t do a great deal of thinking or composing for what I added later either. Working on this song was like painting with wet oil paints.

W. O. Schumann at the chalk-board and Patti Smith looking to run her nails on it.

By the time I was throwing on the last guitar track I was verging on consciously aiming for the sound of the Patti Smith Group’s “Radio Ethiopia,”  the title track to Smith’s second LP. Not a very famous or prestigious record. Why’s that? Here’s the punk-rock-speed history.

A significant group of people (though not top-the-American-charts-sized then, or modern Internet multi-million-follower sized now) had taken Patti Smith’s first album, Horses  to their hearts. I was one of that group. The chanted and declaimed poetry, the open references to rock’n’roll — that record’s sound was balanced between passion, looseness, and intent, unembarrassed in its declaration and performance. I also believe that impact was intensified because it was fronted by a young woman who acted unencumbered by gender roles.**

But that’s the first LP. I spoke above about the second LP, one that got tagged with the “difficult second record” label. “Difficult second record” syndrome is usually explained by a band having had a reasonable period to develop a range of material for their debut album, material that they have confidence in while still retaining a sense of freshness in their own experience of it. The second record now has expectations that have to be dealt with, expectations to either be mostly “the same, but better” or if not that, “different, but every bit as good.” But there’s less time to develop that second record while they tour to exploit the interest from the first.***  What was it they did right to make a splash with the first? Does a band have time to figure that out? What to keep, what to add?

Radio Ethiopia,  the album, kept an element from the tracks that are often less remembered from Horses:  the first record’s more conventional rock songs as opposed to the longer, idiosyncratic spoken word mixed with rock-references tracks — but in place of Horses  longer pieces like “Gloria,” “Birdland,”  and “Land,”  we got a different style on Radio Ethiopia  in songs like “Poppies”  and particularly and problematically on the 10-minute title track. Smith’s vocals were mixed lower in these new long-form songs, at times down to a subliminal level, and the chordal guitar work got denser. Few liked it. Not “few” as in dedicated, knowledgeable fans — “few” as in not-very-many. 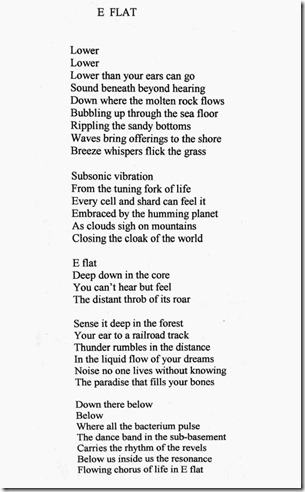 Here’s the lyric sheet Dave was singing from. Yes, the song’s in E♭

Will you like what I did to Dave’s song here then? Who can tell? It sure is musically different than the piece we performed just before it this summer, and the final resulting pieces you can hear here, even more different. I like different. If you don’t care for it, I’ll say that my aesthetic here is like Minnesota weather: don’t like it, or like it, today? It can, and will, be different tomorrow. Some will see a player gadget to play it below, but if you don’t here’s a highlighted hyperlink that will open a new tab window and play it.

*It would be so resonant if he was related to the composer Robert Schumann, but I’ve found no cite claiming that.

**One could, and likely someones have, written a treatise on Patti Smith’s relationship to gender, which is complex. Those hadn’t been written in 1975, which didn’t mean it didn’t have impact then. What some felt, got, resonated at pitch, would be emotions recollected in intellectuality later.