My time and energy is short tonight, so this post will reflect that, but I wanted to present this supple poem by William Butler Yeats written near the end of the 19th century, but, I think, applicable in our American year 2020.

How many of us as couples, as friends, as families this year have felt the need to be support and comfort for them; or in return, needed that from others? A year of shocks, changes, challenges, revelations, of noise and force. Cold deaths, hot fires. This past Tuesday’s national image of that televised, trampled talking over, the faulty assay that volume and audacity can just as well substitute for truth. That absurd equation that one can talk the longest and take the least responsibility. Is that what words are for, is that all  they are for?

I came upon this poem in another blog I read: Stuff Jeff Reads.  There the author figures that in this poem Yeats is using esoteric imagery, drawn from the poet’s well-known attraction to and participation in various hermetic organizations. I think he makes a good point, though some imagery may, without being directly decodable as some secret in-group code, be read by the receptive reader or listener, even if they are a non-adept. The full text of this poem appears in Jeff’s blog that I Iink here in case you want to read along.

Two images, one with physical mass, one auditory are weaved through this short poem. The massive one is the horse and in its plural sense, the Horses of Disaster. In Yeats’ 19th century the horse was still a large part of military force* and one of the largest animals that would be encountered daily in much of his British Isles. Our age may reduce that intimate knowledge. Someone like me, never part of the horsey set, who kept his small purse away from horse racing stakes, and rural in his youth in a tractor and truck sense, can only rely on fairs, events, and exhibitions to feel something of what Yeats’ horses meant to his contemporary reader. To stand, as I have, near a draft horse or to watch horses run at full gallop, and to imagine in my sparser memory that collection of momentum and force, is to feel something Yeats intended to convey.

But there may be accrued in the sparcer memory, that lack of daily familiarity something too. The horse, the Horses of Disaster, are more mysterious, more occult in daily fact than they may have seemed to a reader in 1896. One can often get out of the way of an actual run-away horse—our modern Horses of Disaster, not so much. 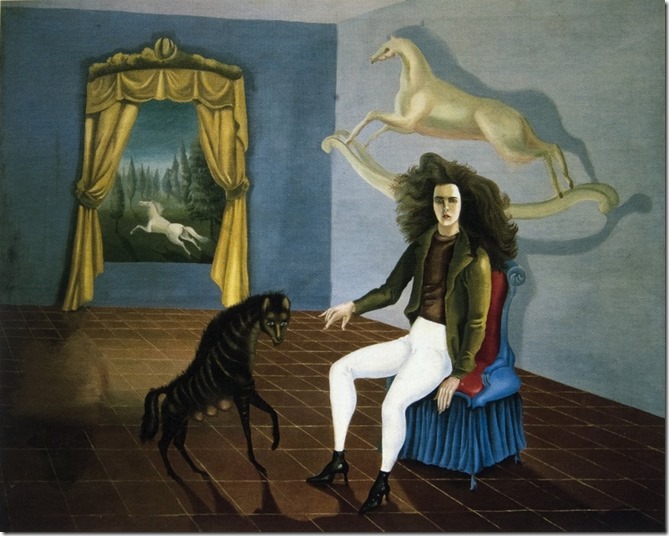 “Vanity of Sleep, Hope, Dream, endless Desire” The picture is “Self Portrait (Inn of the Dawn Horse)” by Leona Carrington, a Surrealist who deserves to be better known.

The other image, the auditory or conceptual one the poem weaves, is tumult—uproar, confusion—by definition, unpredictable, illogical, chaotic, the body and hooves one cannot sidestep easily.

So, I read this poem as a spell—and Yeats artistry is striking regardless of the efficacy of magical beliefs or practices.**  There is after all, the spell we cast with those we love and comfort. Come, the world will carelessly or concertedly hurt you, but I will not.

The player to hear my performance of Yeats’ “He Bids His Beloved Be At Rest”  is below. Wishing you justice and mercy.

*Consider the similar imagery in James Joyce’s “I Hear an Army.”

**I think of a saying I’ve always loved: “If wishes were horses, there’d be a whole lot more road-apples.”