Last post I said that Pablo Neruda’s departed lover was by definition absent by the time we got to the final love poem in his Twenty Love Poems and a Song of Despair.  I’ve now read the entire collection in an English translation, and I’d have to say that the lover is to a large degree absent throughout—not just in the sense that elements of a doomed romance are woven into the whole series, but in the sense that she isn’t really given a living presence.

This last point may be crucial. Without it, this poetic series would be only another example of the syndrome of “The Male Gaze.” If that sort of thing, and the patriarchal power dynamics associated are a point of pain, this series of poems by the eventually Nobel Prize winning poet may not be for you.

Sexuality and its expressions, its inescapable intertwining with the rest of society’s hierarchies and prejudices, is not a simple thing. Twenty Love Poems’  popularity testifies that not everyone in the past 100 years sees it this way or is equally bothered by that element.

“Poem 20”  in the series began by launching one last extravagant image about the love affair as it writes that there can be no more, but as I now turn to the opening of the series, the 19 year old Neruda is going to try numerous audacious images to describe his beloved and their relationship. They’re all going to be one-sided. She never speaks. Her emotions can be sometimes made out if one reads the poems in an Imagist manner (where emotional words are not used, but depicted with external description) but they are not the point of the series which is focused on the male speaker’s suffering, confusion, and dissatisfaction.

I’ve mentioned before that I fear that I may ere in my translations because my prime goal is to make vivid the images I discern in a poem. In Neruda’s “Poem 1,”  I differ from other translations I’ve read of it in that I see some images they have muted or made more abstract and “prettified.” I worried about my tendency here so much that I pulled back from some rawer translations I considered. This may be cowardice on my part—but the most noble explanation I can give is that to make a sure judgement on that level of tone I would need to be a fluent speaker of the source language and more familiar with the entirety of Neruda’s work. 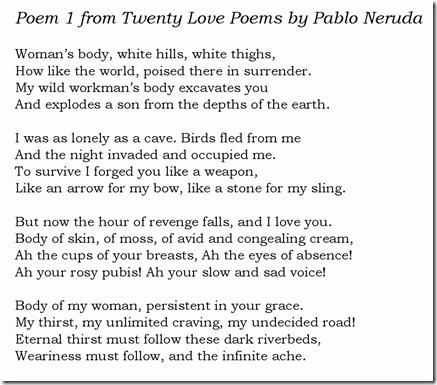 Here’s the translation I mined from Neruda. “It’s much cheaper down in the South American towns where the miners work almost for nothing.”

Here are some brief notes on my experience of “Poem 1”  in making my fresh translation of it from the original Spanish.

The poem opens with an audacious image: the beloved is portrayed as an immense (if inhuman—not even animal, but mineral!) landscape. My reading is that Neruda is making an extended metaphor that erotically he’s engaged in mining his lover’s body. Are there subtexts here (I assume unintentional, but who knows) to foreign corporate exploitation of Chilean resources?

The first quatrain ends with what I read as a brag that lover-man Neruda is so potent that his lover could only conceive a son from his mining operation. See what I warned about? Either Neruda or I—or both of us—is risking risibility here.

In the second quatrain, Neruda recovers. This is flat-out marvelous and mysterious writing. Perhaps it benefits in that Neruda is no longer trying to describe his beloved, only himself here. In my translation task I worked a bit on what word to use for “túnel.” “Tunnel” is the obvious choice, but I never liked it as word-music when I tried it. I chose “cave” instead, preserving the anima subtext I sensed.

The third stanza, problematic again. It opens well, and as word-music compels. The “de leche ávida y firme” phrase is rendered by all the other translators in whatever their best Surrealistic/poetic manner finds. I’m more base it seems, and was struck by secondary Spanish meanings for “leche.” I could also have chosen the idiomatic meaning of smacking or bumping, even though other translators haven’t. Third line? If she was to speak: “Neruda, my absent eyes are up here!”   Fourth line. “Rosey pubis” is just bad, and I couldn’t justify linguistically my alternative.

Last stanza. How self-aware was Neruda when he wrote this?** As he refrains on woman and body, he goes and drops in the “my woman” formulation with it. Given that in the course of this series of poems or even the rest of this stanza, this isn’t going to be a long-term commitment, I’m not sure how he gets the deed and mineral rights on his beloved’s mortal corpus, but if you like you can just say that I’m 2020 anachronistically considering 1924. The final three lines make plain, even if it’s lovely verse, that, well: a man’s gotta ramble, I can’t be satisfied, and the problems of us little people don’t amount to a hill of beans in this crazy world.

Am I being unfair to Neruda? Even here as a 19-year-old he’s an accomplished poet who found an avid audience that bonded with what they received in his art. When reading his Twenty Love Poems and Song of Despair   I came across as many “wow!” lines as problematic ones, and I wasn’t bored. Not everyone looking for a lover, much less a love poet, is going to ask for the correct dialectic to get them through the night.

A possible defense is that this isn’t poetry as memoir (a common form today) and that the woman in the poem seems soul-less and silent because she is intentionally an abstracted metaphor. As I said when we started—whatever, she is now.

For my performance I chose not to go romantic for this as I did with “Poem 20”  last time. While there is a tender cello present, the main music is carried by pianos playing astringently. I performed it more as if it was a Browning-like dramatic monolog—for monolog it is. Feel free to hiss or sigh with the character of this very young dramatis personae.***  The text in Neruda’s original Spanish alongside another English translation is here. The player gadget to hear my performance is below. If you’re reading this in some blog reading software you may not see the player gadget, but this highlighted hyperlink should alternatively play the the performance.

*In “Poem 15”  the poet says to her “I like for you to be still: it is as though you were absent,/distant and full of sorrow as though you had died.” This may be taking a Goth stance a bit too far.

**In “Poem 14”  he shows a moment of sympathy, “How you must have suffered getting accustomed to me.”

***Former REM frontman Michael Stipe had one of those interviews via a standardized questionnaire recently. To the question “To whom would you most like to say sorry, and why?” he answered: