I’ve been looking forward to this Emily Dickinson biopic since I first heard of it a few months back. I acknowledge the difficulty of making a film about writers, particularly if the film wants to give due weight to their writing, the least cinematic of art forms—but just because it’s difficult doesn’t mean it shouldn’t be tried.

From indications I was expecting Wild Nights with Emily to be irreverent, but I often like some irreverence, even about things I admire. The advance publicity used the hook that it was going to go strong on the theory that Emily Dickinson and Susan Gilbert were lovers. That’s a legitimate theory, with evidence to support it, but the trailer and the promo clip I saw indicated it was going to be one of those “Hey, famous artists go through all the wacky and awkward stuff we do, especially when they fall in love.”

Does that sort of thing diminish art or the people that make it? We should laugh at both devils and angels some of the time (just not all the time). For an example of literary irreverence that worked for me, I’ll point out Upstart Crow,  a series that turned Shakespeare into something between the Dick Van Dyke Show  and 30 Rock  using a passel of modern critical theories as comic premises. 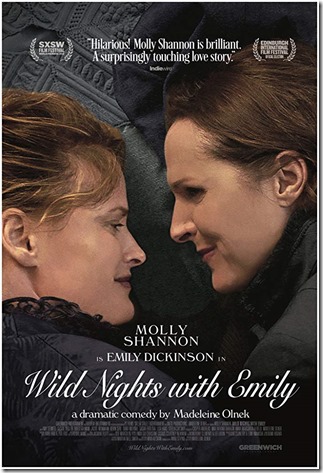 What’s with all the black. More Emily Dickinson goth moves?

As it turns out, Wild Nights with Emily  didn’t consistently work for me, though I’m glad I saw it and I admire the effort. It’s awkward in ways that alternately charm, puzzle, and just seem off. It tries for a complex structure that jumbles time-lines back and forth and the individual scenes seem very separate. There’s little character development, little sense of change or dynamics of Character A’s actions changing the course of Character B’s life outlook, even in the central love story. We see a scene or two of Susan and Emily falling in love as teenagers, but there’s no attempt to explain why Susan or Emily were attracted to each other instead of someone else, they just are. Nor is this attempted for any of the other relationships—some kind of lust/attraction spark occurs and bang they go off. It’s consistent enough that I think the writer/director Madeleine Olnek is making a point of this. Oddly, these connections go badly for the couples other than Susan and Emily. It’s kind of a bokeh effect thing: our lead couple just want each other, and that sort of works out, and everyone else is just mindlessly and brainlessly lusting.

Indeed, my impression was that the writer/director really was interested in making a point, or series of points. The film isn’t a biographical narrative* or love story or sex-positive comedy or an exploration of creativity, it’s more an illustrated lecture with actors given to illustrate those points. The disconnection of the scenes is just a new slide in the deck being shown. The points are all worthy ones, most of which I’d agree with. Dickinson was a mocker and questioner, not a conventional sentimentalist. No one understood how revolutionary her poetry was. Families are weird, and their secrets show that. The Patriarchy is blind to a whole lot of things.

Some of the scenes work well as illustrations for me. Some don’t. Your mileage may vary. Many scenes use humor to make their point. A couple of the scenes were Dada-weird (e.g. Lavinia and her fake cat). Others are very much “see the broadly underlined point.” Some are emotionally riveting in the same way that actors doing single scene can be as they instantly inhabit a character, but again, the film isn’t really a narrative. Nor does it go out of its way to say “I’m not a narrative” like other attempts to subvert the artist biopic genre like 32 Short Films about Glenn Gould  or  I’m Not There.  If you go to see it, go with that expectation and I think you’ll be more primed to absorb what it’s trying to do.

A couple of Olnek’s points I’m less sure of (she may be right, I’m no Dickinson scholar). She seems to be overcorrecting on the Dickinson was a hermit, always sequestered in her room thing. As far as her film shows it, it’s all a misunderstanding, and she just didn’t like Mabel Todd. The impression I get from my Dickinson biography research is that a much more sociable person did become increasingly withdrawn as she aged. And she seems to be saying that Dickinson directly sought publication, only to be rebuffed by the Philistines. Maybe there’s an earlier period I’m unaware of, but the testimony of among others, Susan Gilbert Dickenson herself included, was that the scattered publication of 11 or so poems in her lifetime was largely due to the efforts of others which Dickinson did not encourage.

A few times in the movie they use Dickinson’s poetry, spoken and with subtitles with scenes portraying something they relate to the poems. I’m favorable to that tactic—after all, the Parlando Project is doing that with music instead of film. I think that works in the film. The “Hope’ is a thing with feathers”  and “I died for beauty but was scarce”  examples were particularly memorable for me.

That’s my reaction to the film. I appreciate the effort that went into it, and the task it set out for itself isn’t easy.  Is it the best possible way to spread greater, deeper appreciation of Dickinson? Hell if I know. Worth a try.

*Maybe it’s just me, but has anyone done a straightforward Emily Dickinson timeline that says what Emily Dickinson was thought to be doing year to year? A good one would include links to the various theories regarding people that came and went in her life. I find some of this hard to keep straight and the non-linear choice of this movie obviously didn’t aim to help me. For example, the Mabel Todd/Austin Dickinson affair that started in 1882 happened very late in Emily’s life, more than a decade after she’s thought to have written the vast majority of her poems. And the first meeting with Thomas Wentworth Higginson in 1862 was when her amazing productivity was accelerating.

By the way the film’s bokeh effect makes Higginson and Helen Hunt Jackson look like comic idiots. Given the heroic things they tried to do in their time, I give them a little more credit than that.