I’m not a fully-qualified Science/Speculative Fiction fan, though I did read it when I ran into it as a young man. Dave Moore, whose voice, songs and keyboard playing you’ll hear from time to time here, read more of it. I’m not sure if Dave introduced me to Harlan Ellison’s work, but my memory is that he did loan me a copy of Dangerous Visions  back in the Sixties. In that 1967 anthology, Ellison made the case that SF was the heir to a Modernist tradition of fiction using outrageous and unique situations—he was claiming SF could be more Kafka than L. Sprague de Camp.

It’s unlikely he was the only person thinking along those lines, but he certainly helped to popularize the idea at a time when an aging generation of SF writers, steeped in pulp magazines and cents-per-word paychecks were in danger of losing touch with the younger post-WWII generation who were more likely to be college educated and experienced in some chemically enhanced inner-space traveling. 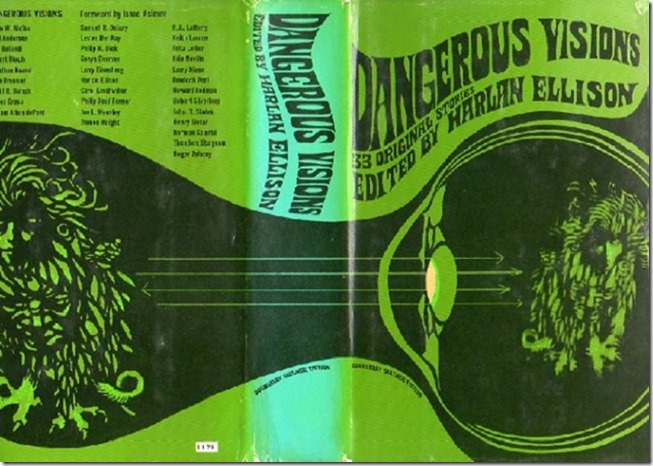 Used copies may have slight foxing (or are they cannabis stains?)

Ellison was an any-world-class curmudgeon. His non-fiction writing is full of enthusiasms and invective, with almost no middle ground. At times he reminds me of another late 20th Century artist/social critic: Frank Zappa. Both of them liked to remark that “The two most common elements in the universe are hydrogen and stupidity.” Over the course of his career Ellison seemed to transform from a US-born angry young man punching mostly up to a more generalized misanthropy, where at appearances he would sometimes riff like an insult comic. He once called my late wife who he had just met at an event, “Cathy Carbohydrate.”

These two things worked together. SF had always had a darker side, and the border between it and the gothic strain of fantasy or noir-ish mystery was crossed back and forth often. I believe a utopian, Transcendentalist wing of SF remains, but the terms SF and dystopia now seem to follow one another almost automatically.

Is this the artists’ fault or ours? A large question that.

Thursday night I read that Harlan Ellison had died. Friday I was booked to record with Dave. Friday morning, as I slept, I dreamed that Dave was showing me a binder full of typed manuscripts of stories he had written. As he flipped the pages I read parts of the stories. In style, they were the sort of thing a teenager just starting out would have written, so in the dream’s timeline they would have been written in the Sixties. In the dream, Dave, after learning of Ellison’s death, was telling me that Harlan Ellison had looked over these stories, and that Ellison didn’t like them very much, though he thought the last one had some promise. There was a short, encouraging note from Ellison scrawled in the margin on a page in the story. As I glanced up toward the middle of the page, I saw some dialog in which a character in the story was saying something. The character in this non-existent dream-story was named Octavia Butler.

Now I remind you: this is a dream. Dave never had Ellison critique any early stories he wrote. In the dream, these stories existed, in the waking world they don’t. But here’s the funny thing. I told you at the start that I’m not a fully-qualified SF fan. If you had mentioned Octavia Butler to me on Friday, the only impression I would have was that she was a writer. I wouldn’t have been able to name any of her work or have been able to place her in a genre. In the dream, I just thought it odd that Dave was using a writer’s name as a character in a story that the dream had had him writing 50 years ago. I was about to ask him why, when I woke up. 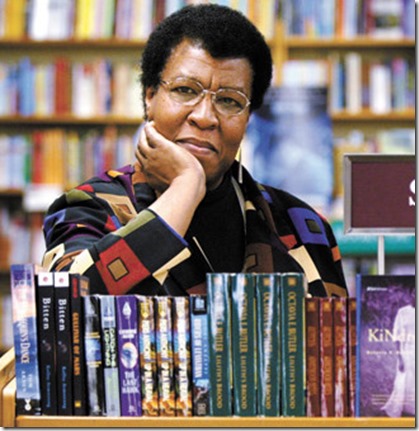 Octavia Butler, before or after she was in my dream

I biked off for breakfast and hurriedly came back to write the piece you can listen to below.  Looking for info I might use in my song, I searched on Octavia Butler. In the Sixties, Butler was a young, unsure author, fearing that she was too “ugly and stupid, clumsy, and socially hopeless.” While she was still in school, Harlan Ellison, this man with a reputation as a scouring critic, had told her she had promise and should go to the Clarion Conference and present her work there, a suggestion that lead to her first publication in 1971.

Nothing there I could use in the song as it turns out, but strangely this was also nothing I knew when I had dreamed that dream early in the morning. I did use one bit I found in my searching: an interview with my former co-worker John Rabe that revealed that Ellison was still using a typewriter as his writing machine in the 21st Century. I thought of those older generation pulp writers and their per-word paychecks.

That afternoon, Dave and I recorded “The Apotheosis of Harlan Ellison.”  It turned out that in the waking world, Dave had not heard yet that Ellison had died. The player gadget below will let you hear it—though not on your typewriter.

One thought on “The Apotheosis of Harlan Ellison”