Let us for a moment consider length in English language poetry. Despite the customary inclusion of one or two very short poems in most American poetry anthologies (“The Red Wheelbarrow”   or “In A Station of the Metro”  typically), one can easily derive from them an accumulated mainstream judgement that poems shorter than a sonnet’s 14 lines are judged slighter expressions of less merit.

Similarly, in music, for all the glories of the mid-20th Century’s two minute and forty second 45 RPM single, serious composed music demonstrates greater regard for pieces of at least middling length, and the 20 to 70-minute symphony is still regarded with reverence. And so on with improvised music practice, which seem to find the five-minute mark as a minimum. Even the later 20th Century movement that got called “Minimalism” worked the idea of fewer motifs considered at greater length.

And so it is when we consider swans, the largest waterfowl, in words. Our last post and audio piece used Edna St. Vincent Millay’s “Wild Swans,”   a fine poem, but if one looks at the accumulated attention gathered in the roughly 100 years since each was written, Millay’s “Wild Swans”  is overshadowed by William Butler Yeats’ “The Wild Swans at Coole.”

Yeats’ poem is worthy of this attention, and he does pack a lot into his mid-length 30-line poem, written by a late middle-aged poet as his colonized country has experienced a failed revolution and his world has seen the shocking mechanized slaughter of the original World War. All that violence is subtext—not once is it mentioned—and as we read or listen to it now, that violence may no longer be apparent, though the background of disappointment remains.

Millay presents the swans as something she cannot comprehend as they fly over her, with her disappointment, her heart at present “a house without air.” Yeats on the other hand presents an almost OCD-level attention with the swimming swans at the beginning of his poem. He has apparently been counting them on each visit for 19 years. He’s going to count them again. And then they fly off in clamor before he can finish his count even though he reports an exact number.

The specificity of those two numbers is curious. Is the 19 years of visits to Coole in Ireland a mere biographical fact? Are the “nine-and-fifty swans” he’s counted an actual census he took regularly? I do not know. Given that Yeats had a long interest in occultism, there may be some occult significance in one or both of those numbers. They are both large numbers for the things they measure: anything one has done for 19 years has a resonance for that long a duration, and given how magnificent the sight of a few swans gliding on the water are, the idea of 59 of them viewed together is an image of overwhelming swan-ishness.

What strikes me most about the two numbers subliminal effect is that both end in 9, and so, seem to be almost at an ending. As the poem develops, Yeats returns to that effect.

These details, written in Yeats typical lyrical fluency, accumulate throughout the poem. The lake and sky repeating each other. 59 swans. The “bell-beat” weight of their wings as they heavily swing them into flight, equally straining, equally coalescing into aerial rings. Their companionable swimming on the cold water “lover by lover”—ah, there’s that 59 again, an odd number—at least one swan has no mate.

But he doesn’t say that. The poem is all its music, the image after image, the beauty after beauty mixed with the undercurrent of impossibility of its permanency. The world will change, the poet or the swans will not return. 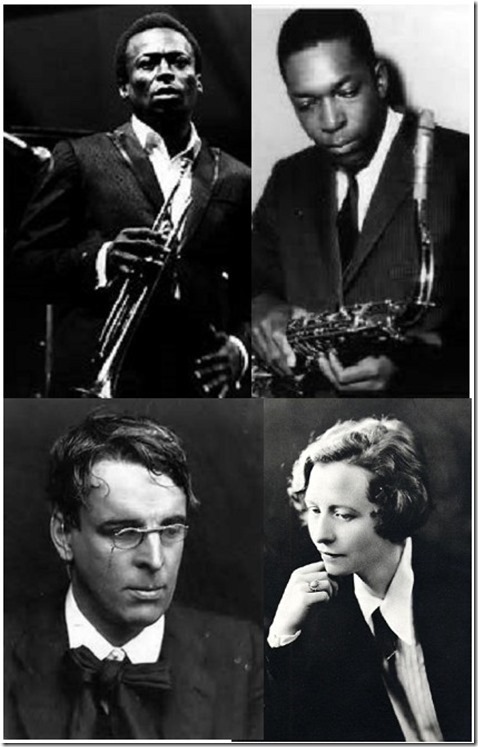 John Coltrane: “Sometimes when I’m playing there are always new sounds to imagine, new feelings to get at. There’s never any end.”

Miles Davis: “Try taking the f’ing horn out of your mouth”

So, do the 30 lines of Yeats mean it’s a greater poem than the 8 lines of Millay, an objective judgement causing its greater fame?

Why do I have to choose? If Yeats had written 60 or 6,000 lines would “The Wild Swans at Coole”  be better? If Millay had written 80 lines, would her “Wild Swans”  have shown greater skill? We can derive from how anthologists, poetry critics and audiences respond what their preferences are, even those they never articulate explicitly, but in the end it is the longer poems that make the short poems concise and the short poems that make the longer poems seem overwhelming.

How many times have I listened to “Kind of Blue?”  Does Miles Davis need to play more notes? Does John Coltrane need to play fewer? Looking at these two poems about swans, they illuminate each other.

The gadget below will play my performance of Yeats’ “The Wild Swans at Coole.”