Obscurity in modernist poetry is a funny issue. What makes some writing hard to grasp, difficult to understand? Esoteric and little-known words like Wallace Stevens loved? Far-flung allusions to works in several languages like T. S. Eliot was prone to? Exploding normal written syntax and logical flow as Gertrude Stein did? Taking images into realms where direct one-to-one symbolic meaning is not only impossible, but more than likely, not the aim, as Tristan Tzara or Paul Éluard demonstrate? Presenting things “slant” in iconoclastic riddles as Emily Dickinson could? Writing works of epic length that few if any human minds can comprehend in their whole, like the Cantos of Ezra Pound?

And then there’s this poem, the basis of today’s piece, William Carlos Williams’ “The Red Wheelbarrow.” 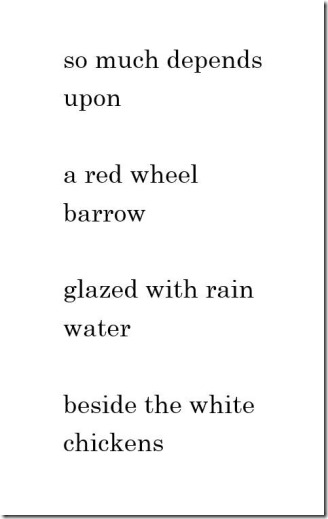 The whole of it: 16 words, no punctuation, all lower-case

From empirical evidence you could say that it’s the very peak of the canon of modern American poetry. Remember that compiled count of the poems that appeared most often in poetry anthologies, most of which were explicitly focused on modern American poetry? “The Red Wheelbarrow”  is alone at the top of that list, included in over half of the anthologies counted.

Does that make it a “best loved poem”? Does it even assure that critics consider it great, much less the greatest? No, it does not. I think I first ran into it as a teenage student, in one of those anthologies used in some English literature class. Did my young teacher point it out as a poem of special merit? Did I view it as such? No. If I can trust my memory, if it was discussed at all, it was as if it was some kind of stunt, an intended provocation that so short and mundane a piece could be considered artful. “Now class, let’s get back to T. S. Eliot and Wallace Stevens.”

And how about critics? They largely part like the Red Sea on “The Red Wheelbarrow”.  If we look to one side, in among the mollusks and manta rays now behind the water curtain of the divided sea, we find those who care little for it. There’s nothing there demanding to be written about. No virtuosity is demonstrated to be noted and admired. And what important point is it making, other than, well, no point at all?

So, we turn to the other side, those swimming with bemused dolphins who wonder if they could leap across the band of Israelites walking on damp seabed, those critics hoping to demonstrate their microscopic perception of the hidden art in this terribly short and compressed poem. Carol Rumens is concise and representative of this when she says of Williams’ poem “This is his manifesto, surely–a poem quietly declaring how modern poetry works.” And she also warns “A naïve reading could take it as a comment about the great usefulness of wheelbarrows on small-holdings where chickens are kept.”

And then, here I am, now. No longer the teenage student who was sure someone had figured these things out, and I need only to find them. I can’t see far enough ahead where Moses and Aaron are, nor can I see far enough back how close Pharaoh and those charioteers are getting. I’ve got my hasty bread and a few grabbed things in my little cart, pushing it across the mud. I think I must be naïve. Yes, Williams is a modernist, as committed to the new way of writing as clearly as possible, a proclaimer of “No ideas except in things,” which means in retrograde, the things must be the ideas. If he had wanted to write a manifesto, he could, and did in the other poem that stated that dictum.

The obscurity in this poem is that there is no obscurity other than what we bring to it externally. There is no allusive, secret meaning, other than the secrets we’ve kept from ourselves, of our tools and our companion responsibilities.

Yes, there is art in these 16 words: the line breaks that ask us to hold our gaze, even in the middle of words, the “so much depends” warning that bids us look. The choice to look at just these simple common things, is a choice, is an idea. I think the dolphin side of the parted sea has smarter companions than the mollusks’ side; but I am looking down at my wheelbarrow, and Williams’ wheelbarrow, and saying naively, that it matters, even if I’m in the middle of the band, unable to see Pharaoh or Moses.

I’ve spent too long on the words again, but I feel I need to say a bit about the music I composed for my performance of “The Red Wheelbarrow.” I chose to use a twelve-tone row, a modernist musical idea from the same time as when Williams was writing the poem. It would be pretentious for me to say I got this from deep study of Schoenberg or Webern, though I’ve listened to a good deal of modernist music. However, “serialism” never stuck with me until I heard the prologue part of “This Town Is a Sealed Tuna Fish Sandwich” written by Frank Zappa. I’ve loved that piece from the first time I heard it.

Twelve-tone music subverts expectations of a tonal center or “important” scalar notes, so it can sound a little woozy or random, but, of course it has its pattern, by definition, which the mind’s ear can hear if you stop thinking in expectation of familiar patterns, which is the simple and profound thing it is asking you to do.

For those who’s blog readers can display it, you can click on the player to hear my performance of “The Red Wheelbarrow.”  No player visible? This highlighted hyperlink is another way to play it.

6 thoughts on “The Red Wheelbarrow”