There are so many ways to introduce the words used in this piece. I could say it’s an OG rap written in prison by a two-time ex-con who was executed for violating his parole. I could say it’s a piece by the poet who did more in his career outside of writing poetry than any other poet besides than the teenager who wrote “Frances.” I could say it’s the testimony of a soldier who had seen enough of war to cause PTSD many times over. There will be occasion to talk more about its author’s life later, so I’m going to ask your indulgence, and tell instead of how I first came upon this poem.

Oscar Williams lived until 1964, yet there are exactly as many photos

on the Internet of him as of Emily Dickinson, and hers aren’t grainy half-tones!

At the beginning of the 20th Century a boy was born in the Ukraine, and as a child he emigrated to New York City. Like many immigrants, he changed his name to sound more “American,” becoming Oscar Williams. His career was originally made in marketing/advertising, but he was also a poet. Then shortly after WWII he began to publish poetry anthologies in inexpensive editions, including very cheap paperbacks. Did he know from his marketing work that these would strike a chord in the post-war world of soldiers who became the first in their families to go to college on funds provided by the “GI Bill?” Did he suspect that the experience of the greater than “The Great War” war, and the Korean, Cold, and Vietnam wars that followed would create an audience wanting some human writing more varied than propaganda? Was the spreading middle-class of the post-war years creating a new, broader audience for poetry, like it did for hi-fi symphonies and literary novels? Who knows? Perhaps it was only Williams’ personal passion for poetry that motived him, but his inexpensive anthologies sold in the millions, a much greater number than anyone expected. 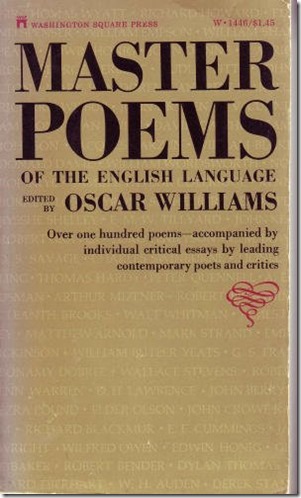 In 1968, in a college bookstore, I purchased a chunky paperback of one of these Oscar Williams’ anthologies: “Master Poems of the English Language.”  About a thousand pages, over a hundred poems, each introduced by an essay on the worth of the poem by another poet or critic, cover price $1.45. I purchased it because I was writing poetry and I wanted to know more about what it could do, and how it did it, and this seemed the best value on offer at the store. And it was. I don’t want to put-down teachers I’ve had, or other reading and face-to-face examples that have instructed me in those things, but that book, taken in at that time, gave me a firm starting point in writing poetry.

In 1951 when this bike of mine was made, Raleigh was more of a house-hold name

Written in 1618, today’s poem, “The Lie”  by Sir Walter Raleigh was one of the poems in that anthology, and one of Williams’ selections that I liked the best. Unlike some other poems I’ve featured here, it’s not widely anthologized, and Raleigh himself seems to have nearly fallen from the common British pantheon over the years. In 2002 the BBC conducted a poll on the 100 greatest Britons ever, and Raleigh snuck in at 93, just behind intricate fantasist J.R.R. Tolkien and 50 places behind that other great anthologist, John Peel.

When I first read “The Lie”  I was struck by how modern it felt. Yes, there are a few antique words and terms in there, but it’s remarkably plainspoken—and the speaking it’s plain about is the bane of hypocrisy, lack of principles, and double-dealing—all things Raleigh’s life taught him a lot about. After all, since Raleigh wrote this while in prison awaiting his execution, he did have the ultimate license to say what he really thinks.

To hear what Raleigh had to say and my performance of it, click on the player below. Warning, there’s a Mini-Moog solo partway through, which is not as bad a fate as a 17th century beheading, but it will not make you forget Keith Emerson’s on “Lucky Man”  either.

I promise you, we will end up today very close to the love song of the last episode, though we will travel a ways before we get there.

I’ve not featured any French writers yet with the Parlando Project, but as this summer has used the words of many 20th Century English poets, we may be overdue for that, as the start of that century found some of them looking to the French for some new ways to write.

French poets started to go “modern” before the British poets, around the same time that Emily Dickinson and Walt Whitman were making their own breaks with past practice in America, so they had a head start, and their avant-garde was way past the supply lines of conventional narrative and sentiment by the time the 20th Century really got rolling.  The absurd casualties of WWI, largely fought in France and its neighboring countries, and so deadly to some of the generation of men doomed to fight in it, only accelerated the modernist direction away from the kind of meaning you might find in a political speech or battle plans.

This summer, 50 years ago, the Polish-French writer Guillaume Apollinaire coined a new word to describe a new way to approach the world in words: “Surrealism.” A few years later, his term was taken up by a group of artists who went about trying to practice a new idea, presented in 1924 as if it was a political manifesto, to write and create from:

“…The actual functioning of thought. Dictated by thought, in the absence of any control exercised by reason, exempt from any aesthetic or moral concern.”

The Surrealists went on from there, going in various directions, becoming less an idea and more of a brand—but stop and think for a moment, that original idea, isn’t it powerful? The idea that there is a reality that we agree not to apprehend, not to speak of, that we constantly reframe our thoughts to, isn’t that idea political as well as aesthetic?

Today’s piece uses the words of one of the French Surrealists, Paul Éluard. Éluard, like many of the British poets of this era, was another veteran of WWI. One story of his war service was that, since he was a writer, his military superiors assigned him to the office tasked with writing the official letters to the relatives of the casualties, and such was the efficiency of modern war that he sometimes needed to write 150 of them a day. After a year of this, he asked to be sent to the frontline trenches.

Jean-Luc Godard’s film “Alphaville.”  “I love you” could be the ending.

I have exposed you several times this month to pieces about the horrors of war and slavery, but I also told you we must travel a ways to get to today’s piece. After the war, as a founding Surrealist, Éluard produced verse with strange images and seemingly arbitrary combinations—Surrealist tactics to break the conventions—but his great subject, against the night, pain, and suffering, was love. Perhaps after those 150-letters-a-day forced march, he too wanted to look to war’s opposite.

Paul Éluard and the beloved, Gala. Eyelids not visible in this picture.

“L’Amoureuse”  (The  Beloved) is one of Éluard’s most famous early works, and uses my English translation of his words. The LYL Band performance of it was recorded live several years ago. To hear it, use the player below.

The end of the poem I feature today (“A New Colossus”)  has become, slowly, over years, a sort of fourth American credo to go with the Declaration of Independence, the Constitution, and Lincoln’s Gettysburg Address, and yet it’s only its last lines that are widely known, thanks in part to a lovely musical setting of that part of the poem by popular songwriter Irving Berlin.

As a person who has edited other works for length to fit them into the focus of the Parlando Project, I can see why Berlin made his choice. The ending is  the payoff of the poem, a charged and memorable statement.  Most poets could only hope for as much as this: that many readers or listeners will remember at least a line or two of of what they wrote, even after hearing it but once.

Look, I know it’s a marvel of  classical Greek engineering,

but as an American. I think Jolly Green Giant and peas.

I am going to present the whole poem in my setting however. It’s only a sonnet, a 14 line poem after all, and there’s some good stuff in the setup. First off, it’s an independent American poem to its core, starting by dissing the glories of ancient European culture and one of the “7 Wonders of the Ancient World.” And its author, Emma Lazarus, also stands forthrightly for the power of women to express a controversial political opinion, though this poem was written in the 19th Century when women had no right to vote.  Although this is not a modernist poem, such as those that would be written 40 or 50 years later, the lesser-known part of the poem contains one powerful compressed image, a flame of fiercely desired freedom that is “imprisoned lightning.”

For Emma, Forever Ago. David Bowie was thinking of her in his last work “Lazarus”

Honoring that lightning image, I’ve chosen to not present this piece as a musty patriotic homily, but as the impassioned cry that it was meant to be—and besides, the sentiments of this poem are likely now as controversial as ever. Irving Berlin presented the excerpted ending as a chorus of hope. I take the whole of it and storm it with Telecasters, drums and bass.

To hear the audio piece, use the player that appears below.