Earlier this month I announced that my performance of Tristan Tzara’s “The Death of Apollinaire”  was the most popular piece here last fall. Seeing this, it’s past time to present a poem by Guillaume Apollinaire himself.

If one was to draw a graphical map of the French Modernists of the early 20th Century, corresponding to the English-speaking ones we’ve been talking about a lot here, Apollinaire would be at a central place like Ezra Pound. Apollinaire knew everybody, he influenced everybody; as a critic, he wrote about everybody. Although, like Pound, he held strong opinions about what a more modern art needed, what little I know about how he was experienced as a living artist says that he was also loved by most everybody that he met as well.

Like Tristan Tzara he was an example of a European, though his work was centered in Paris and he wrote largely in French. His mother’s family was Polish or Belarussian, depending on where the borders were drawn at any one time. His father’s background was never definitively known. Born likely in Italy, he had traveled and spent time in several countries, and spoke several languages, before settling in Paris before he was 20. 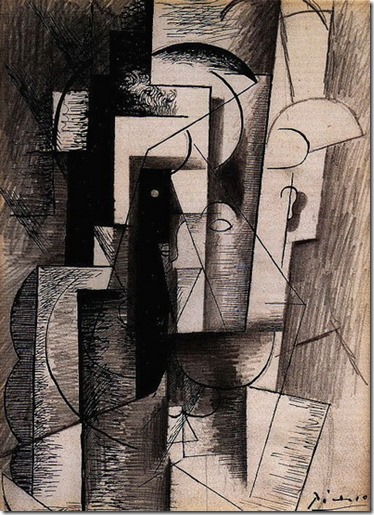 “Don’t you be L7!” Picasso’s cubist portrait of Apollinaire

In the visual arts, he invented the word Cubism, and he also was the first to call his work Surrealist. He knew modernists in music, like Satie. He knew the young artists, like Picasso, Chagall, Henri Roussseau. Dadaists considered him an influence and a co-conspirator.

In 1913 he published his best-known collection of poetry “Alcools”  (Alcool is the French word for alcohol). In it, Apollinaire set out his direction in modern poetry, using various forms, often imbued with contemporary colloquial speech and connections to modern technology and urban life. One tic he adopted in “Alcools:”  he dropped the punctuation from his poetry, emphasizing the flow of his words, an effect that could be seen as presaging a modern rapper’s unstoppable flow.

Am I guessing at that? It just so happens, I’m not. On Christmas Eve in 1913, Apollinaire was recorded reading one of the poems from “Alcools:” “Le Pont Mirabeau”  (Mirabeau Bridge), and that recording, encrusted though it is with the scratch and noise of time, survives.

So, today’s piece, with my music and my English translation of his words, leads off with Apollinaire’s own reading of his poem in French. 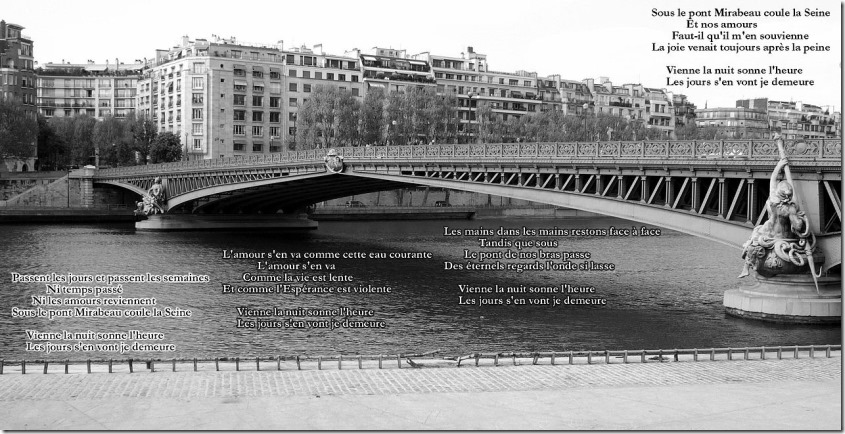 Mirabeau was the longest bridge in Paris when it was built using using new steel-reinforced methods in 1893.

Translating “Mirabeau Bridge”  was a challenge. Having heard and been transfixed by Apollinaire’s intensely rhymed and recited version, I had to bend my usual translation approach, which skips any attempt to keep the original “music” (the rhyme and meter) of the poem. And as I look at the many attempts to translate this poem to English, I see most tried to at least rhyme it. The Pogues used a rhymed English translation for a nice sung version a few years back.

As I approached “Mirabeau Bridge,”  I whined to my wife: “Richard F’ing Wilbur tried to translate this, and his  version is awkward—and Wilbur’s a master of poetics!”

Why do I usually skip trying to rhyme-up translations? It adds a great deal of difficulty to conveying the poem adequately. It almost always leads to awkward English, particularly when you try to follow a rhyme scheme from the French, with many more words that rhyme, using English, whose poetic tradition did not grow out of rhyming. Having been influenced by French poetry at an early age, when trying for similar effects I often use a variety of imperfect and near-rhymes, something an audience may accept or find grating, depending on their tastes, and that’s what I did here, along with a free and not regular rhyming scheme.

Give a listen. Consider it a trip-hop battle between Apollinaire and myself. Respect to Apollinaire. Can’t bust his moves.

As we go forward, following Leonard Cohen’s suggestion “Let Us Compare Mythologies,” I’m going to take you to another very dark place. If Siegfried Sassoon was hesitant to publish the last piece Christ and the Soldier, I too am somewhat hesitant to publish this piece, The Blood of Strangers. For The Blood of Strangers to work it must achieve its aim to be provocative. Let’s take that word seriously: it means to provoke you, it means to make you uncomfortable.

That’s one of the things art can choose to do, but it does not give me any lasting pleasure to do so. As an attempted artist I do not believe I must have any greater insight to things than you do, but the nature of art is to try convey things vividly, and in this case I’m going to convey two viewpoints on revolutionary violence.

A year ago, only hours after the terrorist attack on the rock concert at the Bataclan in Paris France, I was scheduled to record as part of the work of making this Parlando project combining spoken word and music. As a musician, I felt compelled to address this event simply and parochially because the attack intentionally targeted music. I chose to use two texts to examine that event: excerpts from a first-person account by Isobel Bowdery, a member of the audience attacked that night, and a section of Walt Whitman’s Leaves of Grass.

Bowdery’s account is to my mind extraordinary, even more so for having been composed so shortly after the attack. Whitman, in contrast, had much more time with his text, as he famously worked and reworked Leaves of Grass over his lifetime. The Whitman piece I used “France”  first appeared in Whitman’s 1860 third edition of Leaves of Grass and was retained in the final edition of 1891. Moreover, Whitman is particularly writing about the French Revolution, events already over 60 years old.

I believe I need say no more about Bowdery’s eloquent words. They are close enough to our time as to speak for themselves. Whitman’s are more problematic.

Modern American poetry has a father and a mother. Its mother is Emily Dickenson; its father is Walt Whitman. As a child, I can’t help but sometimes take after both parents. The Parlando project has already presented work of Dickenson, but this is the first piece we’ve published using Whitman—and this may be an unfortunate introduction, for Whitman’s France is a somewhat mythologized but unwavering appreciation of violence and revenge in the furtherance of a cause. Near the start I told you that I would not tell you what to think of this, but in the just-hours-past the Bataclan attack I was appalled at Whitman.

I suggest at this point, assuming you are prepared to visit a dark place, that you listen to The Blood of Strangers now and have your own experience of it. Musically this is another piece that takes after The Velvet Underground, a band I’ve talked about before this. My intent in speaking the two texts at the same time was not only a homage to a tactic the Velvets used, it was aimed at breaking up the flow of either text so that you will not experience them in isolation from each other, or as a logical “Point Counterpoint” debate, but rather a simultaneous experience in two different frames. The last half of the piece is an “instrumental” where The LYL Band gets to synthesize their feelings in the aftermath of that attack speaking only with music.

OK, if you’re still reading, what can I say in defense of Whitman? 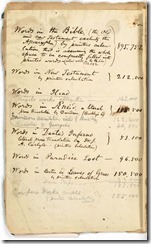 Whitman wanted Leaves of Grass to be all-inclusive. That was one of his core ideas. And this piece, France, was only one small part of this great, lifelong work. In his own copy of the 1860 edition that introduced this piece, he wrote down a table of the word counts of that edition of Leaves of Grass compared to other epic poetic works, proudly noting that he had already exceeded the word counts of the Bible, the Aeneid, Dante’s Inferno, and Paradise Lost. His radical inclusiveness wanted to take in all manner of despised and un-praised things in his great work. Although writing 60 years after the end of the French Revolution, he is writing on the eve of America’s great blood bath, the Civil War. So, as he continued to work on Leaves of Grass, where he kept and expanded the piece called France, he was intimately acquainted with the results of gunfire and bombs. I often thought of that Whitman, the wound-dresser, when I myself was applying bandages or tending to the ill and injured. Whitman famously declared: